Yeah, we probably missed someone but maybe next time they'll stop by and say "hello!"

Just for grins, kinda "Blast from the Past" race-start picture found on the main page of the race's website. Our photographer identified Marc Pelerin '00, Coach Shaklee '73, Matt McCarroll '09, Evan Stone '09, Mike Malloy '09, and that may be a young Shawn Wilson to Coach Shaklee's left. Probably 2009.

The 2019 race details at: SJ Timing. Also, there's a YouTube Video! Simple click the video link at the top left of the results page or go to: YouTube.

-- On August 23, 2019, Alum Matt Smith '18 of The College of New Jersey competed in the team's annual 5K time trial and he finished 17th overall in 16:41, a slight PR. He reported to Coach Shaklee that it was evenly run and "probably the easiest a 5K has ever felt."

-- On September 7, 2019, Alum Justin Kelly '18 of Stony Brook University, stayed at home again for the Stony Brook University Wolfie Cross Country Invitational! Justin competed in the 6-team 8K championship race, finishing in 5th place while clocking 25:58 (5:14 pace). His team easily won the event! The pictures below came from the Stony Brook website: the first taken elsewhere on August 31, 2019; the second taken at this event. Details at: Stony Brook. 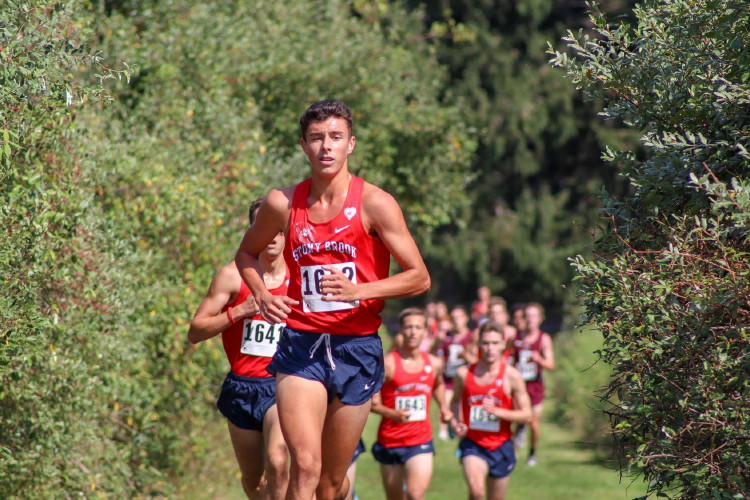 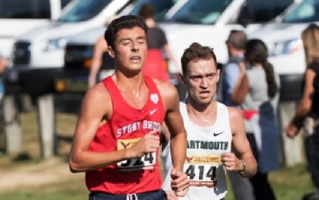 -- On September 7, 2019, Alum Jack Shea '17 of Northern Arizona University, opened his 2019 season in the 39th Annual George Kyte Classic at Buffalo Park, Flagstaff, Arizona! Typically, this is a low-key "rust-buster" but this year was unusual because, besides the usual lollypop teams, one of the top distance teams in Japan, Tokai University, joined the competition! The Japanese were in Flagstaff for a month to train at altitude and they developed a working relationship with NAU. Their participation evolved out of this relationship with NAU. Now, everyone had to step-up to address this challenge! The final score showed NAU with 25 points followed by Tokai with 30. It was as hard as the score suggests! Jack raced the 4.5 mile course in 23:30 (5:13 pace), finishing in 18th overall! The pictures are from NAU. Official results at: WingFoot. LetsRun provided a great story on the event: HERE, and FloTrack has a very cool "Workout Wednesday" video featuring NAU that includes Jack!: FloTrack. 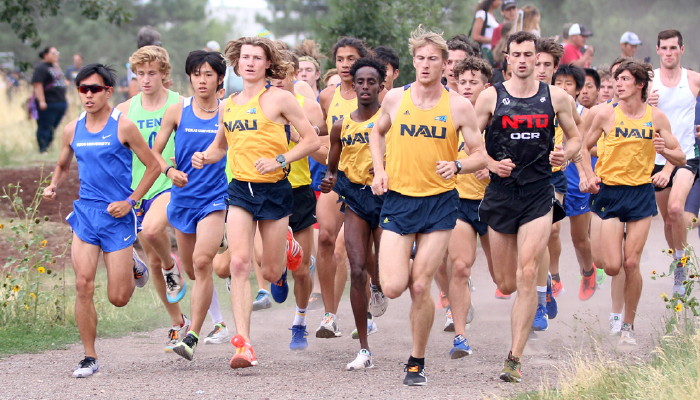 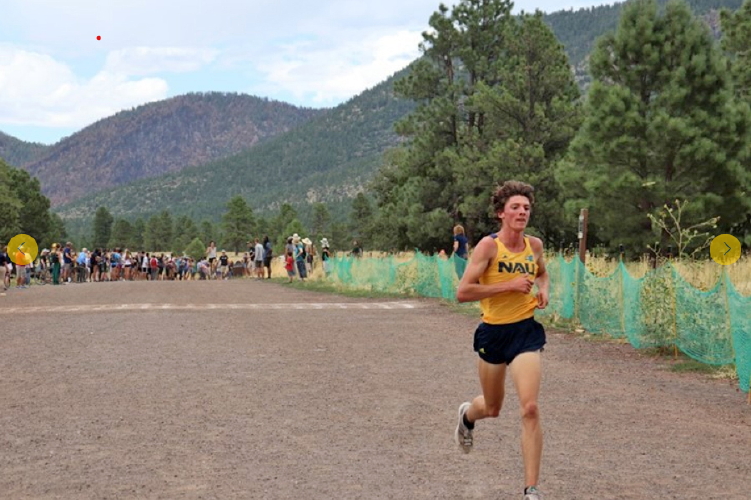 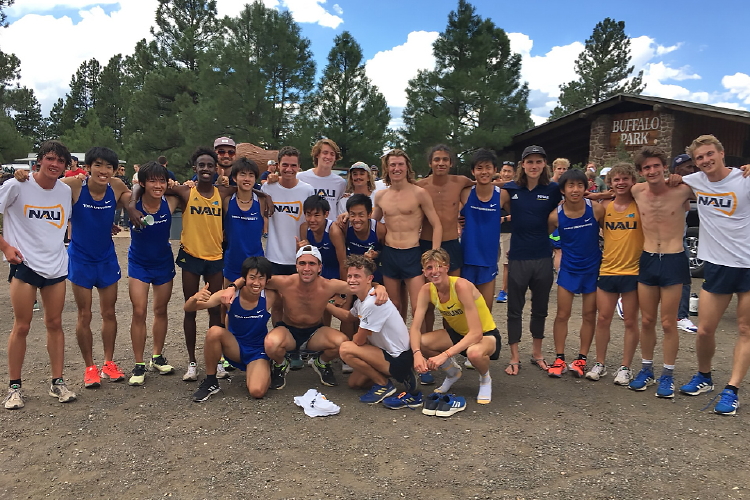 Whoever runs NAU's Cross Country and Track "communications department" is a genius! Skim through their Twitter account and you'll appreciate the time spent showing "what a crappy place" ( ! ) NAU and Arizona are to live and train! For example, check out this team picture taken while at the Grand Canyon for training! Ho-hum. 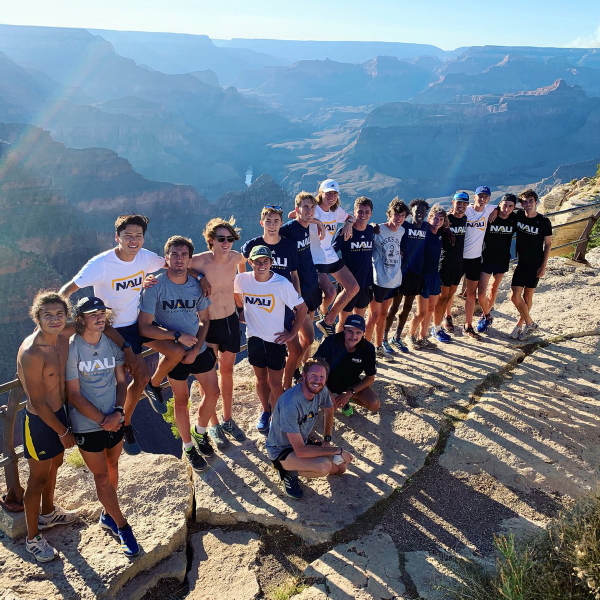 -- On September 14, 2019, Alum Joe Halin '00 was inducted into the Cherokee Athletic Hall of Fame as a significant figure on the Track and Cross Country teams! Joe played a major role in Cherokee's three-year winning streak as the Group IV State Champions, including, in his senior year, he became the individual Group IV Cross Country Champion! Joe is a well-known Cherokee graduate who set records at Applachian State University and continued to race well after his college graduation! Joe coached a few years at Moorestown High School before taking a full-time job at the Moorestown Running Company, and then, after marrying and having children, changed his career to nursing. Congratulations, Joe! The pictures on the site weren't great "back-in-the-day" but, if you go back over the Alums Pages in the first years of this website, you'll see Joe's name mentioned often! Coach Shaklee made the introduction at the event and his remarks are HERE! This picture from the Cherokee website shows Joe third from the left at the event. 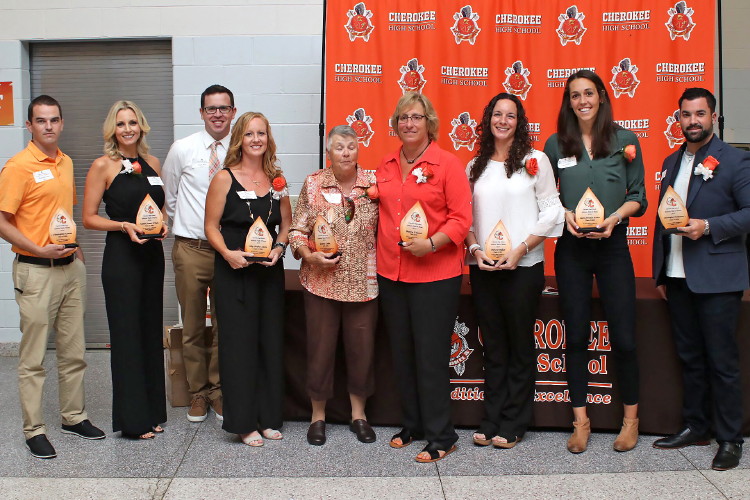 -- On September 17, 2019, the U.S. Track & Field and Cross Country Coaches Association released its latest National Coaches' Poll and the Northern Arizona University XC team remained in the top spot in the Division I rankings for the 23rd consecutive week! NAU's Twitter page made the announcement accompanied by yet another picture featuring Jack! Really! Who's their photographer, Jack's aunt? 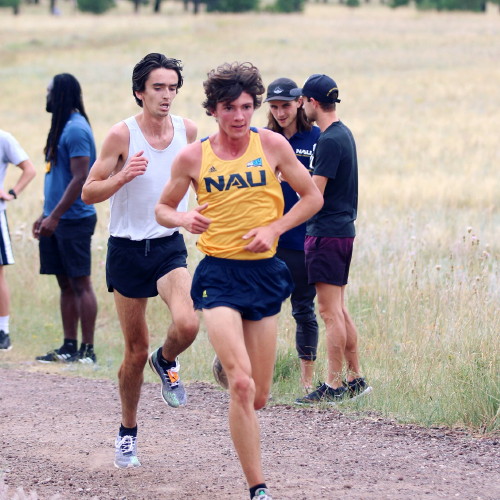 -- On September 20, 2019, TCNJ posted their 2019 Men's Team Photo and two of our athletes are missing! Nick Falk is at TCNJ but is not out for the team this year so that's at least understandable but Mike Iannotta is out for the team and is MIA! Always bad to be listed as "not pictured" on the team picture!

-- On October 5, 2019, Alum Brandon Marks '18 Rensselaer Polytechnic Institute (RPI) traveled to Kentucky for the Louisville Classic, an opportunity for the team to race the upcoming DIV III Nat's, where he raced the 8K Blue Race in 25:50 (5:12 pace) and finished 64th/516 overall. Details at: Record Timing.

-- On October 5, 2019, Alum Justin Kelly '18 of Stony Brook University, apparently didn't race with his team at the Paul Short but he appeared in the picture the university website attached to their story. Next he'll be shown in the 2019 World Cross Country Championships! GO JUSTIN! 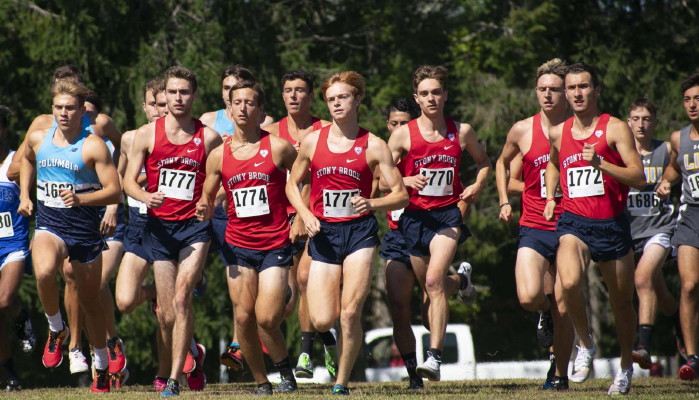 -- On September 18, 2019, Alum Jack Shea '17 of Northern Arizona University, traveled to Madison, Wisconsin for the Nuttycombe Invitational. Jack raced in the B 8000m race, finishing 33rd/103 overall in 25.12.6 (pace 5:04). His team won both the B and the A races, the 4th time in a row for the A squad! In case you haven't noticed, the team is scary good! Pictures grabbed from NAU sources. Details at: FloTrack. 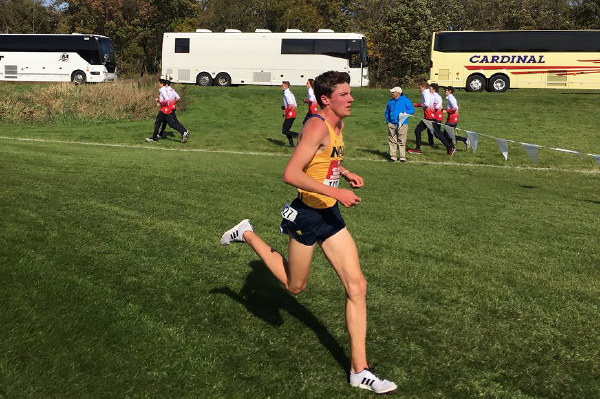 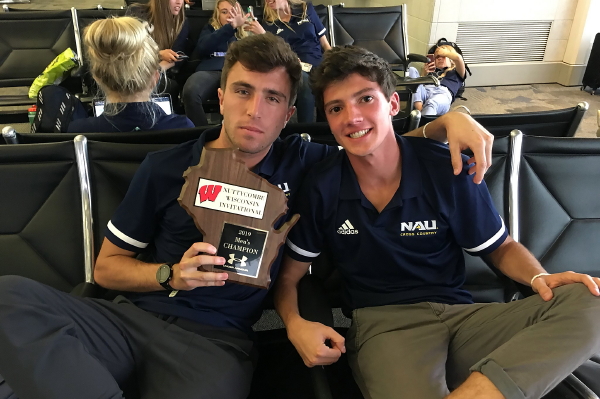 -- On November 2, 2019, Alum Jack Shea '17 of Northern Arizona University, traveled to a freezing cold and snowy Boomerang Golf Course in Greeley, Colorado for the 11-team, 8K Big Sky Conference XC Championships, where his team won their 4th straight (and 29th overall) conference title! Jack took 5th on his team, 12th/84 overall in 27:26.6 (5:32 pace). For Northern Arizona, times were unimportant. As Coach Michael Smith said, "The true nature of cross country is this kind of racing in brutal conditions. This is what the purity of the sport is. We take times and throw them out the window and teach our runners to compete with each other and against themselves." Picture from NAU Twitter. Details at: TFRRS. 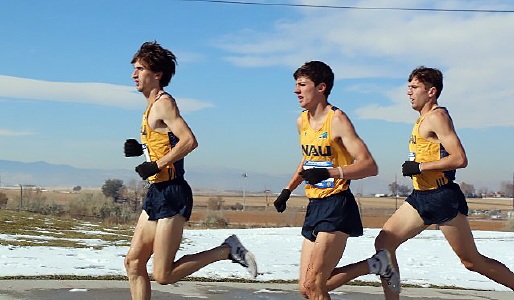 -- On November 2, 2019, Alum Brandon Marks '18 Rensselaer Polytechnic Institute (RPI) traveled to the Bard College, Annandale-On-Hudson, in New York State for the 9-team, 8K Liberty League Cross Country Championship. Brandon's team won the event, while Brandon finsihed in 33rd/115 overall in 27:06.4 (5:28 pace). Team picture is from the RPI website and it appears they should be the Lumberjacks and not the Engineers! Details at: TFRRS. 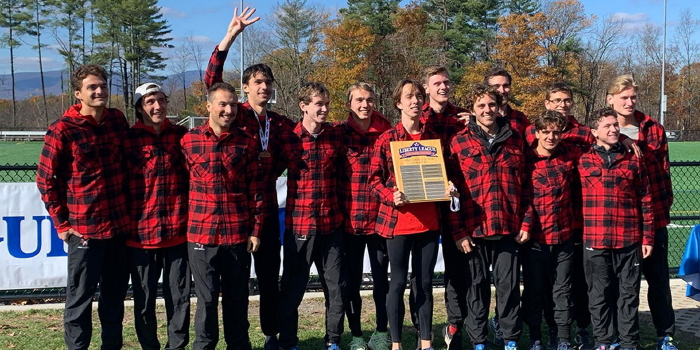 -- On November 16, 2019, Alum Mike Zurzolo '17 of TCNJ, traveled to St. Lawrence University in Canton, NY (where, you ask? It's conveniently located in the US northeast of Lake Ontario!) for the snowy and cold NCAA DIV III Atlantic Regional Cross Country Championships. Mike finished the 8K race in 62nd/300 overall, 4th on his team, clocking 26:28.9 (pace 5:20). His team finished 7th out of 42 teams. In passing, Alum Brandon Marks' '18 team, Rensselaer Polytechnic Institute (RPI), competed in the same race, finished 2nd and advanced to Nats! Brandon, himself, did not race but he cleverly made it to the awards stage! Details at: TCNJ Athletics.

-- On December 6, 2019, Alum Justin Kelly '18 of Stony Brook University, traveled to the Fastrack Season Opener at the Ocean Breeze Athletic Complex in Staton Island, NY. Apparently, the coach hates him because he gave him the 5K to open his Indoor Season but Justin is listed as DNF so we'll have to do some research here! Details at: Ocean Breeze

-- On December 14, 2019, Alum Lucciano Pizarro '19 of Penn State University, stayed at home and competed in the Blue & White Intrasquad Meet, his first appearance in a college event! Luch put the college Shot a decent 15.08m (49' 5.7") and finished a close 5th/5 overall! GO LUCH! Go PSU Sports. Lifted this mugshot from PSU to show how much he has changed . . . yeah, not a bit! 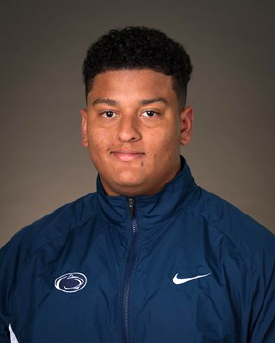 -- On December 14, 2019, Alum Tray Cabbagestalk '19 of the Indiana Institute of Technology, took a short trip to the near-by Turnstone Athletic Center for the Strive for Greatness Invitational. Tray competed (unattached) in the Triple Jump where he cleared 12.81m (42' 0.3") and finished 6th/10 overall. Details at: TFRRS. Another mugshot just to show we have the right guy! 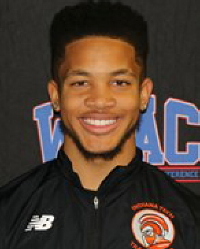 -- On January 5, 2020, the Burlington County Track Coaches Association announced the Burlington County All-Decade Cross Country Team that included a few of Cherokee's finest! First and foremost is Shawn Wilson '13 selected as the Runner of the Decade, followed by Justin Kelly '18, Jack Shea '17, and Ethan Wechsler '20! Others on the team included Austin Gabay '20 and Mike Ungvarsky '17 of Cinnaminson; and Connor Herr '12 of Shawnee. 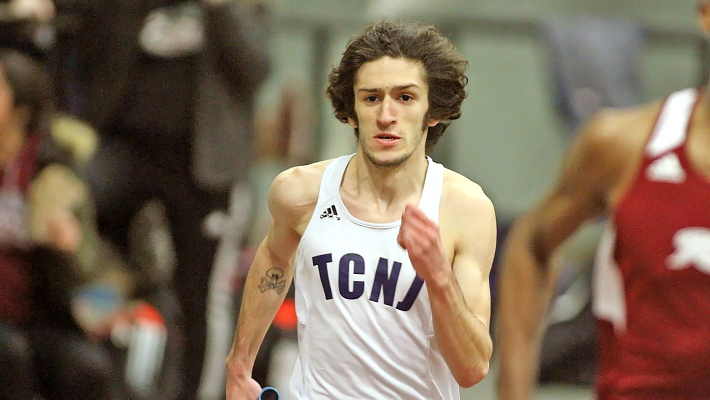 -- On January 18, 2020, Alum Brandon Marks '18 of Rensselaer Polytechnic Institute (RPI), traveled to the Hutton Sports Center at Utica College for the Utica College Invitational. Brandon raced the Mile in 4:32.59, finishing in 18th/47 overall. The Mile looked like a workout for RPI as there were 12 from RPI in the event, with the winner in 4:15.96 and then 8 ahead of Brandon in the 4:20's. Details at: Leone Timing.

-- On January 18, 2020, Alum Tray Cabbagestalk '19 of the Indiana Institute of Technology, traveled all of 4 miles to the Lutheran Health Fieldhouse in Fort Wayne, Indiana for the Mastodon Invitational, hosted by Purdue University, Ft Wayne. Tray competed in the Triple Jump where he cleared 12.33m (10' 5") and finished 5th/5 overall. FYI, Tray's career will be difficult to follow because, so far, he is listed on results sheets as "Tramil Cabbagestalk" and "Trey Cabbagestalk", which we can handle but this week he was listed as "Tray Cablestalk." Search engines get confused, not to mention searchers! Details at: Indiana Tech.

-- On January 25, 2020, Alum Brandon Marks '18 of Rensselaer Polytechnic Institute (RPI), traveled to the New Balance Foundation Track at Middlebury College for the Middlebury Invitational. Brandon raced the 1600m in 4:32.14, finishing 9th/36 overall. Again, the 1600m looked like a workout for the RPI team as 14 of the 36 competitors were "Engineers!" Details at: RPI Athletics.

-- On January 30, 2020, Alum Justin Kelly '18 of Stony Brook University, was scheduled to compete at the Ocean Breeze Athletic Center in the METS Indoor Track and Field Championships but he DNS. Results at: TFRRS.

-- On February 1, 2020, Alum Brandon Marks '18 of Rensselaer Polytechnic Institute (RPI), traveled to the Utica, NY for the Utica College Pioneer Open. Brandon raced the 3K in 9:01.40 (life-time PR!) and finished 12th/39 overall. Another RPI mob scene with 14 teammates in the race and quite a few finishing before Brandon. Ya think these guys focus on distance?! Details at: RPI Athletics.

-- On February 8, 2020, Alum Brandon Marks '18 of Rensselaer Polytechnic Institute (RPI), returned to Utica, NY for the Utica College Blue and Orange Invitational where he competed in the 3K, finishing 7th/39 overall in a PR 8:54.75. Details at: Sidearm.

-- On February 15, 2020, Alum Mike Zurzolo '17 of TCNJ, traveled to Boston University for the David Hemery Valentine Invitational. Mike competed in the 3K and clocked a huge PR of 8:31.87! Former BCT Sport Reporter Reuben Frank, now with NBC Sports Philadelphia, and writing in his South Jersey Track Coaches Association's blog, From the Backstretch, said that Mike had an outstanding race! His article is also available on our server at Cherokee grad Mike Zurzolo runs TCNJ's fastest 3,000 in 13 years at Boston University!!!!!. Details at: Lancer Timing.

-- On February 15, 2020, Alum Brandon Marks '18 of Rensselaer Polytechnic Institute (RPI), is listed on the indexed results for the David Hemery Valentine Invitational at Boston University. The index reports that he completed the 5K in a PR 15:39.41 but the race results report skips five finishers between 15:38.52 and 15:46.36. Hurumph! See Lancer Timing.