All Cross Country teams are in a state of flux, some with no Fall programs, some with modified programs but all "waiting for the next shoe to drop!" For those who are training and occasionally racing, testing goes on and everyone hopes that no positive results turn-up. Early on, however, TCNJ canceled their Fall sports and left three of our Alums wondering what's next; and The Big Sky Conference with NAU postponed all Fall sports until the Spring! Really?! The rest seem to be going day-by-day!

-- On September 12, 2020, Alum Ethan Wechsler '19 of Syracuse University, competed in the Syracuse - USMA Dual Meet near West Point at the "Twin Ponds on the Farm" facility in Montgomery, NY. Ethan finished 15th overall while clocking a decent 23:38.2 (5:05 pace) on the 7.5K course! Ethan told Coach Shaklee that he was the second true Freshman (discounting "redshirt Freshmen") and that his training is coming along well! He's also fairly confident about the "very low" number of positive virus cases on campus, his three-times-a-week virus testing, and the overall cautious attitude on campus. Race details at: Direct Athletics. Pictures by John Nepolitan, Dyestat. 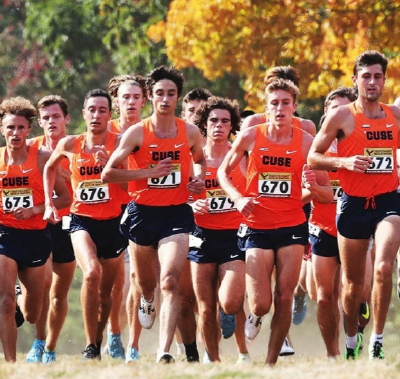 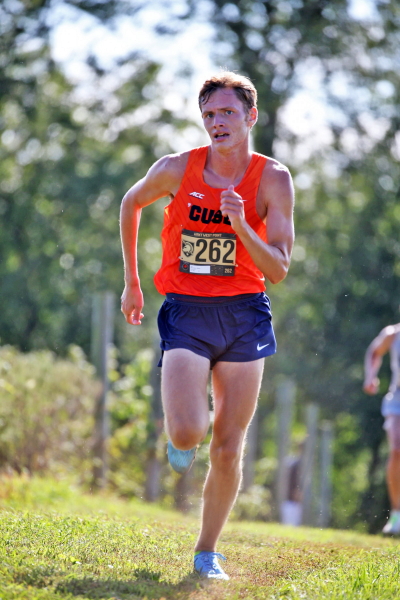 -- On September 25, 2020, Alum Ethan Wechsler '19 of Syracuse University, competed in the virus-depleated Coast-to-Coast Battle in Beantown at the Coogan Cross Country Course in Attleboro, MA. With Syracuse racing against only USMA and Boston College, the team took 1st. Ethan finished the 8K course in 26.13.6 (5:17 pace) taking 20th overall/13th among Syracuse runners. For the record, this was Syracuse's 4th consecutive win at Beantown. Also, in previous years without the virus threat, more than 20 teams competed in the event. Results at: TFRRS.

-- On October 17, 2020, Alum Jack Shea '17 of Northern Arizona University, traveled to Stillwater, Oklahoma for the Oklahoma State Invitational, the first major meet allowed by their conference this Cross Country season! And "major" it was, featuring among the eight teams competing last year's National Champions, BYU, Jack's NAU, and the host team, Oklahoma State, three of the best in the country! NAU won the 8K race by 6 places over OSU and 23 over BYU! Jack had a rough outing, finishing 60th/96 overall in 26:00.9 (5:14 pace). Picture provided by NAU: anyone recognize Jack in the group?! Details at: TFRRS. 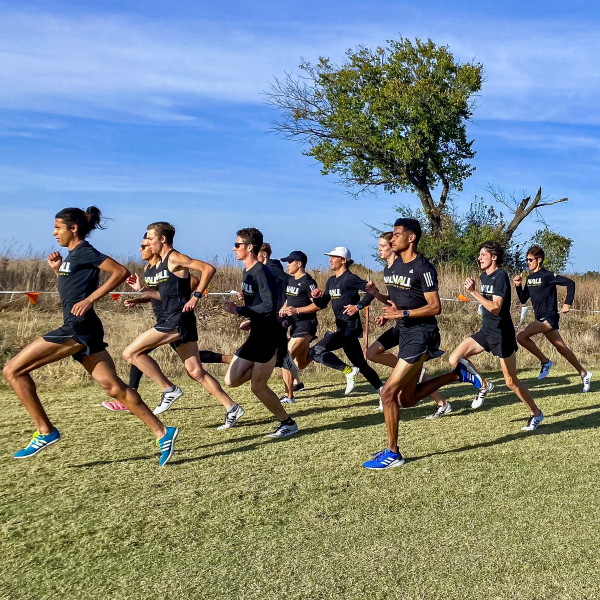 Just as the nation was wrecked by the Coronavirus, Cross Country, 2020 was wrecked, and no one really knows what will happen during the Indoor season. Here in early December, some programs are trying to continue but most are likely to wait until the vaccine is widely available. That should be by the Spring season. Despite the incredible negativity sweeping the nation, largely fostered by self-seeking and perverse politicians, try to stay positive!

[-- On November 19, 2020, Alum Tray Cabbagestalk '19 of the Indiana Institute of Technology, was scheduled to compete at the Turnstone Classic in Fort Wayne but he was a DNS in the Triple Jump. (Probably thought he was going to have to race on the Turnstone Center's 230m flat track and he hid!) Meet details at: TFRRS.]

-- On January 15, 2021, after about 14 months of no competition, Alum Ethan Wechsler '19 of Syracuse University, competed in the Virginia Tech Invitational in Blacksburg, VA. Ethan raced the 3K and finished 7th overall -- but 2nd among college competitors -- in 8:33.54 (4:36 pace)! Also, he was 1st among Syracuse's five athletes in the race! GO ETHAN! Reuben Frank of NBC Sports and featured web writer for the South Jersey Track Coaches Association, reported on Ethan's race at SJTCA Web and his comments were saved on our server at Wechsler at VT. Official results at: TFRRS.

-- On January 16, 2021, again after a long hiatus, Alum Lucciano Pizarro '19 of Penn State University, competed in the Nittany Lion Opener at the Ashenfelter Track facility in University Park, PA. Essentially, the meet was a three-team event -- Penn State, Maryland and Rutgers -- and only PSU and Rutgers entered Pizarro's event, the Shot Put. Luch took 4th/7 overall, and 4th in the Penn State line-up, with a throw of 15.32m (50' 3.25")! Don't forget: the high school Shot is 12 lbs; the college Shot is 16 lbs! A HUGE difference! GO LUCH! Reuben Frank of NBC Sports and the SJTCA, reported on Luch's throw at SJTCA Web and his comments were saved on our server at Pizarro throws Shot PR. Details at: TFRRS

-- On January 23, 2021, Alum Lucciano Pizarro '19 of Penn State University, stayed at home for the Penn State Invite, a four-team competition involving Ohio State, Maryland, Rutgers and Penn State. Luch and his team threw the Shot against only Rutgers and Maryland, and he improved considerably over last week! In the 9-man competition, Luch finished 4th (behind two Maryland throwers and one from PSU) while throwing 16.42m (53' 10.50")! Another nice college PR! The picture is from the PSU website. Reuben Frank reported on Luch's throw at SJTCA Web and his comments were saved on our server at Pizarro tosses a 3-foot PR. Details at: PSU Sports. 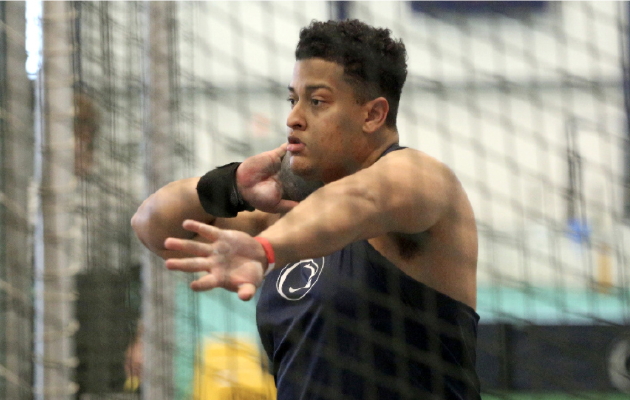 -- On January 29, 2021, Alum Tray Cabbagestalk '19 of the Indiana Institute of Technology, competed at the Warrior Invitational at the Turnstone Center in Fort Wayne, IN. Tray entered the Triple Jump where he finished 5th/14 clearing an indoor PR of 13.75m (45' 1.5"). Meet details at: TFRRS.

-- On February 1, 2021, Alum Jack Shea '17 of Northern Arizona University, traveled to Las Vegas, Nevada for an unusual February Cross Country meet, the Silver State Collegiate Challenge. (Adjusting because of the Coronavirus, the NCAA is allowing both XC and Track to compete at this time!) The meet was hosted by USA Track and Field at the Craig Ranch Regional Park and had some serious competition, including BYU, the eventual winner of the meet! NAU raced in two 8K events and Jack was in the second (Race 5) where he finished a disappointing 13th/17 overall in 25.52.5 (5:12 pace). Details at: FloTrack. No meet pics available but we like this picture on the NAU website! 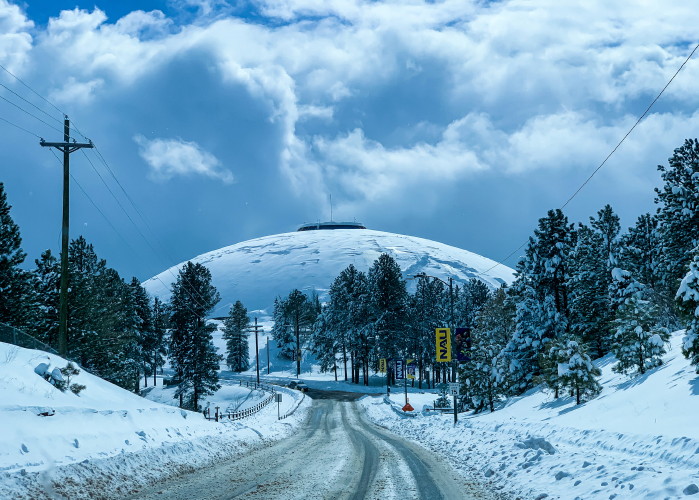 -- On February 5, 2021, Alum Ethan Wechsler '19 of Syracuse University, returned to Blacksburg, Va for the Doc Hale Virginia Tech Elite. Ethan raced the 3K again and posted another PR of 8:28.32 (4:33 pace), finishing 6th/13 overall and 2nd among the four Syracuse runners in the race! Cinnaminson graduate and now a Junior at Duke, Mike Ungvarsky, was scheduled to compete but he is listed as DNS. Too bad! Details at: Flash Results.

-- On February 19, 2021, Alum Jack Shea '17 of Northern Arizona University, was entered in the 8K race at the Craig Ranch Regional Park in Las Vegas, NV but he DNS. NAU entered their big guns and won the 1st race, taking the first 5 out of 8 places and beating 2nd place Stanford by 28 points! Race results at: TFRRS. 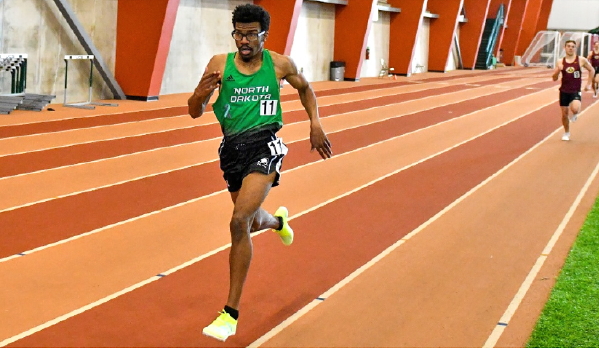 -- On March 20, 2021, Alums Mike Iannotta '17 and Chase Miller '19 of The College of New Jersey, traveled to Stockton University for their first Track Meet in over a year and ended up competing in a Cross Country race, the New Jersey Athletic Conference Championships! Mike finished 8th on his team/13th overall in 27.35.6. Incredibly, Chase took 1st on the team/3rd overall in the 8K event, clocking 25.58.8 (pace: 5:14)! In addition, his team beat 2nd place Stockton by ONE POINT (29 - 30) to clinch the 25th win for the program in the last 27 seasons! The competition picture of Chase below came from the parent grapevine! The team picture from TCNJ shows Mike and Chase, with Chase cleverly featured in the front . . . he's the trend-setting guy with the long hair! GO MIKE! GO CHASE! . . . Reuben Frank reported on Chase's race at SJTCA Web and his comments were saved on our server at Cherokee's Chase Miller, Shawnee's Jack Innis Lead TCNJ to NJAC Title!. Details at: TCNJ. 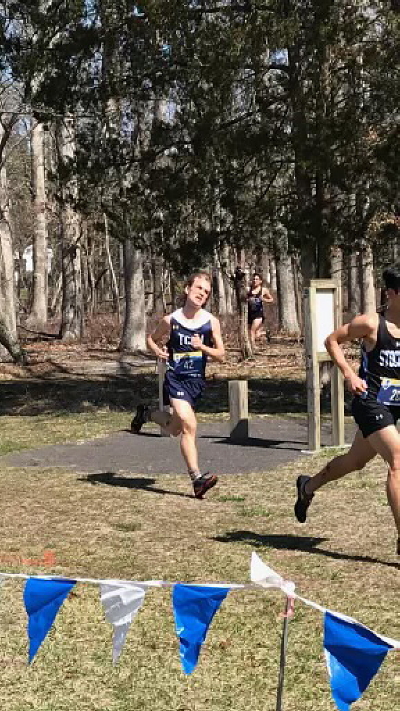 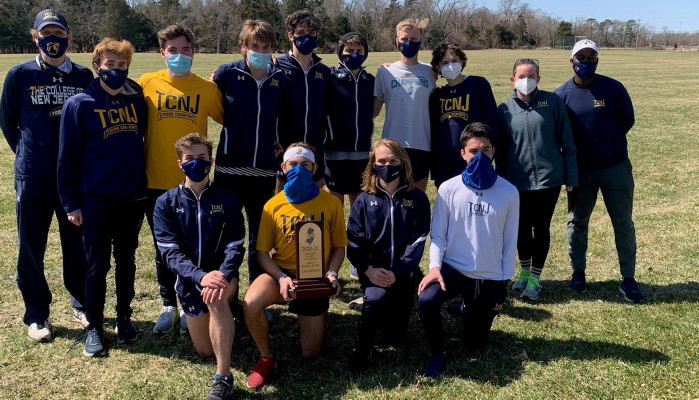 -- On March 20, 2021, Alum Chase Miller '19 of The College of New Jersey, received special honors from the New Jersey Athletic Conference (NJAC)! In addition to being named to the "First Team All-Conference," Chase was singled-out as the "Rookie of the Year" by the Conference! (We're pretty sure this award included a gold Rolex watch but let's not start any rumors before it's verified . . ..) GO CHASE! Details at: NJAC Sports.

-- On March 20, 2021, Alums Mike Gavio '19 and Matt Campbell '19 of Bloomsburg University, traveled to Lock Haven, PA for the twelve-team Pennsylvania State Athletic Conference (PSAC) Men's Cross Country Championship. Mike finished the 5K race 3rd on his team/54th overall in 16.44.1 (5:23 pace) while Matt finished 6th on his team/89th overall in 17:40.0 (5:41 pace). The team finished 10th of the 12 teams in the race. The pictures below were supplied by Slippery Rock University at: Slippery Rock Pics. Details at: BU Huskies.

-- On March 20, 2021, Alum Jack Shea '17 of Northern Arizona University, traveled to the University of Arizona in Tucson for the 7-team Willie Williams Classic/Dave Murray Distance Carnival. Jack raced the 1500m in a PR of 3:58.19, winning his heat while finishing 9th/26 overall. Details at:TFRRS.

-- On April 2, 2021, Alum Tyler Jackson '20 of The University of North Dakota, traveled about an hour south to North Dakota State University for the NDSU Spring Classic. Tyler competed in the 800m Dash, finishing 10th/11 overall in 2:03.32, and he was the 3rd leg in the 4 X 400m Relay that finished in 3rd/3 overall in 3:27.16. I know, you're thinking it was probably snowing, windy and 30 degrees but the weather channel says it was in the 70's! That's warmer than it was in NJ! Pictures from UND website. (Click on thumbnails.) Details at: Wayzata Timing. 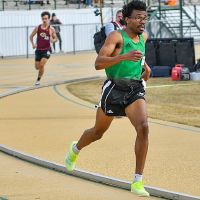 -- On April 3, 2021, Alum Jack Shea '17 of Northern Arizona University, traveled to Grand Canyon University in Phoenix for the Antelope Invitational. Jack raced the 1500m, finishing 9th/22 overall in another PR of 3:51.95! Details at: Wing Foot.

-- On April 10, 2021, Alum Lucciano Pizarro '19 of Penn State University,returned to his home state for the Rutgers BIG Tri-Meet with Penn State, Rutgers and Maryland in competition. Luch won the Shot with a put of 17.22m (56' 6"), a slight improvement over his PR! Details at: TFRRS.