The seasons follow in chronological order but you may click on one of the following to move immediately to that season:

-- On September 13th, former Cherokee star, Keith Krieger ('03), now a freshman at Duke, began his collegiate career in outstanding fashion. In the Lou Onesty Invitational at the University of Virginia, Keith ran 25:13 on the muddy, hilly 8k cross country course. Keith placed 12th overall and 4th for the Blue Devils as they upset William and Mary, the 15th ranked team in the nation. For more information on the meet go to: Go Duke

-- On the weekend of September 27th, the 2003 Cherokee team will travel to the Great American Cross Country Festival in Raleigh, NC to participate in the Invitational Boys Seeded Race. While there, they expect to watch several former members of the team, including Marc Pelerin ('02) of Villanova and Keith Krieger ('03) of Duke, compete on their college teams. For more information go to: Great American Cross Country Festival

-- Former Group IV Cross Country State Champion and Cherokee graduate, Joe Halin ('00), is off and running again this season. After taking a year off from the Appalachian State team, Joe is back. On September 5th, he placed 4th (26:10) overall and 3rd for ASU in the Covered Bridge Open at Appalachian State; and on September 20th, he placed 6th (25:47) in the Wintrop Invitational at Rock Hill, SC (2nd for ASU) as his team finished a close 2nd to High Point University. For more information go to: Go ASU!

-- Battle of the Alums, I. . . . On September 26th, the team witnessed the first head-to-head battle between former Cherokee teammates Keith Krieger ('03) and Marc Pelerin ('02) at the Great American Cross Country Festival in Raleigh, NC, and this time, Krieger emerged the winner. Keith finished the 8k course in 44th (2nd on the Duke team) at 26:45.5; while Marc finished in 73rd (6th on the Villanova team) at 27:24.5. Further results can be had at: Great American Results 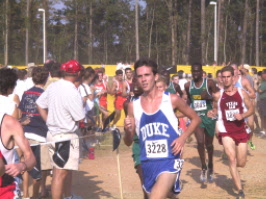 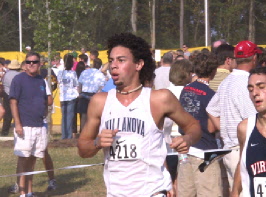 -- Cherokee has a large representation on the Cross Country team at Stockton College of New Jersey. Sophomore Matt Mueller ('02) is already a team leader and his contributions are touted in an article on the school's website. Sophomores Dan Schules ('02) and Dan Shektman ('03), and Freshman Jim Dolan ('03) are also members of the Ospreys.

Picture of Matt Mueller from the Stockton Athletic Department:

-- On October 4, 2003, four of Cherokee's distance Alums were involved in Cross Country activities:

-- On October 11th, Alum Mike Caputi ('00), running for the University of Maryland-Baltimore County's Cross Country "B" team in the Mid-Atlantic Classic at Goucher College, took 7th place overall and 3rd on his team to help "The Retrievers" to a 1st place victory. UMBC placed four runners in the top ten, scoring 35 points, three more than runner-up Rowan University. Mike covered the 8K course in 28:45. Results at: UMBC

-- On October 18th, 2003, three of Cherokee's Alums were involved in Cross Country activities:

-- On Friday, October 31st, Villanova was one of 14 teams competing in the Big East Cross Country Championships at Van Cortlandt Park in NYC. They took third place with 67 points behind Georgetown (29 pts) and Notre Dame (66 pts). Villanova Senior Jon Fasulo took first place in 24:25, while Alum Marc Pelerin took 33rd overall and 6th on the team in 26:09. In passing, Brian Dalpiaz of Georgetown finished in 31st place in 26:06. Complete results at: Villanova Cross Country 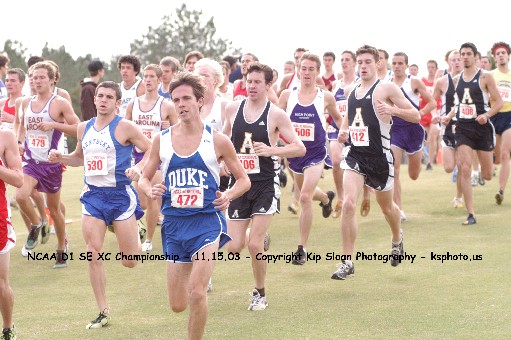 -- On November 22nd, Cherokee's Varsity competed in the State Meet of Champions and, while there, the team spotted a Kevin Hurley ('01) look-alike, only this guy, correctly dressed in a UMBC sweatshirt, was far more unkempt than the natty Kevin of old. Decide for yourselves . . .! 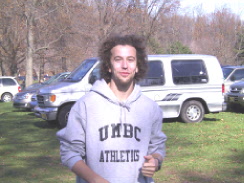 -- On November 24th, the 2003 NCAA Division I National Cross Country Championships were held -- apparently to insure that no one, spectators or participants, actually enjoyed the experience -- at the University of Northern Iowa. For those of you who are a little weak on geography, the university is in Cedar Falls, about 100 miles south of the Minnosota border. In November, it can be an unpleasant place for a cross country race. Indeed, at race time, the wind gusted to 35 mph and the temperature held steady at a brisk 20 degrees! And next year, we may assume, the race will be held at the North Pole!

Despite all of that, Alum Marc Pelerin finished 6th on the Villanova team (145th overall out of 254 runners) in a respectable time of 31:31.5. Villanova finished 11th out of 31 teams. Full results at: NCAA Nationals. Click on the thumbnails for larger pictures from Trackshark showing Marc in the race:

-- Congratulations to Alum Keith Krieger ('03) who was named the Cross Country "Freshman of the Year" by the coaches at Duke University!

-- On January 18, 2004, Alums Mike Caputi ('00) and Kevin Hurley ('01), running for the University of Maryland at Baltimore, participated in the Great Dane Classic at the New York Armory. Mike ran 2:00.38 in the 800M finishing 9th, and Kevin ran 8:53.00 in the 3K finishing 8th. Also running in the 3K for UMBC was former elite South Jersey runner, Adam Driscoll ('00) who finished 2nd in 8:39.92. UMBC finished second to Northeastern University in the ten-school event. Complete results at: Armory Track

-- On January 24, 2004, a busy day for our Alums, three graduates were involved in separate meets around the country.

-- On February 8, 2004, Alum Keith Krieger ('03) placed 23rd at the USATF Junior National Cross Country Championships in Indianapolis, Indiana. He competed against 45 others for a chance to represent the United States at the Junior World Cross Cross Country Championships in Brussels, Belgium. The course was snow-covered, and the temperature at race time was in the 20s, with winds making it feel like 10 degrees! Keith ran 25:46 in the 8K race against some of the top young (the race is limited to athletes 19 and under) runners in the country. Full results at: USATF

-- The extended weekend between February 20th and February 22nd, 2004, saw six of Cherokee's Alums in action :

Click on these thumbnails for larger versions from Trackshark:

-- On February 28, 2004, Alum Joe Halin ('00) of Appalachian State University competed in the Southern Conference Indoor Track and Field Championships at East Tennessee State University. Joe scored for his team, taking 4th in the 3K in a PR time of 8:31.76! Full results at: SoCon Results

-- On March 13, 2004, Coach Shaklee participated in the St. Baldrick's Day head-shaving event at The Plough and Stars in Philadelphia to raise money for the National Childhood Cancer Foundation. Alumni witnesses included Tim Haggerty ('96), Matt Jacobs ('96) and Shawnee Alum Jason Douglas ('92). His efforts resulted in a $3,000 contribution to the foundation! For more information, see: St. Baldrick's 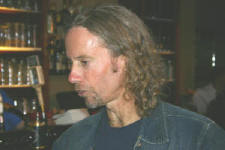 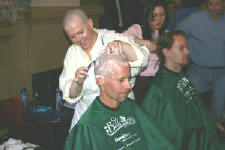 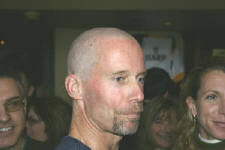 -- On May 1st, a few of our Alums were in competition:

-- On May 6th, Alum Joe Halin ('00) of Appalachian State University, looking healthy from the rigors of the Spring Track season, stopped at Eastern High School's track to encourage the troops at the Cherokee vs Eastern dual meet. Joe was home for a long weekend before returning to ASU for finals. This picture shows Joe squinting into the late afternoon sun. Anyone recognize the person in the background?! 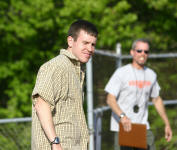 -- On May 8th, Alum Keith Krieger ('03) of Duke University competed in the James Madison Invitational at Harrisonburg, Va. Sharpening for the 10K in the upcoming ECAC/IC4A Championships, Keith ran the 3K in 8:45.49, finishing 6th in the race. Complete results at: JMU Sports

-- On May 15th, Alums Keith Krieger ('03) of Duke University and Marc Pelerin ('02) of Villanova University competed in the ECAC and IC4A Championships at Yale University. Keith took 2nd in the 10K, running an outstanding 30:13.93, another PR in an exceptional Freshman season! Marc did well too, running the 5K in 14:26.44 and taking 9th in the race. Full results are available at: ECAC-IC4A Results

-- On May 27, 2004, Alum Dave Sitzer of Oklahoma Baptist University competed in the NAIA (National Association of Intercollegiate Athletics) Track and Field Championships at Louisville, Ky. Nursing an injury for weeks, Dave and his coach decided that he could run one good race. Entered in the 4 X 800 Relay, Dave led-off in an unofficial 1:51.3 and helped his team take second in an outstanding 7:26.98! Full results at: NAIA Championships

-- Congratulations to Alum Keith Krieger ('03) who was named Track and Field "Freshman of the Year" by the coaches at Duke University! This is the second time Keith received this recognition, having been named after the Cross Country season as well.

-- On June 12, 2004, Alum Marc Pelerin ('02) of Villanova University competed in the New Jersey International Track and Field Meet at Colts Neck H.S. In a torrid finish, Marc placed third in the mile (PR of 4:08.58), only 4/10ths of a second behind the first place finisher. Full results at: NJ International

-- On June 26, 2004, Alum Keith Krieger ('03), running unattached, competed in the USA Junior Outdoor Track and Field Championships at Texas A & M in College Station, Texas. Running in humid weather similar to what we have here in New Jersey, Keith took 5th in the 10K at 32:17.26 and was named a Verizon US Junior All-American. Full results at: USA Jr. Nats


Return to the Main Page for Cherokee Cross Country & Track and Field.