"Join your fellow Cherokee Cross Country and Track and Field Alumni in the launch of a new Alumni Association! While in its early stages, the aims of this association include supporting the current men's and women's teams through financial support and scholarships, increasing alumni engagement and presence at meets, and creating opportunities for mentorship of current and former student athletes. Overall, we hope to build a robust community of XC/TF alumni of these storied programs from the 70's to the present. If you'd like to become a member of the association or just be kept in the loop, please fill out the form below to receive future communications regarding alumni association events and initiatives. And do not hesitate to share this link with any XC/TF alumni friends who you think may be interested as well! We look forward to connecting and reconnecting with you all at future events!" Lisa Burkholder

Looking forward to hearing from you!

Last Fall, the Coronavirus seemed to wane and everyone looked forward to a "normal" Cross Country season. Well, that wasn't exactly right but many were able to compete in the sport with only minor disruptions. This year, things seem even better and everyone is looking forward to a great year of Cross Country and Track and Field! GO CHEROKEE ALUMS!


-- Last year, the traditional Marlton Fourth of July 5K was canceled for a second year and a number of our Alums went over to Haddon Heights for their traditional holiday race, the Haddon Heights FireCracker 5K! Alum Jack Shea '17, a graduate of Northern Arizona University, won the race in 15:09 (4:54 pace)! Alum Ethan Wechsler '19 of Syracuse University, took 3rd in the race in 15:32 (5:01 pace), and "ancient" Alum Marc Pelerin '02, teacher at Cinnaminson Middle School took an impressive 8th overall in 17:32 (5:40 pace)! This year, Jack raced at Heights again (they pay $150 to the winner!) and killed his own time from last year, taking 1st in 14:53 (4:48 pace)! No other Cherokee Alums ran the race. Details and video at: Run Sign-up. The best part about this screenshot is it shows the video for the 5K ran 47.09 minutes! 15 minute miles?! Did our photographer "run" the race . . . Coach Shaklee?! 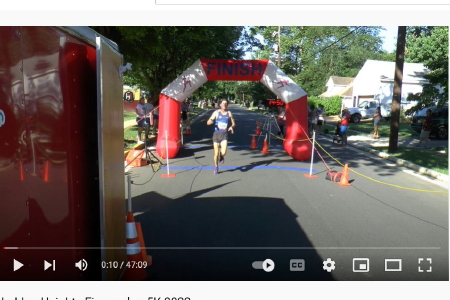 - On July 19th, 2022, Alum Jack Shea '17, graduate of NAU, joined the team at a tough practice on and off campus. Jack ran with the top three guys on the team -- Conor, Nick and Patrick -- and they all worked up a decent sweat on this hot day! BTW, Jack is going to RunningWorks this year as both a counselor and Q and A speaker! 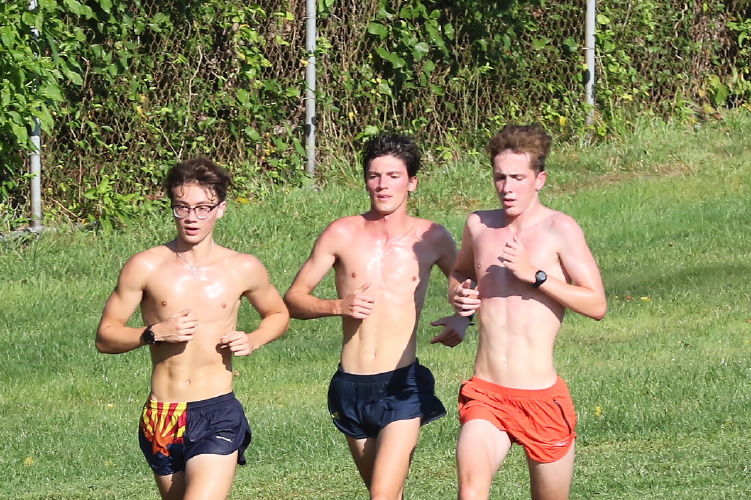 -- On July 31st, 2022, Alum Jack Shea '17, graduate of NAU, continued his acting/modeling career -- remember his remarkable performance in the award-winning Chanel Cosmetics commercial? -- when he appeared in his official 2022 RunningWorks uniform at the Haddonfield Running Company! Stay tuned, his next contract is with Swifter Dusters! 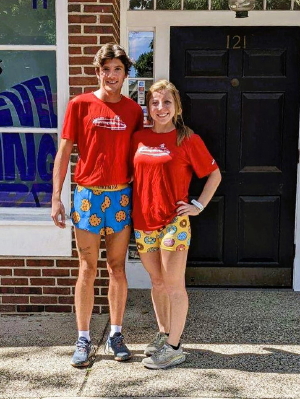 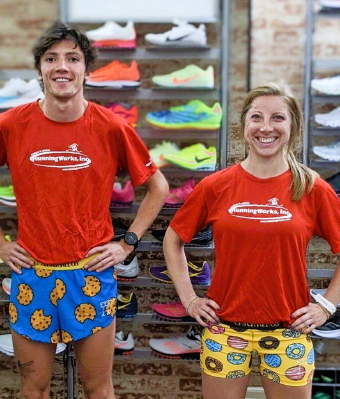 -- Between August 7th-20th, 2022, a number of Alums kept things going at the 23rd Annual RunningWorks Cross Country Camp at Canadensis, PA! Two of the three Directors, of course, Kevin Cuneo '04 and Kevin Schickling '08, and four other Alums acting as Counselors: Jack Shea '17; Mike Zurzolo '17; Chase Miller '19; and Ethan Wechsler '19. They did a great job with the campers and we understand the campers thought the same!

-- On September 2nd, 2022, Alum Brandon Marks '18 of Rensselaer Polytechnic Institute, was named a Captain of his team with the following notation: "Returning for his fifth year as an architecture major and second as a captain, Marks (Marlton, NJ / Cherokee) has also run in 12 events with a personal-best 8k time of 25:48.9. He has competed in two Liberty League Championship meets, including a 27:17.2 in 2021 and a 27:06.4 in 2019." Two years as Captain? Shouldn't he be a Major by now?

-- On September 3rd, 2022, Alum Ethan Wechsler '20 of Syracuse University, opened his season at the Harry Lang Invitational, a 6K race at Colgate University in Hamilton NY. Ethan took 5th/55 overall and clocked 20.21 (5:07 pace) in the 5-team race. Race details at: TFRRS. For years, Ethan trained under the catchphrase: "Move to the sound of the clicks" and he frequently got the best picture of the day! Now, however, with the new "mirrorless" cameras, there are no clicks and he appears lost in this new generation of technology! Reuben Frank of Comcast and NBC Sports, recognized Ethan's race in his SJTCA Blog: SJ Track Blog. 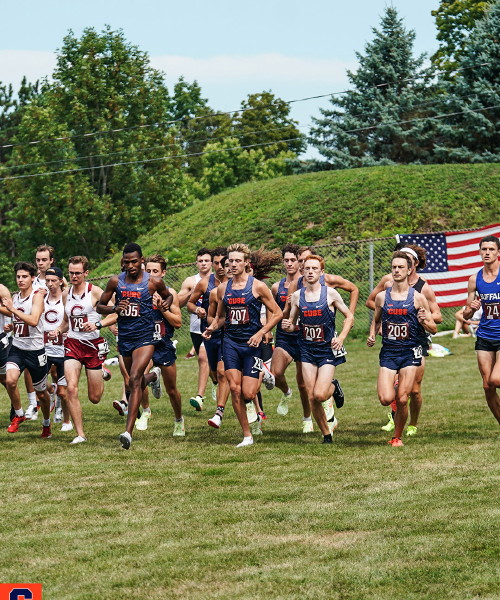 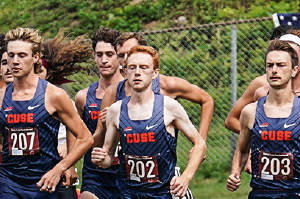 -- On September 3rd, 2022, Alums Chase Miller '20 and Matt Smith '18 of TCNJ, opened their season at home in the 6K Blue and Gold Invitational, basically a team time-trial that included powerhouse New Jersey City University. TCNJ took the first 15 places with Chase finishing in 7th/21 overall while clocking 20:11 (pace 5:25); and Matt finishing in 9th while clocking 20:25 (pace 05:29). Details at: TFRRS.

-- On September 9th, 2022, Alum Jack Shea '17, formerly of NAU and now in graduate school at St. Joseph's University, Philadelphia, opened his season and began his new life at the Penn State University Spiked Shoe Invitational on Penn State's Golf Course at University Park, PA. Jack finished the 5.2 mile course in 26.05 (5:01 pace), crossing the line 22nd/92 overall and 1st for St. Joe's. When your head stops spinning -- wonder if he was still wearing an NAU uniform? -- check the details at: TFRRS.

__ On September 10, 2022, a number of Cherokee Alums, including several State Champions, stopped by the Cherokee Challenge to show their colors and encourage the further growth of the XC and T & F Alumni Association! 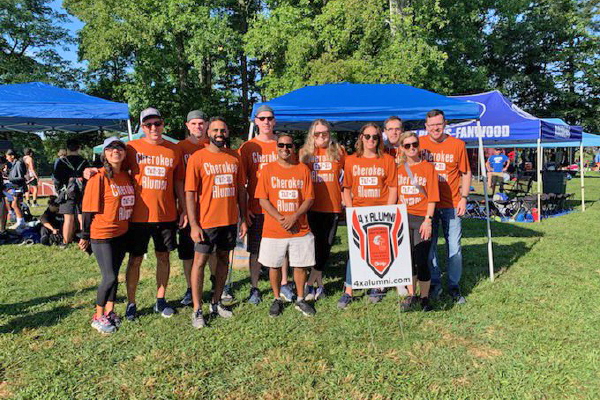 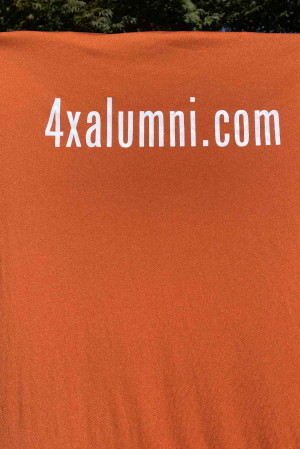 -- On September 10th, 2022, Alum Brandon Marks '18 of Rensselaer Polytechnic Institute, competed in the Siena XC Invitational at The Crossings in Latham, NY. His team won the 14-team contest but Brandon had a exceptionally "off" race! He clocked 27:03.8 (5:27 pace) in the 8K event, finishing 82nd/191 overall! Picture from RPI website: Brandon looks good there! Details at: RPI Athletics. 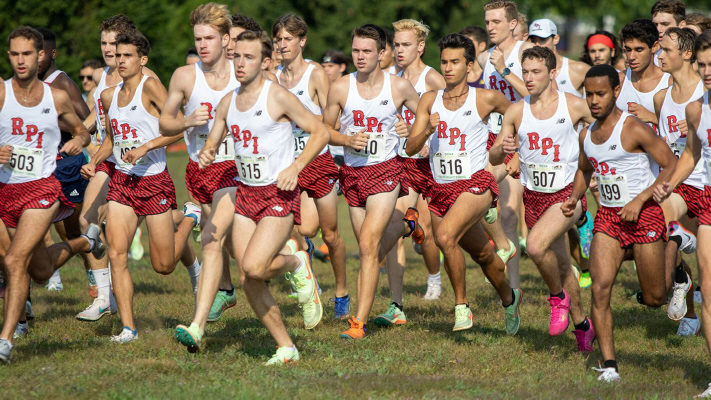 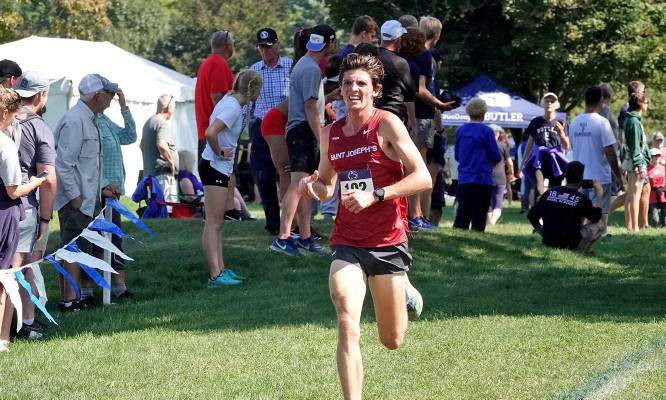 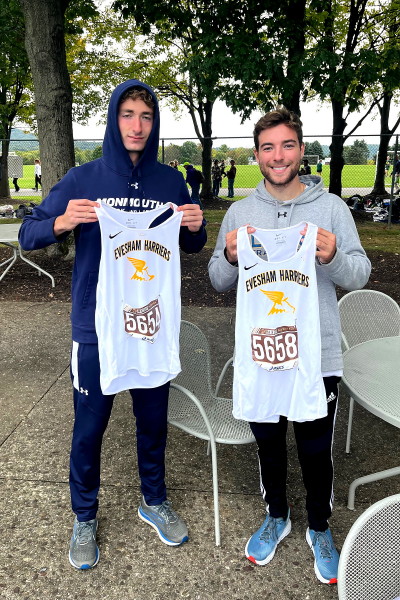 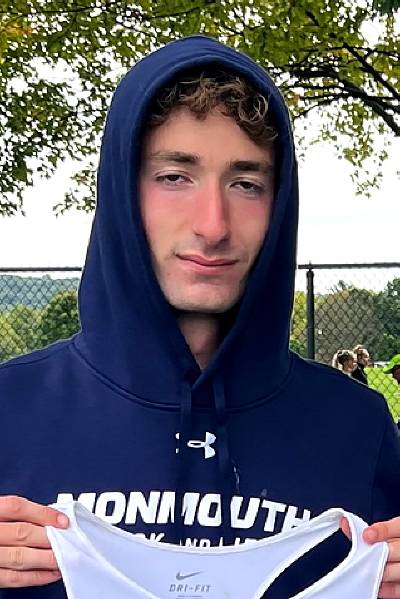 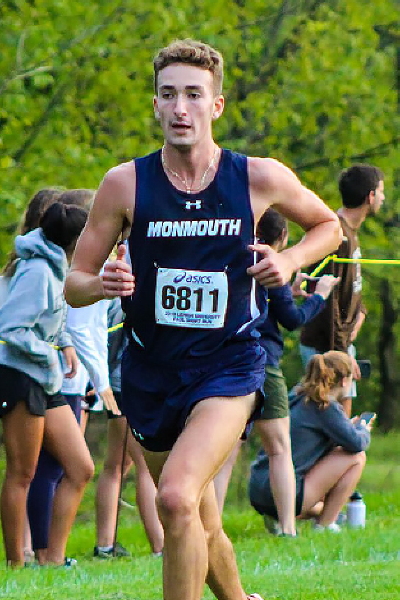 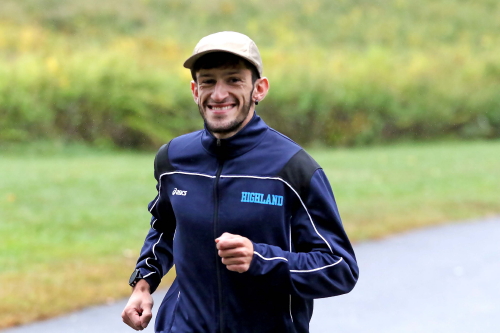 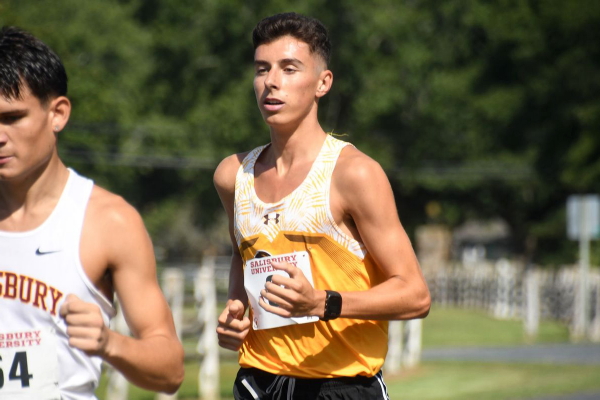 -- On October 8th, 2022, Alum Matt Campbell '19 of Bloomsburg University, traveled to Mansfield University for the Ed Winrow Memorial Invitational where he raced the 8K in 28.49 (5:48 pace) and finished 58th/96 overall. Details at: BU Huskies. 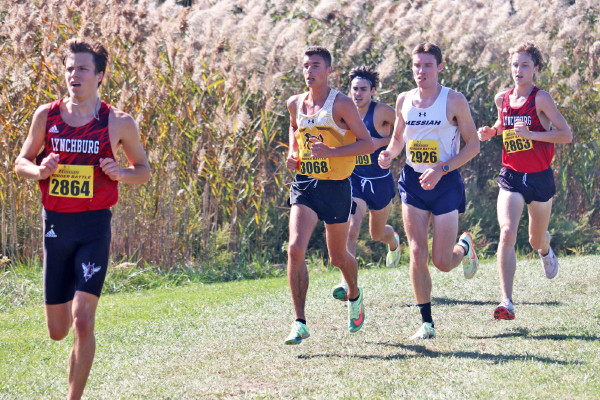 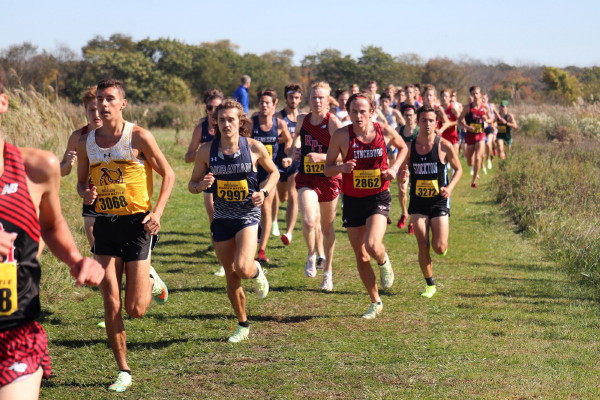 -- On November 12th, Alum Justin Kelly '18 of Rowan University, traveled to DeSales University in Center Valley, PA for the 2022 NCAA Metro Region Championships. Justin led his team with a 22nd placing in the 8K race, clocking 26:38 (pace: 5:22). His team finished 5th overall, just behind TCNJ in 4th. Details at: DeSales.

-- On November 18th, 2022, Alum Chase Miller '20 of TCNJ had a prominent position on the recently-discovered XC team's picture! The long-haired, blond, and goateed (perhaps "lionlike"?) Miller sat directly below the school's statue of their mighty mascot, Roscoe the Lion! Two noble characters! Seated down the line from Chase is the equally noble Alum Matt Smith '18! 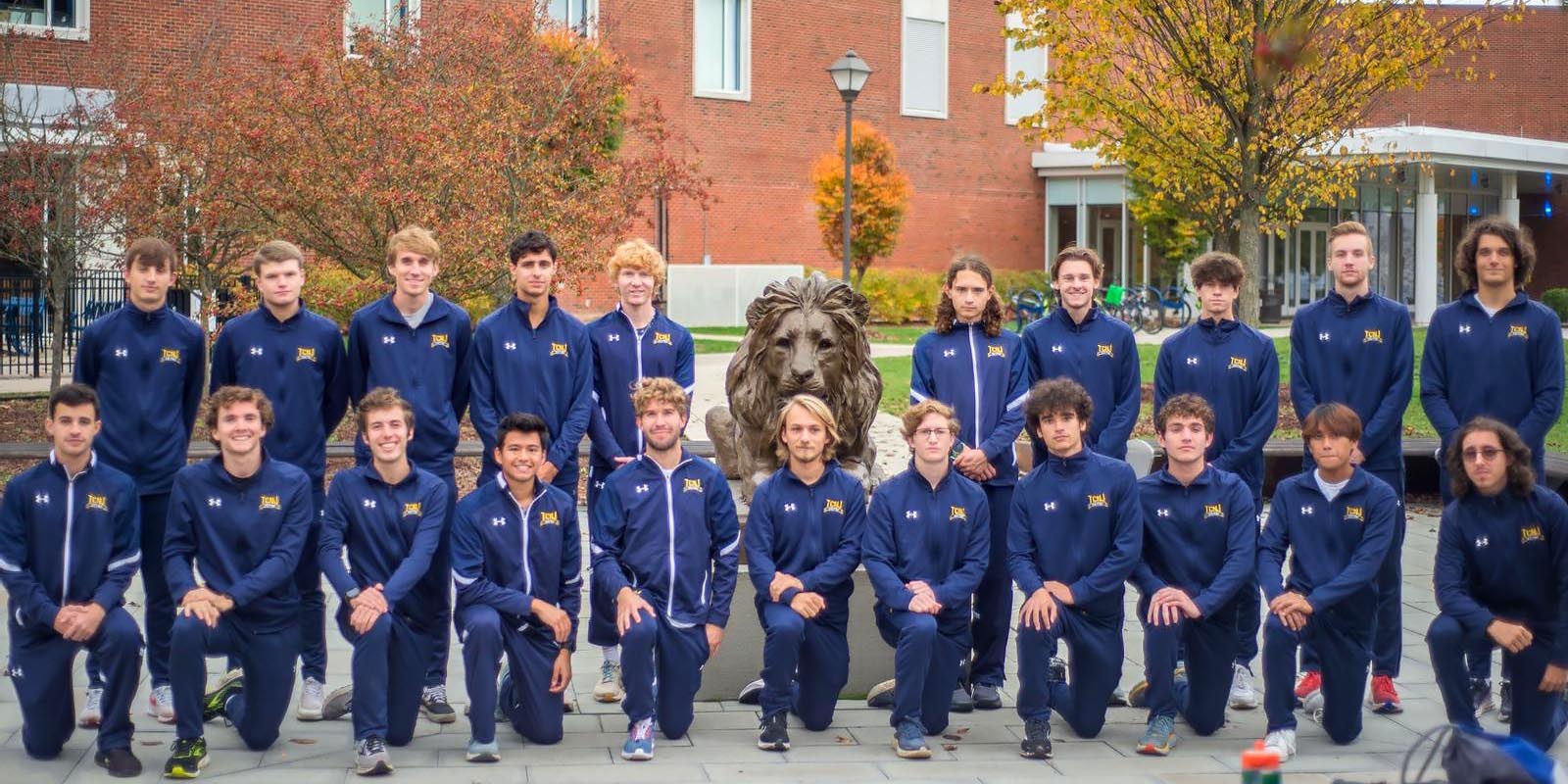 -- On November 20th, 2022, Alum Mike Iannotta '17 a graduate of TCNJ, competed in his first Philadelphia Marathon on one, nasty day in Philadelphia! Mike enjoyed temperatures in the low 30's, which is good for a marathon, but that was accompanied by winds in the 20's! Ah, nothing like a brisk run along the Schuylkill River! Mike finished the race in 59th place (6th in his age group/8394 finishers) in 2:35:27 (pace, 5:56)! Details at: Philadelphia Marathon.