The Hall of Fame Classic

On October 15th, 2005, the Cherokee Varsity squad continued its training at Holmdel, the state championship course, while several of the Freshmen and JV runners competed in the inaugural Hall of Fame Meet at Gloucester County College. Running on a new course that seemed short by about 2/10ths of a mile, the Freshmen scored well: Marc Saccomanno finished 3rd; followed by Rob Roselli, 5th; Sean Hartnett, 8th; and Graham Davis, 18th.

The JV runners also ran on a new course but, unlike the Freshmen, most thought it was too long! Ryan Lutz did well in the Sophomore race, finishing in 4th, closely followed by Liam Eells and Geoff Schellack. And in the Senior race, Ryan Elliott finished in 8th place but missed his goal of running a PR. That will have to wait until the Haddonfield Invitational!

The following pictures are from the meet:

On October 6th, 2005, Coach Shaklee took a "busman's holiday" at the 5K Run for Heroes, a roadrace in Springfield, PA. The coach finished the difficult course (some say it's comparable to the cross country course at Holmdel!) in 17:05.6 -- about 30 seconds faster than his time last year. He took 5th overall (292 finishers) and the 2nd place award in his age group! His wife, Cricket Batz Shaklee also competed, taking 20th overall and 1st in her age group!

On October 21st, 2005, Cherokee traveled to Mill Creek Park in Willingboro for the Burlington County Open and made impressive showings in both the Varsity and Open competition! In the Varsity race, the Cherokee team took 1st place -- its fifth Burlington County Championship in a row, and ninth championship in the last eleven years! Behind the front-running of Greg Bredeck (2nd in 16:16) and Alex Yersak (4th in 16:33), and closely followed by Rich Nelson (7th in 16:47), Will Andes (9th in 16:56), Kevin Schickling (16th in 17:18), Vin Marziano (18th in 17:21), and Mike Medvec in 17:50), the team scored 38 points, with well-respected Moorestown coming in second with 91 points.

The coaches selected Steve McCarroll as the "Runner of the Meet" to highlight both his victory in the Sophomore Race and the 1:47 he dropped from last year's time! GO STEVE! 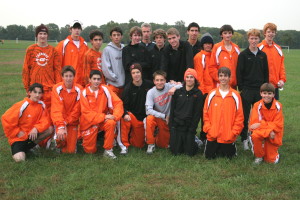 Alternate Training Can Be Fun!

Senior Matt Applegate thought the team might be inspired to reach even higher goals if they could see Team Captain Vin Marziano happily doing one of his pool exercises. 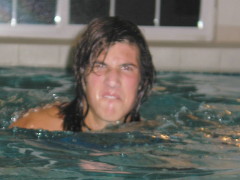 On October 24th, the entire Cherokee team showed up for the SJ Frosh-Soph Meet at Gloucester County College: the Freshmen and Sophomores to compete, the Varsity and JV to train and to cheer! The weather, however, lent itself to neither as cold winds and dark storm clouds moved in and rain threatened. Still, the meet and the training went on, and the only serious casualty was the quality of the photographs!

In the Freshman race, Marc Saccomanno took 6th in an excellent time of 13:58. He was followed by Rob Roselli in 17th and Sean Hartnett in 37th. Graham Davis finished in 72nd but dropped 37 seconds from his previous time on the course!

Coach Shaklee selected Geoff Schellack as the "Runner of the Meet" to recognize the significant improvement he made since his last time on the course! GO GEOFF!

Here are some pictures from the meet, such as they are:

On October 28th, the team traveled, once again, to Gloucester County College, this time to win the Olympic Conference Championships. Already the winners of the American Division title, they planned to defeat, among others, highly-respected Triton and Washington Township High Schools and return the Conference Championship trophy home to Marlton!

Running perhaps the best race of the year, with every member of the team setting impressive PR's, the Cherokee Varsity had an unexpectedly easy time against their Conference competition. Senior Greg Bredeck, always in the shadow of super older runners such as Keith Kreiger (graduated 2004) and Tom Yersak (graduated 2005), won the race in an outstanding 16:05! He was immediately followed in 2nd and 3rd by teammates Alex Yersak, running a super Sophomore time of 16:10; and Senior Rich Nelson, who battled Triton's second man throughout the race and beat him in the last 100m (16:32)! Senior Vin Marziano, who has been battling a calf injury throughout the season, stepped up once again and took 10th place (16:47); and right behind him came Junior Colin Cunningham in 11th (17:00). Sophomore Kevin Schickling (20th) and Junior Mike Medvec (37th) backed up the scorers in the race, finishing with PR's as well!

Harbinger? On the sidelines, a keen observer noted that Coaches Shaklee and Callinan held out Senior Will Andes just as they had with past Varsity runners. Looking back, he said, Marc Pelerin, Keith Krieger and Tom Yersak -- all later named "SJ Runner of the Year" in their respective Senior seasons -- were held out of the Conference Championships. And now Andes . . . hmmmmm.

Before the Varsity competition, the JV and Freshmen ran their own race and everyone set PR's on the Gloucester County course! Leading the Cherokee contingent was Senior Matt Applegate who finished 1st in 17:35! He was closely followed by Sophomore Steve McCarroll in 3rd (18:08) and Junior Joe Foley in 8th (18:38). Rounding out the top five were Freshman Rob Roselli in a breakthrough race (19th in 18:51) and Freshman Marc Saccomanno (20th in 18:52). Sophomores Ryan Lutz (22nd in 19:00) and Liam Eells (28th in 19:15) completed the top seven.

The coaches selected Greg Bredeck as the "Runner of the Meet." Besides his outstanding time in the race, this was Greg's first BIG victory in Cross Country since he won the Footlocker Freshman Race at Van Cortlandt Park in New York City! GO GREG!

As a result of this performance, the Camden Courier-Post named Greg Bredeck the "Runner of the Week." The writer noted that his time of 16:05 was the fastest run at the conference meet since Eastern's Dan Deichert went 15:53 in 2002. And in another article, Jeff Wolfe of the Courier-Post had this to say about the meet: Fourth runners prove vital for winners.

On November 2nd, Cherokee participated in the Haddonfield Invitational or what might be called "The Last Chance Meet." As such, it is the last chance for runners not competing in the up-coming Sectionals to run their fastest times of the year! And no one was surprised when almost all of them did!

And, for the 5th year, it has been something else as well. To encourage additional competition, the coaches split up the Cherokee runners into two equal teams -- Team Shak, this year led by Junior Mike Medvec; and Team Cal, led by Senior Matt Applegate.

The race was close-fought throughout, with Team Shak prevailing in the end. Mike Medvec, running 17:01, won by only two seconds over a fast-closing Matt Applegate. Then Team Shak's Steve McCarroll took third in front of Team Cal's Joe Foley. They were closely followed by Team Shak's Marc Saccomanno ahead of Team Cal's Rob Roselli. With six runners in, the score was only 9 - 12. But then Ryan Lutz of Team Shak edged Liam Eells by four seconds, making the score 16 - 20 and putting the meet out of reach for the hapless Cal runners. The victory was sealed in a convincing fashion, however, when Sean Hartnett of Team Shak slipped by Ryan Elliott at the finish line, beating him by only one second! Final score: Team Shak, 25; Team Cal, 30!

Since the teams were as evenly matched as possible, the only explanation for this result must be the coaching! Indeed, over the past five years of competition Coach Shaklee's teams have prevailed over Coach Callinan's teams all five years! What else is there?!

Of lesser importance was Cherokee's performance against the other 11 teams in the race! There was no official team scoring but, unofficially, Cherokee won the race, scoring 45 points against their closest rival, Highland High School, with 85 points.

The coaches selected Junior Joe Foley as the "Runner of the Meet" based on his first sub-18 performance on a 5K course! GO JOE!

Return to the index for Cross Country Pictures, 2005