On October 19, 2008, most of the Freshmen and Sophomores traveled to Gloucester County College for the SJ Frosh-Soph Championships. Ryan Bobb was the team's top finisher, placing 6th in the sophomore race in a field of 123 runners; and Greg Malloy knocked a second off of his best time with his 35th place finish. The freshmen were led by Bill Hornung in 7th place, with Matt Venanzi not far behind in 14th. Andrew Yang ran well and finished strong to take 30th. And, even though Kyle Cook lost his shoe 200 meters into the race, he still managed to finish in 65th place! (Where was he when the pre-school class was doing the lesson on "how to tie your shoes?" . . . probably in the sandbox.)

The coaches selected Zach Roether as the "Runner of the Meet" for his best race so far this season! Zach improved more from the first freshman race of the year, the Cherokee Challenge, than any other freshman on the team! GO ZACH!

In the JV race, Cherokee had 5 of the top 10 finishers, led by a 1-2 finish of Frank Devine and Ryan Bobb! Cherokee's 3rd finisher, Josh Perez crossed the line in 7th, with a 35 second PR; and Josh Ungerleider and Mike Palmieri were close behind in 9th and 10th, both with season PRs! Greg Malloy and Mike Czuba ran their best races of the year to finish in 23rd and 24th with big PRs of 34 and 45 seconds respectively! And Kyle Cook also PRed by 39 seconds to break 20 minutes for the first time! Unofficially, the team finished 1st in their race!

The seven Varsity runners all ran well and dominated the very talented field of South Jersey's best! Chris Applegate finished in 4th overall, with Steve Burkholder right behind in 6th! Ryan McNair, Cherokee's 3rd runner, was in before any other team's 2nd; and Sean Hartnett, Cherokee's 4th man, crossed the line before any other team's 3rd! Only Washington Township had a 3rd in before Cherokee's 5th, recently-returned Marc Saccomanno! And both Kyle Smith, and Freshman Aiden Lynch, Cherokee's 6th and 7th finishers, were in before any other team's 5th man! Season PRs, for any course, were recorded by Applegate, McNair, Hartnett, Saccomanno and Lynch! Steve Burkholder did a great job of racing on a day when he wasn't at his absolute best; Kyle Smith looked great in his first race back from a broken toe; and Freshman Aiden Lynch did incredibly well in his first major Varsity race! Overall, Cherokee won the race with 43 points, another 43 points ahead of their closest competitor!

In the Freshman race, Bill Hornung led the team with his 2nd place finish and his first sub-18 minute 5k! Matt Venanzi also PRed to finish in 5th! Andrew Yang's 59-second PR earned him an 11th place finish and his first sub-20 clocking, with Mark Moorhouse and Dave Wallace also breaking 20 for the first time! Matt Adams, Jeremy Morgan and Zach Roether all set new PRs as well. Unofficially, the team finished 2nd in the race!

With so many great performances, it was very difficult to pick the Runner of the Meet. However, the coaches selected Mike Czuba because of the determination and aggressiveness he showed from start to finish. It was definitely the best race of his career! GO MIKE!

For a change of pace, here are some "artistic" pictures (PhotoShop CS3: Poster Edges) from the JV portion of the race!

On October 30, 2008, the JV and Freshman were "fired-up" for the Haddonfield Invitational because it is seen by many as their last chance to run on a fast, flat course and set their final season PR! But, over the past seven years, it has become something else . . . the only intra-squad contest of the year and a unique opportunity for coaches and athletes to win year-long bragging rights!

The team is divided into three squads, and history has not been kind to Coach Callinan. In 6 of the past 7 years, Coach Shaklee's squad emerged with the victory; and, last year, when Coach Thompson first joined the fray, that victory went to "the rookie." "A fluke," said Coach Shaklee, "the punk was lucky!" . . . and he was determined to prove that this year!

As usual, the team was divided, again into 3 separate entities, and each was given a distinct uniform to distinguish it from the others. Coach Shaklee had the men in Tennessee Orange, the uniforms the team wore when they won the Conference in 2005 and qualified for the Nike Team Nationals in 2007! They included (alphabetically) Matt Adams, Frank Devine, Adam Henriksen, Kyle Miller, Andrew Moorhouse, Josh Perez, Zach Roether and Andrew Yang.

Coach Callinan had the men in Texas Brown, the uniforms worn at Sectionals in 2006 and in the 2005 County Championships! They included Aiden Lynch, Greg Malloy, Jeremy Morgan, Josh Ungerleider, Matt Venanzi, Alex Walker and Dave Wallace.

And, finally, last year's winner, Coach Thompson, desperate to prove that last year was not a fluke, had his men in the uniforms of this year's County and Conference Champions, "the kids in pumpkin orange!" This select group included Ryan Bobb, Kyle Cook, Mike "Thompy's Protege" Czuba, Jason Hays, Bill Hornung, Mark Moorhouse and speedster Mike Palmieri. The big money was on this squad -- carefully selected so the young coach's self-image wouldn't suffer -- but, by the "two mile bridge," Coach Shaklee's team was scoring neck-and-neck, while Coach Callinan's team was pressuring the others but clearly showing the strain!

By the end, the victorious team was obvious! Tennessee Orange dominated the finish line . . . Coach Shaklee's team scored the upset! Young Coach Thompson was sent home wondering how he was so easily defeated, and the hapless Coach Callinan once again accepted defeat. Coach Shaklee was generous in victory, however, insisting that the victory banner displayed above the main entrance to the school be no more than 3 feet x 12 feet! Well, maybe 4 x 15, but certainly no larger!

The coaches selected two athletes as the "Runners of the Meet." Adam Henriksen for taking 1:30 off his time from last year and running sub-18 for the first time; and Dave Wallace who had the biggest improvement, dropping 1:15 from his previous best 5K time! GO ADAM! GO DAVE!

On November 4, 2008, Alum Joe Halin ('00) of the Moorestown Running Company passed along a photograph. It pictures the six guys who just won the 1998 Burlington County Championships with 28 points! From left to right: Mike Caputi ('00) - 8th; Aaron Boucher ('99) - 6th; Greg Robinson ('00) - 10th, Ben Werbos ('99) - 3rd, Joe Halin ('00) - 2nd; and Mike Urbanovich ('99) - 9th. Not pictured is 7th man Kevin Hurley ('01) who was 11th as Cherokee completely dominated the county! The race was run at Cherokee High School for the 4th year in a row before it returned to Mill Creek Park in 1999. The team went on to win the Olympic Conference Meet, the SJ Group IV Sectionals, and the State Group IV Championship before finishing a close 2nd to CBA in the State Meet of Champions! The following year, Cherokee improved on this performance at the County Meet by sweeping places 2 through 8 to win with 20 points! GO CHEROKEE! 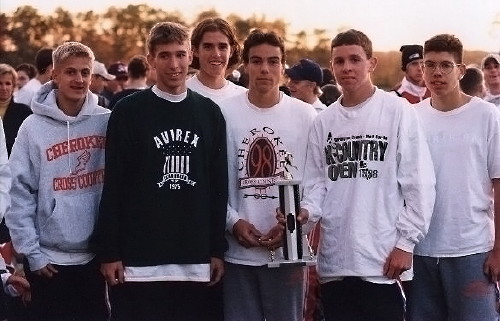 On November 5, 2008, the Junior Varsity and Freshman squads traveled to Thompson Park in Jamesburg for the Second Annual New Jersey Sub-Varsity Championships, a meet designed to close-out the season for all sub-varsity -- meaning those not going to the State Sectionals -- runners. Cherokee already did its "sub-varsity close-out meet" at the Haddonfield Invitational but this event, though somewhat anticlimactic, is a nice way to see what other teams have coming up in the future.

In the Freshman competition, running without the top three individuals -- Aiden Lynch, Bill Hornung, and Matt Venanzi -- the team managed an 8th place finish led by Dave Wallace, Andrew Moorhouse and Andrew Yang who all finished within two seconds of each other.

In the JV race, the team placed 7th in the field of 22 teams. Josh Perez led the way with his 20th place finish in the field of 317 runners, with Kyle Miller, Ryan Bobb, Billy Hornung and Frank Devine finishing the scoring.

The coaches selected Josh Perez as the Runner of the Meet for his first time at the front of the Cherokee pack! After a late start to the season, Josh has come on strong and is now showing that he has the potential to be one of the top varsity runners next year. GO JOSH!

For the record, Matt McCarroll still holds the meet record of 16:50 set in 2007, well below the 17:06 achieved this year by a Junior at CBA. The course was changed this year because of construction but the new design is still as flat and unimaginative as it was last year.

Yikes! The photographer lost the camera's # 1 Smart Card somewhere on the field yesterday and, as a result, there are no Freshmen pictures available. Sorry, guys! Here, however, are some pictures from the JV race!

Return to the index for Cross Country Pictures, 2008