The "Post Season" also includes the SJTCA Annual CC Banquet (Auletto's, Almonesson, NJ, November 28th), the Cherokee Team Banquet (Cherokee H.S., December 2nd), and a review of the accomplishments made by the team and individuals throughout the season! 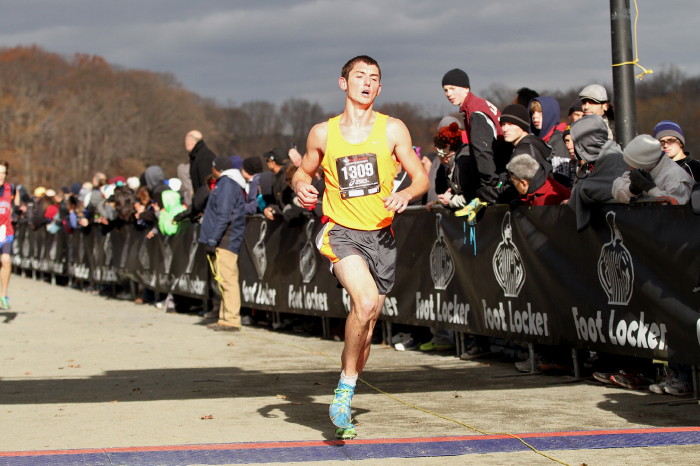 That's how it went during the Foot Locker Northeast Regional Championships weekend in New York City . . . everything was swe-e-e-e-e-et . . . including the spectacular championship race navigated by Senior Shawn Wilson at Van Cortlandt Park!

The race began with 170 competitors racing for one of ten top slots and a trip to the Foot Locker National Championships in San Diego, California! That included Shawn who set the 2012 Nationals as his goal after failing to qualify last year! Shawn did exceptionally well, finishing 3rd behind two previous Foot Locker Finalists, Edward Cheserek of New Jersey (1st at both Regionals and Nationals) and Jonathan Green of Massachusetts (7th at Regionals and 22nd at Nationals)!

Shawn ran a smart race throughout, staying with the front group until Cheserek and Green began building a lead after the mile. He then made the decision to keep them close but not to run with them -- the goal, he remembered, was to qualify not necessarily to win. When several others challenged his 3rd place position at about the two mile mark, Shawn kept his lead over them all the way to the finish!

Shawn's 3rd place finish is the best ever by Burlington County runners at Regionals! Cherokee's Assistant Coach, Marc Pelerin held the previous best, a 6th place finish in 2001. Shawn joins Pelerin, Eric Lorenz of Holy Cross (8th in 1987) and Jon Anderson of Cinnaminson (7th in 2003) as the fourth county runner to qualify at Regionals!

Runner of the Year

On November 25, 2012, the South Jersey Track Coaches Association named Shawn Wilson their Runner of the Year, the highest compliment that can be given to a cross country athlete in South Jersey because the voting comes from a large group of knowledgeable cross country coaches and professionals! This is the second year in a row that Shawn was recognized for the honor. He was also named to their All South Jersey Cross Country Team for a second year! The official presentation will be made at their annual banquet. Complete list at: SJTCA.

On November 28, 2012, the South Jersey Track Coaches Association sponsored their annual banquet and it might have been named the Shawn Wilson Dinner! Shawn was first recognized for being the only State Champion from South Jersey! Then he was called upon again as a member of the All-South Jersey Cross Country Team; and finally as the Runner of the Year! Shawn used the opportunity to thank all of those who helped him achieve his goals as a runner: the South Jersey Track Coaches Association; Cherokee's Athletic Director; his teammates; his many coaches (official and otherwise); South Jersey's unofficial and Shawn's personal photographer; the chef at Auletto's who prepared everything to Shawn's liking; and, of course, his long-suffering parents who support him in everything he does . . . oh, wait, did he forget his parents? . . . Never mind . . ..

Great Save! Shawn's "Finalist Page" on the Foot Locker website provides interview questions and Shawn's answers: the last goes down as his "greatest save of the season!" See Foot Locker or Foot Locker page snapshot.

Addendum: Perhaps hearing of Shawn's appreciation for Kentucky Fried Chicken, Japan Airlines just announced that they will serve KFC as an in-flight meal! No kidding! Does Japan Airlines fly between Philadelphia and San Diego?

On December 2, 2012, Cherokee's Cross Country team held its annual awards dinner at the school. There the team, coaches, families and friends, enjoyed a meal together, applauded the team for their efforts, and bid farewell to the graduating seniors.

Highlights included the great meal provided by the parents; the Coaches' awards, including the Most Valuable, Most Improved, and the Unsung Hero; remarks by graduating seniors, Coach Shaklee's remarks to the team -- Coach's Message -- and, finally, some irreverent remarks from team members to their coaches!

No one was surprised by the awarding of the Most Valuable Runner Award to Shawn Wilson but it was nice to see Kaleb Burch receive the Most Improved Award and Rob Harper receive recognition as the Unsung Hero of the team!

That was followed by the Seniors remarking on their experiences and thanking coaches, teammates, and parents for their efforts! Gag gifts were also presented, the best of which had to be the several boxes of Kleenex for Coach Pelerin from Shawn Wilson, one for each record he lost, or is going to lose, this year!

No pictures from the banquet but here is an unusual look at our graduating seniors as they begin to fade from our view (insert teary-eyed sad face here)!

On December 8, 2012, Shawn Wilson traveled to the Foot Locker Nationals at Balboa Park in San Diego, California, Only the third runner in Cherokee history to qualify for the Nationals -- Marc Pelerin qualified in 2002 and raced at Walt Disney World and Megan Lacy qualified in 2010 and raced at Balboa Park -- Shawn entered the race as the 3rd seed from the Northeast Regionals but there were thirty nine other great athletes from all over the country who also qualified for this prestiguous race!

Foot Locker provided everything for the athletes: their flight to and from San Diego, their food and lodging at one of the top resorts in the region, loads of goodies for training and racing, and just about everything else they might desire, except, perhaps, steady access to Sausage McMuffins!

Two of Shawn's coaches also traveled to the meet -- Coach Shaklee and Coach Cuneo -- but they had to settle for lesser quarters than those provided by the race sponsors!

Shawn ran tough throughout the race but had to settle for 23rd place in the field of forty, clocking 15:45 on the difficult course. Shawn was the second New Jersey runner to finish. Details on the race at: Foot Locker.

The following pictures by MileSplit photographers were selected from the Internet. Can we ever have too many Shawn Wilson pictures?!

The Star-Ledger of Newark

On December 16, 2012, Jim Lambert, sports writer for The Star-Ledger of Newark, and generally considered the premier writer and spokesperson for high school running in the state, named Shawn Wilson to his All-State, 1st Team; All-Group IV, 1st Team; and All-South Jersey, 1st Team! Congratulations to Shawn on this recognition! Articles at: Star-Ledger On Line.


Return to the index for Cross Country Pictures, 2012