Once again, last year's seniors and captains have graduated but their names remain with us, a large part of Cherokee Cross Country's history of dedication and commitment: Cerria, Decker, Hare, Mintzer, Rasmussen and Wilson. It won't be the same without them but it shouldn't be. They left their marks and moved on, leaving the field for a new generation of upperclassmen and Freshman who will, in turn, leave their own marks in the history of Cherokee and New Jersey Cross Country!

As everyone in New Jersey knows, Cherokee Cross Country has set an impressive record over the past fifteen years or so: sixteen consecutive appearances at the State Group Championships, and, until 2010, twelve consecutive appearances in the State Meet of Champions, with five State Championships during that time. Now, as it has over all those years, it comes down to how committed the team is through their summer training, how hard they worked then, and how hard they'll continue to work to add to that illustrious history!

On July 4, 2013, several current cross country team members and a number of Alums participated in what is supposed to be a "fun run" but, even with the serious heat and humidity, is fast becoming a personal time-trial for some and a kind of reunion for the team! Current team members in the race included Kaleb Burch, Zach Lopresti and Noah Gil, and a newcomer Nick Falk. Alums who made a showing included Shawn Wilson, '12, who finished 3rd overall in 16:21 (1st in 16:46 last year); Kyle Miller, '09, who finished 5th in 17:45 and dropped almost a minute off his time last year!; Mike Candy, '05; Steve McCarroll, '08; Bill Hornung, '12; Matt Decker, '13; Brandon Ilagan, '13; Jeremy Morgan, '12; Dan Mintzer, '13; and Freddy Rasmussen, '13. Details at: L & M Sports. Alas, no pictures of the racers are available.

In late August, for the fifteenth year in a row, many members of Cherokee's Cross Country team attended the extraordinary RunningWorks Cross Country Camp in Canadensis, Pennsylvania. There they participated in a week-long program of training with top coaches and athletes from the Northeastern United States, learned from special guest speaker, Olympian Julia Culley and our own RunningWorks' Director, Olympian Marcus O'Sulivan, and danced (and drilled) with Jamaican Olympian Ringo Adamson!

The following pictures are of Cherokee athletes at camp. A wider selection of pictures from camp is available at RunningWorks Cross Country Camp Photos.

On September 7, 2013, the team spent a long weekend in Massachusetts where they competed in the 7th Annual Martha's Vineyard XC Invitational! That was unusual enough but probably the most unique aspect of the weekend was the expected 45 minute ferry ride to the island on the morning of the meet! But the word is that Coach Shaklee, annoyed with the slow speed of the ferry, forced his runners to swim to the island! NJSIAA is investigating!

Beyond that rough introduction, the team acquitted itself well in the meet, with the Varsity taking 2nd behind a local team, and the Junior Varsity finishing 1st in an unscored race! Senior Kaleb Burch led the team as he took 2nd in the 5K race, and Junior Justin DeTone followed closely taking 6th! For the first time in as long as anyone can remember, two Freshmen ran on the Varsity squad and one, Jack Shea ran well enough to take 3rd on the team and 15th in the race! Newcomer, Senior Nick Maccariella took 5th for the team and 22nd overall; and Freshman Nick Falk closed out the scorers, taking 30th in the race!

In the non-scoring Junior Varsity race, Cherokee's runners raced well enough to have won the event! Led by Sophomore Mike Zarzolo in 2nd, Junior James Transue in 5th, and Senior Anthony Marrazzo in 7th; and followed by Junior Noah Gil and Sophomore Tyler Kurzawa in 16th and 17th, the team outscored their closest rivals by a slim margin!

Thanks to our unnamed student photographers who provided the following pictures! 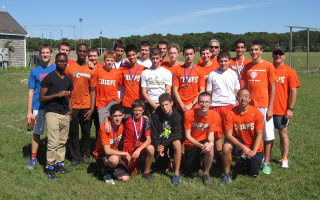 On September 18, 2013, the team traveled to Gloucester County College for Olympic Conference Batch Meet # 1 against Eastern Regional and Washington Township High Schools and they outdid expectations when they defeated by both teams by comfortable margins!

Leading the race for Cherokee were Kaleb Burch and Justin DeTone who went 1-3 and dropped several seconds from their performances last week! Cherokee's super freshmen, Jack Shea and Nick Falk continued to impress as they finished 3rd and 4th for the team and beat their counterparts from both Eastern and Washington Township! Joe Lacy and James Transue ran strongly over the 2nd half of the race to finish in front of Washington Township's 4th man and Eastern's 3rd man, which gave Cherokee a pretty convincing win!

Comparing times from the previous 5K race at Martha's Vineyard -- a fairly comparable course -- many runners dropped their times significantly. Indeed, James Transue, Noah Gil and Mike McShane clocked huge improvements but they were overshadowed by the 56-second improvement shown by Carlo Lingeso, who the coaches named Runner of the Meet! GO CARLO!

On September 21, 2013, Cherokee High School, the Cross Country coaches and team, and the team's parents and friends, hosted the 18th Annual Cherokee Challenge on campus, welcoming over 2500 athletes to the meet! It was a great day and everything worked well but the team failed to score in any major way.

The "trick" at the Cherokee Challenge is to get out fast because it's a short 2 mile course, and the sharp turns and narrow trails in the first mile allow the front-runners to break away while everyone else struggles to navigate the crowds and stay on their feet! Unfortunately, everyone knows that "trick" so everyone goes out insanely fast and only the strongest can handle the speed and stay in the front!

Senior Kaleb Burch ran well enough to take 33rd in his race but, stuck among a large group of runners, he ran only two seconds faster than last year. Junior Justin DeTone had a terrible start and spent the rest of the race working his way up through the crowd to finish 31st (one place out of the medals)! He did, however, drop 16 seconds from last year's time!

The coaches were very impressed with that last effort and selected Nick Falk as the Runner of the Meet! GO NICK!

On September 24, 2013, the team returned to Gloucester County College for the third of four "dual meets" as they compete for the American Division title in the Olympic Conference. Last week, they defeated both Eastern and Washington Township High Schools but this time they came up a little short against the defending Olympic Conference Champions, Lenape High School.

Checking the results, Jack Shea dropped his time quite a bit from his last race and is running very well for a freshman! Also, it's great to see his classmate, Nick Falk, get under 18; and to see Nick Maccarella back running! James Transue has been improving steadily, and Noah Gil dipped under 19 for the first time! Steve Gravlin improved considerably, going well below 20 minutes for the first time! But Rob Curley showed the biggest improvement as he dropped his time by almost a full minute and, for that reason, the coaches selected Rob as the Runner of the Meet! GO ROB!

On September 28, 2013, the team was scheduled to race at the SJ Shootout at Gloucester County College but the coaches decided to look to the future and train though the meet. That is, except for several Freshmen who were expected to do particularly well in their race.

Jack Shea, Nick Falk and Michael McShane were scheduled to run but, at the meet, Nick complained of hip problems and the coaches decided to sit him out. That left Jack and Michael to represent the team, and both had their best races of the season!

Jack's performance was particularly impressive as he won the race by the huge margin of 32 seconds over the 2nd place finisher in the field of 84 runners! His time was the 2nd fastest run on the GCC freshman course and was only a few seconds off of the course record! For those reasons, the coaches recognized Jack as the Runner of the Meet! GO JACK!

Return to the index for Cross Country Pictures, 2013