Mid-Season: the competition heats up!

OK, let's get real! The weather cools a bit but the competition heats up fast in this part of the season! Wappinger Falls, Shore Coaches, Manhattan -- nothing's easy! -- and then we return to South Jersey for County and Conference! All great opportunities to show how good we are! But they're relatively small steps towards our ultimate goals . . . States . . . Regionals . . . Nationals!

On the weekend of September 24-25, 2016, the team traveled to Wappingers Falls, NY for the Bowdoin Park XC Classic. The idea was to check out the course that Nike uses in November for their Regional Championships, and to make a statement for the teams back home. Well, one out of two ain't bad!

The Varsity squad, coming into this off of several weeks of tough training, ran well but looked a little flat. Still, they finished 2nd behind CBA in the Varsity 1 race! Jack Shea ran with the leaders through most of the race but lacked the finishing speed he will have at the end of the season. He finished a respectable 2nd to lead the team! Justin Kelly ran conservatively through the first 1/2 mile and had to make up a lot of ground over the rest of the race. Tough as he is, he was able to do so, moving from about 35th to 7th by the end of the race! Brandon Marks and Brendan Falzone did well enough but that dependable two-some will need to be step-up a lot when Cherokee hits the championships. Nick Falk cramped up during the race and struggled greatly over the last mile. Finally, Cam Wilburn ran a good race to finish not far behind Falzone, while Matt Smith ran another solid race in his first appearance in the Varsity Seven. Overall, the results were just OK but it gave the team a good idea of what they need to do between now and November to be competitive at Group States, MOC and Regionals. GO CHEROKEE!

The JV squad faltered a bit after their strong showing at the Battle of Ocean County Park. Joe Falk ran well, finishing 9th! However, the rest of the team struggled with the difficult terrain and could manage only a 6th place finish. The team definitely needs the JV squad to step-up . . . GET GOING CHEROKEE!

The Freshmen were, once again, the highlight! Chris Spisak ran a very smart, tough race to take the individual victory and lead the team to a close win over 2nd place LaSalle of Rhode Island! Chris stayed with the leader from CBA and put him away with a strong finishing kick! For his efforts, Chris earned Athlete of the Meet honors. Close behind Spisak, Chase Miller ran a tough race to finish 4th, with Ethan Wechsler in 9th, Mike Gavio in 13th, and Bobby Hackney in 18th, completing the scoring for the team! Tyler Jackson continued to show steady improvement, running 33 seconds faster than his Ocean County Park time (the biggest improvement of all the freshmen), while Matt Campbell ran well in his first race of the season! Wow! GO CHIEFS!

No Paint Ball Wars this year because of the location and, while Coach Shaklee considered Cliff Diving into the Hudson River or Bungie Jumping from the Poughkeepsie Bridge, Coach Thompson pushed for a visit to the Bardavon 1869 Opera House or a movie at U-puku-ipi-sing, a place-name derived from the Wappinger language, roughly meaning "the reed-covered lodge by the little-water place." By popular demand, the movie it was! GO THOMPSON!

Team managers videotaped the races but here are some edited versions of low-resolution pictures lifted from the NY.MileSplit site:

Here are several provided by one of those who traveled to Wappingers Falls. The first one appeared almost miraculously . . . ever see those paintings from the Renaissance where bright lights illuminate saintly figures? . . . "Saint Jack of Marlton?!"

Briefly, except for one member of the Varsity squad, Cam Wilburn, the team didn't race because of SAT's and a recruitment trip. Cam didn't run as fast as he had hoped but managed to drop 51 seconds off his time from last year! The JV team did compete and, once again, Joe Falk led the team with his 14th place finish, running only 1 second slower than Cam in the Varsity race! Matt Smith also had a good race, finishing in 24th!

Once again, the Freshman team provided the highlight of the meet for Cherokee. Chris Spisak ran a tough race against a CBA runner (who broke the course record at 11:09) and, though he came up short of victory, he did manage to run one of the fastest times ever on that course! His time of 11:16 broke Cherokee's school record of 11:23 set 15 years ago by Sean McLaughlin! Behind him, the Chiefs got strong races from their other six guys. Chase Miller ran a very tough race to take 3rd, with Ethan Wechsler in 11th; Bobby Hackney in 13th; and Mike Gavio in 14th! Combined, they took the Freshmen Team Championship with fewer than half the points of runner-up, CBA! Also, the team's 5-man average of 11:47 set a new course record, breaking the old mark of 11:49 established just last year by East Brunswick! Non-scorers, Tyler Jackson and Matt Campbell also ran well as our 6th and 7th finishers!

Clearly, the Runner of the Meet had to come from the Freshmen team but the coaches realized there was no way to focus on a single individual after the entire Freshman team raced so impressively! Their solution: they cleverly awarded the honor to the entire Freshman squad! GO FROSH!

Finally, for the first time, the meet organizers opened a race for coaches and Coach Thompson took the challenge! Curiously, they decided not to post the results! Really! Unofficially, the coach clocked 18:43 and finished 7th in the race! We'll continue to look for official results but, in the meantime, we heard the coach was happy with his time, and happy he beat half the team, though not the half he wanted to beat! Go COACH THOMPSON!

On October 7, 2016, the team dolled themselves up for their yearbook pictures only "to be left at the alter!" (Who wrote that sentence?!) Fortunately, their highly-paid flunky photographer was available to capture their efforts to use the time productively. Below, the Juniors, Seniors and Freshmen designed their own team pictures:

On October 8, 2016, the team traveled to one of the oldest and most-revered cross country courses in the nation, VanCortlandt Park in New York City, for the Manhattan High School Invitational.

Once again, the Freshmen won their race! That is, if you follow any nationally-recognized rules for breaking ties! In their race, three schools tied with 49 points: Cherokee, Shaker and Shenandoah. The Federation rules recognize the 6th man as the tie-breaker and Cherokee's 6th finished well before the other schools' 6th men. Manhattan, however, uses it's own "rule" for ties, using the 5th man as the last scorer and the tie-breaker. They gave the win to Shaker whose 5th man finished 15th against Cherokee's 5th man who finished 21st. Had they used the nationally-recognized standard, they would have awarded the trophy to the Chiefs as Cherokee's 6th man finished 24th while Shaker's 6th man finished 78th! The 5th man tie-breaker rule used to be the tie-breaker rule before Coach Shaklee was born but it hasn't been used anywhere except Manhattan since the 1970's. Get with the program, guys!

Whichever you accept, there's no debating the excellent race the Freshmen ran! Chris Spisak and Chase Miller took 1st and 2nd, with Miller only a second behind Spisak at the finish line! Then the 3-4-5 men did their jobs, with Ethan Wechsler in 9th; Bobby Hackney in 16th; and Mike Gavio in 21st! Charlie Fischer, in his first competition of the season, ran a very tough race to finish in 24th, just ahead of Tyler Jackson in 25th! Simply put, the Freshmen just keep rolling!

The Junior Varsity team ran pretty well with Cherokee's A team finishing 10th out of the 37 teams in their race! Mike Iannotta led the way with his 34th place finish in the field of 260, followed closely by Mike Moraschi in 43rd!

The Varsity continues to struggle to find their form. Although they finished 2nd out of 27 teams in their race, it was a less than stellar performance. The best run was turned in by Brandon Marks who finished in 14th as Cherokee's 4th man and was only 11 seconds behind Nick Falk, Cherokee's 3rd man in 8th (with Justin Kelly in 7th, and Jack Shea in 4th). Although Cherokee didn't get great performances from the top three, they all ran respectably and, with four in the top fourteen, the team showed what they are capable of even on an average day. The key area for improvement is having someone step-up as the fifth man and close the gap on the first four.

The coaches selected Freshman Chase Miller as the Runner of the Meet to recognize his outstanding performance at the meet . . . clearly the best race he has had all season! GO CHASE!

The team's personal photographer refused to drive to Vanny for the meet but he searched the photo files at NY.MileSplit and selected/edited the following pictures. "Some say," as Donald Trump would say, that only the bold and the beautiful were photographed . . . you decide. 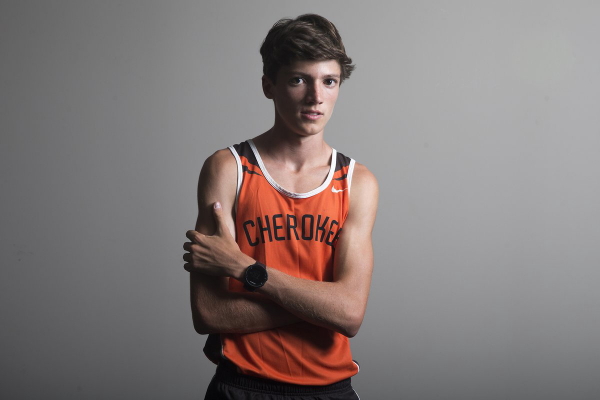 Year after year, Cherokee's history at the Burlignton County Open is a "tough act to follow" because it creates huge expectations for the present! The records are almost overwhelming: seventeen Team Championships since 1988, fifteen since Coach Shaklee took over the program in 1995 . . . seven County Champions since 1995 . . .. Yikes!

But this year's team wasn't intimidated, and that goes double for those who competed in the Open Race!

The Open Race was a stunning performance, with The Chiefs taking the first 10 places and 15 of the first 25! Freshman, Chase Miller, led from start to finish and ran faster than Cherokee's 7th man in the varsity race last year and this year! His first 5K of the season . . . totally nuts! Joe Falk continued his steady improvement with a strong finish to take 2nd with a time equal to our 7th varsity runner from last season! Behind him, Matt Smith improved by 87 seconds over last year to take 3rd! Jon Conn, David Jackson, Bobby Hackney, Ethan Wechsler, Mike Iannotta, Mike Moraschi and Mike Gavio swept the next seven spots! To put it in perspective, Mike Iannotta in 8th, ran a little faster than last year when he finished 2nd. The team's depth has definitely improved! Others in the top 25 included Matt Morgan, Taha Rana, Tyler Ortiz, Pat Mahoney and Mike Algarra Pat Mahoney had the biggest improvement from last year, 90 seconds, to earn Runner of the Meet honors! GO PAT

In the Varsity competition, Justin Kelly ran his best race so far to place 2nd ahead of his senior teammates, Jack Shea and Nick Falk, who were right behind him in 3rd and 4th! Brandon Marks ran another strong race and kicked fiercely over the last 100m but couldn't quite hold off 1:52/:48 half-mile runner, Kevin Fox, of Moorestown, finishing 7th. He made him work for it, however! In his first Varsity competition of the year, Freshman, Chris Spisak, finished as Cherokee's 5th man with a very strong race while both Brendan Falzone and Cam Wilburn knocked plenty of time off their 2015 county results!

All of that being said, it was a step in the right direction, but Cherokee still has further to go to be in contention at the upcoming Group IV State Championships and the State Meet of Champions! GO CHEROKEE!

Return to the index for Cross Country Pictures, 2016