On October 17, 2018, the team returned to Dream Park in Gloucester for the Olympic Conference Championships and came home the victors!

Within the meet, the American Division Championship, of course, went to Cherokee as well with a 20 - 62 win over runner-up, Cherry Hill East!

Behind Wechsler, Juniors Chase Miller and Chris Spisak took 3rd and 4th while Sophomore, Jack Shea, (OK, brainfart, it's BRETT but he raced like Jack!) ran his best race to date to take 7th! Mike Gavio rounded out the scoring for Cherokee with an 11th place finish, and middle distance standout, Tyler Jackson, demonstrated that he can also run long distance with a huge 5K PR to get 18th in the field of 143 runners! Nico Grilli finished in 26th; Dylan Odud finished in 30th; Bobby Hackney (now known to the Chiefs as "Bobby One Shoe!" or maybe "Bobby Sock-Foot"?) took 31st; and Mike Moraschi took 50th, giving Cherokee 10 runners in the top 50! Matt Campbell was our 11th finisher, still within the top 1/2 of the field at 70th position!

By the way, it's also nice to note that Cherokee's first nine finishers were underclassmen and will return next year!" GO CHIEFS!

The coaches selected Tyler Jackson as the Runner of the Meet! Ty had a breakthrough race -- one wag suggested he made a big mistake! -- when he showed he is not just a middle distance guy but can also be a force in cross country! GO TY!

Oh Baby! Reuben Frank, writing for the SJTCA web, again has Cherokee in the 5 exclamation point !!!!! headline category in his article on the meet! Maybe when Cherokee wins the Group Championships, he'll move to an unheard of "6 exclamation points?!" GO CHEROKEE! GO ROOB! See article here: Frank Blog: From the Backstretch and note our correction! 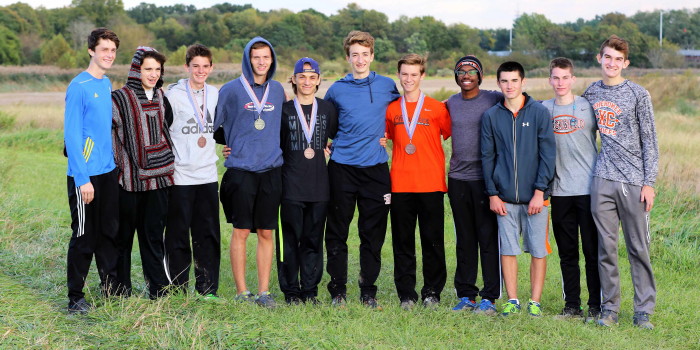 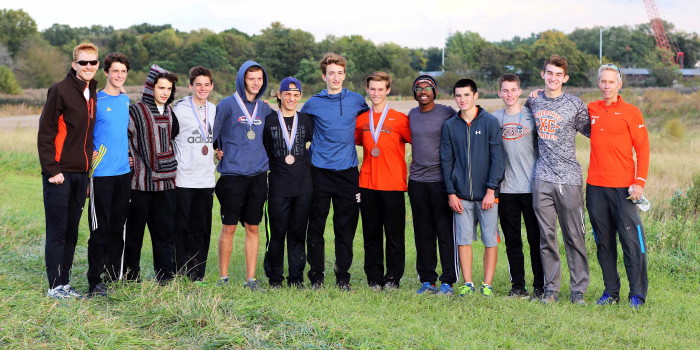 On October 17, 2018, the South Jersey Track Coaches Association again selected Cherokee XC as the # 2 team in South Jersey (after Haddonfield Memorial) in their sixth weekly poll! This week the coaches looked at the Burlington County XC Open and the Olympic Conference Championships when making their decision! GO CHIEFS!

The poll is available at: SJTCA Poll.

Also, NJ.MileSplit does a number of "rankings" to generate discussion and this one gives some interesting up-to-date statistics: Team Scores.

On October 24, 2018, the team traveled to Haddonfield's Pennypacker Park for the Haddonfield JV and Freshman Invitational. Years ago, there were no decent meets where Sub-Varsity and Freshmen runners could end their seasons, and this course was ideal because it was flat, fast and firm: a great opportunity for an end-of-the-season PR! In addition, it often helped coaches decide who would run "Varsity" in the upcoming championship meets. But, perhaps even more important, eighteen years ago, Coach Shaklee and then Coach Callinan (now at Central Administration) increased the competitiveness of the meet by setting-up a unique intramural contest that continues to this day! For the record, by 2017, Coach Shaklee's teams won the contest 11 times, Coach Callinan's teams won 2 times, and Coach Thompson's teams won 2 times! (No one knows what happened those other 2 years!) This year, two evenly divided Cherokee teams stepped up to the start line with two colorless (Come on, guys!) names: GO TEAM SHAK! GO TEAM THOMPSON!

"The team had a good day at the Haddonfield Invitational with everyone running their fastest 5K of the season! Although the meet director didn't do a team score in this meet, if they did Cherokee would have won both the JV and the Freshman competitions!

In the JV race, the Chiefs would have won if the rest of the teams were combined into one to face us! It would have been Cherokee 27 / Everyone Else 28! Tyler Jackson was the individual champion but was pushed to the line by teammate, Dylan Odud who PR'd and went under 17:00 for the first time! Close behind the two of them, Bobby Hackney also broke the 17:00 barrier for the first time in 4th place! Mike Moraschi ran another good race for 7th and both Ty Ortiz and Matt Campbell dipped under 18:00 for the first time!

In the Freshman race, the team scored 42 points to top runner-up Cherry Hill East by 24! Lucas Hatch pulled a "Bobby One Sock" Hackney and lost his shoe early in the race! Unfortunately, the course has a lot of hard surfaces so, unlike Bobby, Lucas was forced (by the coach) to drop out with a 1/2 mile to go as he was limping along. Other than that mishap, the rest of the group ran well with 3 guys in particular standing out: Joe Natoli, Bradley Popler and Kevin Hess who all finished in the top 10 and all knocked over a minute off of their previous best times! In doing so, they made it impossible to pick just one of them so they all earned Runner of the Meet honors!" GO JOE! GO BRAD! GO KEVIN!

Coach Shaklee dealt briefly with the intramural battle! "The Shak vs Thompson team battle was relatively close with "Lucky" Thompson pulling out his 2nd consecutive victory by one point." That's it folks! That's all he said! Hmmmm . . .. Wasn't it Shak who said: "The person who said winning isn't everything, never won anything!"? ; < )

Several years ago, Kevin Callahan (no relation to our former coach, Mr. Callinan) used the "Map My Run" website to chart Holmdel's Championship Course, including changing elevations, and it provides some interesting information to the curious! For example, the first mile of the race feels like you're "climbing" Mount Everest but what's really the difference between the course start and the highest point on the course, and where is that high point? (Hint: our photographer often shoots outgoing races at the course highpoint!) How deep is that bowl? At the 2-mile point, almost every coach yells, "It's all downhill from here," but is it really? You probably have lots of questions and this website offers many answers! If you haven't seen it, give it a look! Map My Run.

On October 30, 2018, the Junior Varsity and Freshman members of the team bussed to the Olympic Conference JV/Frosh Championships at Dream Park in Gloucester County, NJ.

Before getting to that, study the picture below and decide which of the following is the most likely caption: 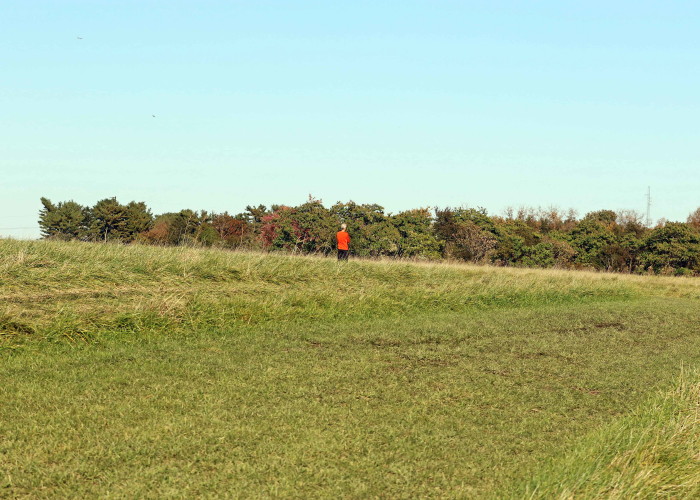 Now on to the important stuff! Coach Shaklee was impressed by the team's performance! He began by saying: "Another very muddy, windy, slow day to run!"

"Although we were without several key guys -- Ty Jackson, Dylan Odud, Bryan Lafferty -- the team still fared well against the rest of the conference! Bobby Hackney was the class of the field, winning by 30 seconds over the 2nd place finisher, and he managed to finish with both shoes where they belonged! In doing so, Bobby earned Runner of the Meet honors! GO BOBBY!

Although the meet was not scored, had it been, the team would have won with a score of 30 points, 26 ahead of 2nd place Shawnee! Mylo Barkow - 18th, Jameson Crozier - 21st, Aiden Dickinson - 24th, Bradley Popler - 25th, and Kevin Hess - 28th gave Cherokee ten of the top thirty finishers, five of whom are freshmen!

It was a good last race for most Cherokee runners and shows some excellent potential for a strong 2019 cross country campaign!"

Occasionally, we highlight a 2013 article by Patrick Bendrick that appeared on the Massachusetts page of MileSplit, The Fifth Man, because it emphasizes how important the fifth man is on a cross country team. As you know, scoring in cross country counts the top five men on a team and that fifth man's performance can, as they say, make or break a team! The article rightly points out that, if the team's super star has a "bad" day in a big race (with relatively few around him), he may drop from the top 5 to the top 10, not a great blow to the team's chances. But, if the fifth man has a "bad" day (with far more competitors around him), he may lose 50 to 100 places (points) depending on the size of the race! Yikes!

There are some other points made in the article and you are encouraged to read it but there's one factor not mentioned that probably should be: it ain't just the fifth man who is important! Coaches routinely list their top 7 Varsity runners in order, and that's the order in which they expect their runners to finish. But it frequently doesn't work that way: #1 is a little off that day and #2 fills his place, or maybe the regular #3 man blows by both of them! Or the 7th man becomes the 4th man to finish on the team. The point is, the "fifth man" isn't always the fifth man to finish on a team, and maybe focusing on him distorts the situation. Runners need to remember that even if they're having a bad race, rather than getting depressed, they still count and every person they pass is another point for the team! First man, third man, fourth, fifth or seventh, each member of the team is incredibly important and they should never forget that!

That goes for team members who are not on the Varsity team or didn't make to THE BIG RACE! You are incredibly important to the success of the team and, when you recognize how important you are and work hard to win a top place on the team, you've truly become a cross country runner! GO TEAM!

Patrick Bendrick's article can be found at: NJ. MileSplit or copied on this webpage: The Fifth Man

On October 31, 2018, NJ.MileSplit updated their NJ Ranking Poll and Cherokee remained at 3rd place behind powerhouses CBA and Haddonfield Memorial! Of course, the Varsity didn't run this past week so they had little to go on other than past performance! In addition, the SJTCA Ranking Poll for South Jersey continues to list Cherokee in 2nd place behinf Haddonfield Memorial and ahead of Kingsway. Obviously, Cherokee's performance at Sectionals will make all the difference! GO CHIEFS!

State ranking at NJ.MileSplit, and the South Jersey ranking is at: SJ Track.


Return to the index for Cross Country Pictures, 2018