Generally, at the beginning of the season, the South Jersey Track Coaches Association announced their 1st SJTCA Cross Country Team Rankings but, with no previous Track season and no previous races this season, any attempt to rank South Jersey's teams would be "a magic carpet ride," to say the least! Cherokee's first opportunity to make a concrete statement on the rankings will be at the first Batch Meet on October 3rd. In the past, Coach Shaklee preferred to use the Batch Meets as workouts rather than races but in this year of the Coronavirus things may well be different! Stay tuned! GO CHEROKEE!

Recently, the team's photographer had to laugh while reading an article on "Fending Off Painful Side Stiches" when he came across the phrase, exercise-related transient abdominal pain!! "Transient, my butt," he thought, "not when you're racing!" And then he remembered at least three unfortunate young runners on the team who obviously suffered from exercise-related transient abdominal pain during a recent practice and he hoped they might profit from reading Elizabeth Carey's, "Fending Off Painful Side Stitches Requires Thoughtful Approach To Fueling, Warm-Up, Breathing" that appeared in Dyestat.

Check out her work at Dyestat, or read a copy on our server at Carey on Side Stitch. You won't feel so clueless and helpless if it happens again!

On October 3, 2020, the team traveled to the aptly-named DREAM Park and opened their season at the Olympic Conference Batch Meet # 1! Coach Shaklee was very impressed by what he saw and he reported the following:

"The team got off to a good start to the season at the first Olympic Conference Batch Meet at Dream Park. Running under ideal weather but on a course that was wet and a little sloppy, the boys showed that they are a team to be considered this year . . . and in the years to come!

"Senior Nico Grilli set the tone with a commanding win! Nico ran with the leaders from the start and pulled away over the last 600 meters to win by seven seconds! Senior Brett Shea, while not having his best day, still maintained a strong effort and finished 6th! Third for the team was Sophomore, Conor Jacob, in 8th place with an 8-second PR! Dylan Odud, Patrick Ditmars, Bradley Popler and Tommy Bromley swept places 11 through 14th to secure a 2nd place team finish behind Cherry Hill East, the 4th ranked team in the state pre-season poll! Ditmars and Bromley also set new 5K PR's!

"With the slew of fine performances, there are so many choices for Runner of the Meet! The coaches decided to go with Joe Hough who, through his hard work, has improved so much over last year!" GO JOE! 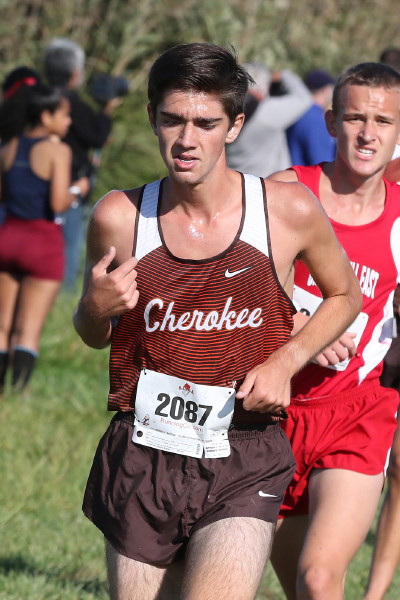 Details on the meet are available at: NJ.MileSplit. 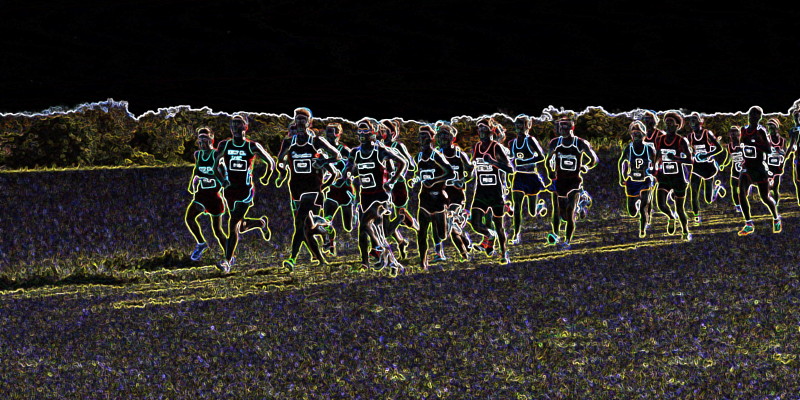 Jon Falk, a retired biggie from the Philadelphia Inquirer and the Philadelphia Daily News, and grandfather of Alum Nick Falk '17, wanted to try a new camera and lens somewhere so we invited him to the meet. Here are a few that he caught and, if he comes again, we'll locate him away from our regular photographer! As Yogi Berra once said, "It's like Deja vu all over again!" ; < )

On October 10, 2020, the team returned to DREAM Park for the Olympic Conference Batch Meet # 2! "Unofficial Observer" Shaklee sent the following comments on the meet!

"Although Cherokee and Washington Township did not run in the same race at Batch Meet # 1, the form chart showed Cherokee losing to Washington Township by a point! This week, when we were scheduled to compete in the same race, Washington Township came in ready and they ran a strong race, improving on their times from week 1. However, we were able to improve just a bit more and took the victory by a score of 35 to 37 with Lenape a distant 3rd with 75 points! Despite the fact that all seven varsity runners improved, we still have more to work on, namely the 2nd half of the race! We were out aggressively (in some cases too aggressively) and had a huge lead on Washington Twp at the mile! They stayed patient and ran tough over the last two miles to close the gap and come very close to taking the win1 That is definitely something for us to work on . . . running a more consistent race, staying focused and racing tough over the last 2 miles of the race! We will need to do better at the upcoming Olympic Conference Meet!

"On the positive side, there was a lot to like in the varsity race! Nico Grilli ran another impressive race leading from wire to wire and recording the 5th fastest time ever on the Dream Park course! Brett Shea showed marked improvement from week 1, knocking 20 seconds off his time and holding off the fast-closing top-2 from Washington Township! Despite his overly aggressive start, Conor Jacobs was able to still improve by a couple of seconds, holding off Township's 3rd man! Dylan Odud ran a strong race, improving by 21 seconds and almost catching Township's 4th man! Patrick Ditmars ran a very focused race, 31 seconds faster than week 1 and showed a lot of poise in only the second cross country race of his high school career! Bradley Popler was super aggressive over the first mile and, although he slowed steadily over miles 2 and 3, was still able to run a 5k PR with a 30-second improvement from last week! And finally, Freshman, Nick Kuenkel, acquitted himself well in his first varsity race with a small improvement over his week 1 race! Nick should continue to improve as he gets more varsity experience!

"As close as the varsity team score was, the JV race was exactly the opposite! Cherokee took the top seven places to shut out the other teams with a perfect score of 15 and we had 11 of the first 14 finishers! Joe Natoli ran an excellent race to win by 18 seconds over teammate, Joe Hough, who ran an excellent race of his own! Both Joe's ran as instructed . . . smart over the first mile and focused & tough over the last two! Freshman, Andrew Free also followed those instructions "to a T" and came away with a big PR in 3rd place! Other PR's were set by Julian Hatch in 6th, Luke Reistle in 12th, Nate Meyer in 27th, Jack Delaney in 28th, Nimai Kumar in 30th, and Ethan Weisenberg in 33rd! Other strong performances were turned in by juniors, Lucas Hatch and Kevin Hess, who both improved considerably from week 1 and set course PR's in the process!

"Once again, naming the Runner of the Meet was a tough call! Nico, Dylan, Brett and Patrick stood out in the Varsity race, with Joe N, Joe H, Andrew, Jack and Nimai all in contention from the JV race! After lengthy and serious debate, the coaches selected Patrick Ditmars based on his excellent, focused, tough effort to finish 14th in the Varsity race with a 31 second improvement over week 1! After missing all of his freshman cross country season to injury and losing track to Covid, Patrick is making up for it with a strong start to his sophomore year! GO Patrick!" 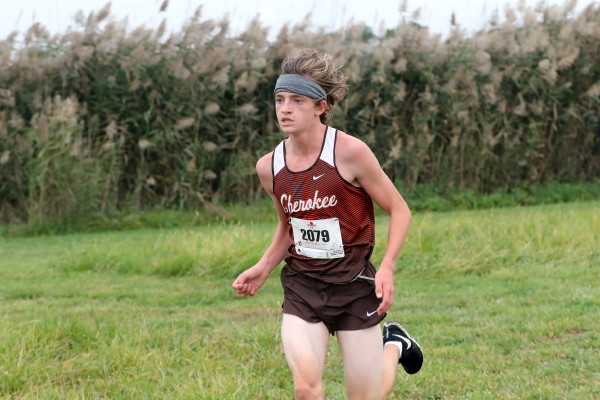 Reuben Frank, of NBC Sports Philadelphia, and writer of the South Jersey Track Coaches Association's blog, From the Backstretch, commented on Nico's race in his blog and it is also available on our server at Nico Grilli runs all-time #5 time at DREAM Park for Cherokee in Olympic Conference Batch Meet!!!.

Offical results from the meet at: NJ.MileSplit.

Jon Falk shot at the finish line and provided the following: 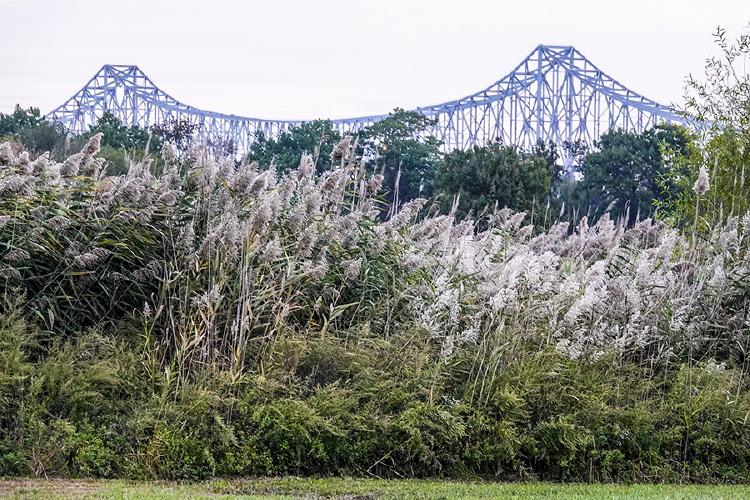 On October 17, 2020, the team returned to DREAM Park for the Olympic Conference Batch Meet # 3! This time the course was very different from earlier visits! It rained heavily on Thursday and then again the night before the meet! That said, the park still drained fairly well! There were few if any HUGE puddles but the entire course was wet, a little muddy and slow!

In a way, that's kinda a shame. Get a bunch of old high school runners together and the races they remember and laugh about the most are the ones run under horrible conditions! Rain, mud, snow, sleet, ice, wind, you name it and that's what they remember first! Yeah, there might have been Sectional, Group or State Championships to remember -- the "Glory Days" of Youth! -- but that fall in the mud at Holmdel that took down four others on the team gets the biggest laugh! But look, the season's not over yet!

"The Phantom" sent the following comments on the meet!

"We went into the 3rd Batch Meet severely shorthanded! We intentionally held out the top six varsity runners to have them train through for the Conference Championship meet next Saturday. On top of that, we had two others - Joe Hough and Jameson Crozier - taking PSATs, and we had Joe Natoli and Mateo Evola out with injuries! So we were running without nine of our top twelve and ten of our top sixteen!

"We ran six athletes in the varsity race. Three were freshmen and four had no previous varsity experience. Despite this, the team was still able to secure a 2nd place finish behind Shawnee (South Jersey's 8th ranked team). Freshman, Nick Kuenkel ran an excellent race, staying with the lead pack and finishing 2nd overall! Our next two finishers were also freshmen - Andrew Free in 6th and Julian Hatch in 8th! Both ran very well but special acknowledgement goes to Julian who PR'd by 24 seconds on a day when the course was wet, muddy and very slow! Rounding out the scoring were Lucas Hatch and Tommy Bromley in 14th and 15th, with Kevin Hess finishing as our 6th man in 19th.

"The JV race went even better as we were able to secure a 1st place team victory led by freshman, Luke Reistle, who won with an excellent race, leading from start to finish! Freshman, Bobby Poplau, still recovering from a toe injury, ran well to finish in 3rd place, and senior, Mylo Barkow, improved his time from last week to finish 4th! Freshmen Nate Meyer and Silas Matteson, both ran excellent races to complete the team scoring with 11th and 12th place finishes! Silas, returning from injury, ran a very poised race in just the first 5K of his high school career! Nate was especially impressive, setting a 35-second PR with his best race of the year by far! Other PR performances were turned-in by freshman, Nimai Kumar, and sophomore, Ethan Weisenberg, both of whom dropped a couple of seconds off of their times from last week despite the slow, wet, muddy conditions.

"Nick Kuenkel, 2nd in the Varsity race; Luke Reistle, the JV winner; along with those who set PR's - Julian Hatch, Nate Meyer, Nimai Kumar and Ethan Weisenberg - were all in contention for Runner of the Meet! In another close contest, the coaches selected Nate Meyer for the honor because of the focused determined way he ran! His 35-second PR, on a course that was running much slower than previously, illustrated just how well he ran! GO NATE! 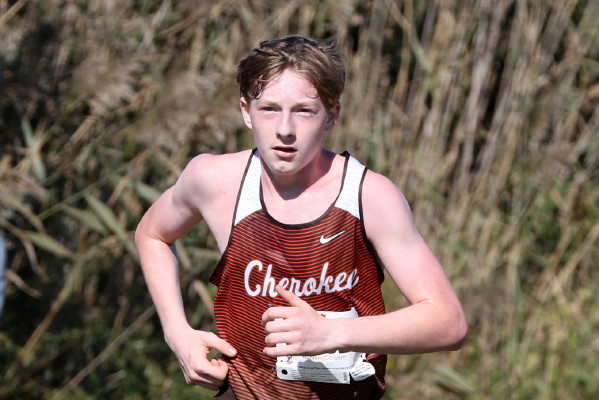 "The team is now focused on the championship season beginning this Saturday with the Olympic Conference Meet at Dream Park!" GO CHEROKEE! 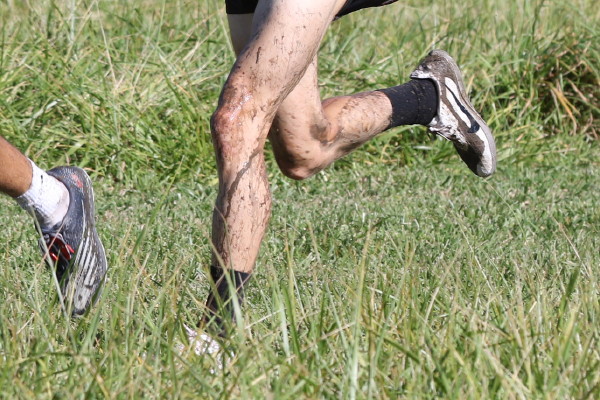