The coaches chose not to fully compete for the South Jersey (Open) Championship and, instead, focused the team's attention on the County and Conference Championships coming up in the next few weeks! Look back on this site for the full history of Cherokee's dominance of the County and you'll understand why it is a "must win" on the schedule! GO CHIEFS!

October 9, 2021, the day of the SJTCA's "South Jersey Open" began well! Though rain threatened and it was windy at DREAM Park, it was one of the cooler days we've had lately and a nice day for a cross country meet!

Indeed, Coach Thompson was seen patting himself on the back for providing such a great opportunity for Cherokee's runners! YOU GO, COACH! ; < ) 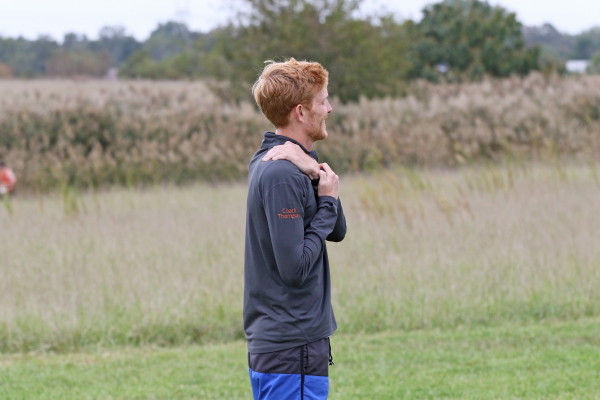 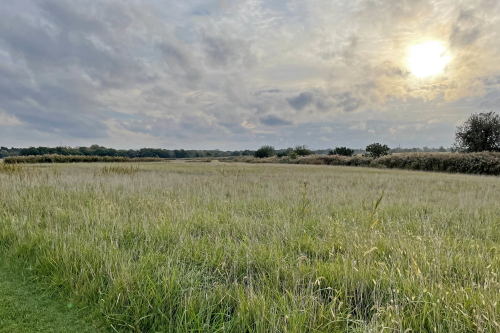 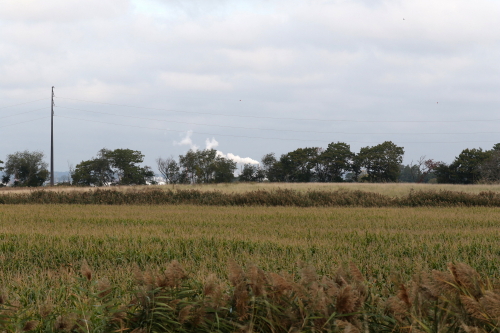 Coach Shaklee made the following comments about the meet:

"The Cherokee team had a good day at the South Jersey Open this past Saturday! Things got off to a fast start with the Freshman race. These new runners have been improving each week and they showed how far they have come with a commanding win with a low score of 33 points! Liam Tindall led the way for the Chiefs with his best race of the season so far, placing 2nd in the field of 78 runners on the 2.4 mile course! Zach Ciabattoni - 8th, Enzo Corona - 10th, Tate Midora - 13th and Ben Weiner - 15th completed the scoring for the team while all running exceptionally well!

"Next up, the Varsity squad, competing without our top six runners, managed to place 4th in a field of 11 teams led by Tommy Bromley, Andrew Free, Jameson Crozier and Ben Hackney who all finished within 9 seconds of each other, sweeping places 18-21! To top it off, Lucas Hatch, Joe Hough and Danny Hassall swept places 29-31! To show the depth of this squad, only one team -- first place, CH East -- had a 7th man faster than Cherokee and only two teams -- East and Southern -- had a 5th man in before Cherokee's 7th!

"Next up, the team will compete in the Burlington County Championships on Friday, October 15th!"


The Freshmen took 1st in their 9-team race, thirteen points ahead of their closest rival, CH East!

Coach Shaklee turned the Varsity racing responsibilities over to Cherokee's second team members and they took 4th in their 11-team race!

In the JV race, Cherokee runners took 3rd in a tightly-packed 1 through 3, 7-team race!

These and other pictures are on the District's Google site.

Coaches and athletes routinely check mile times in a race for a variety of reasons but how many check the available videos and pictures at different points in a race?!

Imagine, three guys from East within 30 meters of you a mile from the finish, two in front, one just behind you . . . but, by the time you get 200 meters of the finish, you've "dusted" two of them and only one is still there, just in front of you!

It's easy to be satisfied, to let that guy beat you -- you've done enough, you think -- but here's where the CHAMPIONS step up!

In those final 200 meters, You beat that kid and three others in front of him . . . and, once again, that night, you stand in front of the mirror: THERE'S A REAL CHAMPION!

(The ones who fail here are the ones who are running along with the same guys at the mile mark, the two mile mark, maybe even 200 meters from the finish. They're not racing, they're just moving along with the crowd, just covering the course! Yes, they're tired . . . sort of. But they don't "hurt!" They don't challenge anyone, including themselves!)

Here's an exercise to help you decide. A mile from the finish line, don't focus on how tired or hurting you are, don't focus on how far you are from the leaders, focus on beating the guy in front of you, and then the guy in front of him! Count how many guys you pass in the last mile (yeah, subtract the ones who pass you!) and applaud your effort! Tell your teammates too, and, if they don't know how many they passed, tell them to get with the program!

In addition, go over the pictures on our Google site and go over the videos and pictures that are often available at NJ.MileSplit! They're a gold mine of information!

On October 13, 2021, the SJTCA announced their team rankings and, once again for Cherokee, nothing changed. Overall, Cherokee did well enough at the SJ Open to hold their position on the South Jersey list, 2nd behind Haddonfield. See SJ Top 20.

Also on October 13, 2021, NJ.MileSplit issued their team rankings for Week 5 and Cherokee remained in 9th place, with Haddonfield the only other SJ team in the Top 10. See NJ Top 20.

On October 15, 2021, the team traveled to the Rancocas Valley H.S. Sports Complex in Easthampton for the Burlington County Open Championships and, while they were fairly confident of success, there was a long history of Cherokee excellence to maintain at "the County Meet," and some injury/illness among the Varsity squad, so there was some concern!

Coach Shaklee took some time on the way home to provide these quick comments on the meet.

"Although the weather conditions were unusually difficult (hot and humid!), the Cherokee Cross Country team turned in a dominating performance at the 2021 Burlington County Open Championships!

"The Junior Varsity Race went off first and the result was very impressive! Eleven of the top twelve finishers were Cherokee runners, led by individual champion, Andrew Free! Behind Andrew, in close succession, were Aiden Dickinson - 2, Joe Hough - 3, Luke Reistle - 4, Lucas Hatch - 5, Matteo Evola - 6, Zach Ciabattoni - 8, Evan Pawlik - 9, Danny Hassall - 10, Josh Pawlik - 11 and Enzo Corona - 12! In addition, a special shout out goes to Freshman, Josh Lowrey, who set a three minute PR on the hot, humid day! The team scored the best-possible 15 points, shutting out the rest of the county!

"The Varsity squad came into the race definitely not at 100%. The coaches were a little worried given that we were without one of our top two runners, Nick Kuenkel, and three others of the top five were not completely healthy! The coaches' concerns were for naught! Led by individual champion, Patrick Ditmars, the team scored a low 25 points to defeat the entire county if they were combined into one team! Behind Patrick, Conor Jacob, Bobby Poplau and Joe Natoli placed 4th, 5th and 6th! Senior Co-Captain, Bradley Popler, ran a very brave, aggressive race, going with the leaders from the start. Although he struggled over the last mile, Bradley still managed to hang on for ninth and complete the scoring for the team! Tommy Bromley and Senior Co-Captain, Jameson Crozier both ran well and definitely contributed to the win! Tommy finished 15th and in front of second place Cinnaminson's second man! Jameson placed 19th and finished in front of Cinnaminson's fourth man! Overall, it was a commanding performance by the Cherokee team as they secured the eighth consecutive Cherokee County Championship and the 22nd Championship in the past 27 years!

"Next up, the team will face the third and fourth ranked teams in South Jersey (Washington Twp & CH East) at the Olympic Conference Championships on October 20th at Dream Park!"

Jim Lambert, formerly Sports Reporter for the Newark Star-Ledger and now with NJ.MileSplit recognized the Cherokee Boys and Girls achievement at the BC Open! His article is at NJ.MileSplit, and it is copied on our server at Jim Lambert on Cherokee's multiple victories.


Coach Shaklee described the JV performance as "very impressive" but that's too subtle! It was FANTASTIC! Eleven out of top twelve! FANTASTIC! It demonstrated the depth and quality of the program and, specifically, the excellence and commitment of the individuals on the team! GO CHEROKEE! 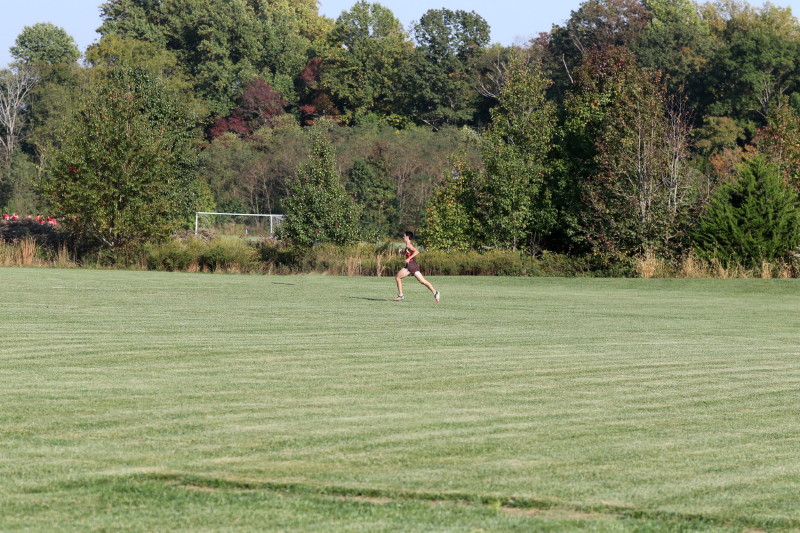 Then there's the Varsity, dealing with injury and illness, everyone had to step-up . . . and STEP-UP they did! Put Cherokee's Varsity up against all of Burlington County (scored individually) and Cherokee wins! GO CHEROKEE! 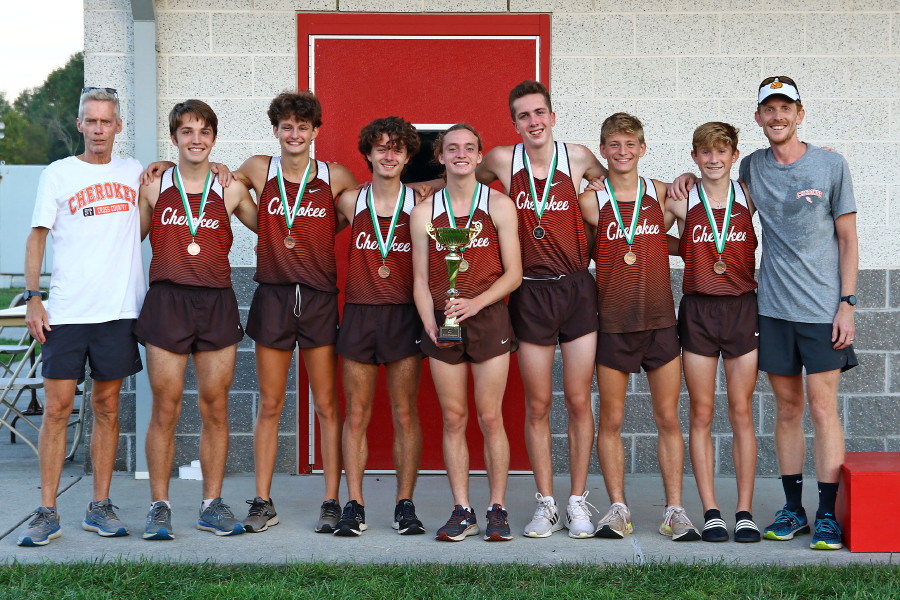 
Return to the index for Cross Country Pictures, 2021