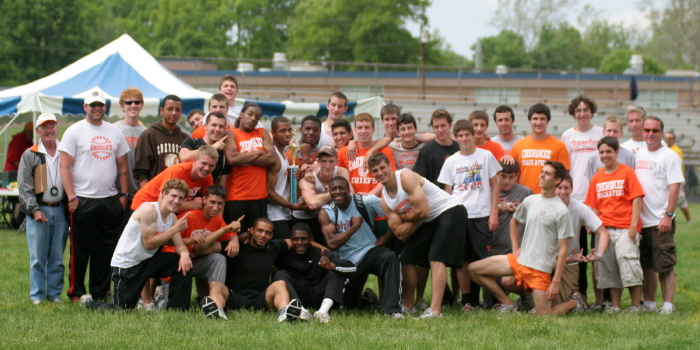 This section will be divided into a number of pages as the Winter and Spring Track seasons progress:

I. Page I includes comments on the Early Winter Season, December, 2008 into January, 2009. It reviews the early meets at the Bennett Athletic Center in Toms River, the New York City Armory, and Howell High School in Farmingdale.

III. Page III includes comments on the Early Spring Season beginning with the scrimmage against Timber Creek and Haddon Heights (April 18th), and an unofficial roadrace in Haddonfield run by some members of the distance squad (April 21st). The official season begins with a dual meet against Washington Township HS (April 1st); followed by the Burlington County Hall of Fame Meet (Apr 4th) and the Moorestown Invitational (April 11th). After that, part of the team will compete in the Highland Frosh/Soph Meet (April 13th), and the entire team will return to action in a double-dual against Pennsauken HS and Cherry Hill HS East (April 16th). Finally, on the following day, a segment of the team is scheduled at the Crusader Frosh/Novice Meet (April 17th).

IV. Page IV includes comments on the Late Spring Season beginning with the Penn Relays (April 25th); the dual meet against Eastern Regional High School (April 28th); the South Jersey Invitational (April 30th) and the South Jersey Relays (May 2nd); the dual meet against Lenape (postponed until May 26th); the Lenape District Championships (May 7th); and the Cherokee Invitational (May 12th).

VI. Page VI Includes comments on the Late Championship Season starting with the South Jersey Group IV (Sectional) Championships (May 22nd and 23rd) and the State Group IV Championships (May 29th and 30th), both at Egg Harbor Township HS; the dual meet against Lenape (postponed earlier, May 26th); and the State Meet of Champions (June 3rd) at South Plainfield HS. After that, there is a section on the annual Track Party where team members, parents, friends and coaches enjoy a final meal together and review the accomplishments of the year. Finally, there are comments on post-season meets, including the Haddonfield Elite Meet (June 11th) and the Nike Outdoor Nationals (June 18-20th).