The weather stays cold and nasty -- makes some wonder about "global warming!" -- but training, both indoors and outdoors, continues. That's what "the indoor season" is all about . . . base and strength training for the distance athletes, and skills and conditioning for the sprinters, jumpers and throwers . . . and a number of meets to change things around and to check on how things are going. GO CHEROKEE!

On January 12th, 2015, several members of the team returned to the Bennett Center for the South Jersey Track Coaches Association Meet # 5 to continue their practicing. Not much to report but several PR's were recorded! Cam Rabinowitz set a new PR and finished 2nd in his heat of the 800m; while Cam Wilburn, in his first race back from injury, won his heat of the 800m! In addition, two Freshman in the 1600m ran well. Brian Cackowski PR'd and beat his time from the Armory Meet by 8 seconds; and Matt Natale, in his first ever 1600m, finished 7th out of 18 runners in his heat!

Finally, in what appears to be a recording mistake or a grievious example of what can happen when you lose a bet, Brendan Falzone is reported in the 55m results as finishing last in 8.49! Our crack team of investigative reporters looked into this report and it appears to be a technical error. Still, Brendan in the 55m is good for a chuckle, isn't it?! GO BRENDAN!

No pictures are available from this meet but here are some details at: NJRunners/MileSplit.

On January 16th, 2015, several of Cherokee's top Varsity runners and throwers traveled that beaten path to the Bennett Center for the NJSIAA Group IV Relay Championships. At one point, the biggest excitement from the meet appeared to be the possibility of the bubble collapsing during the meet but even that was short-lived! Soon, however, Cherokee's athletes made some positive strides!

The Distance Medley Relay team of Mike Zurzolo in the 1200m, Robbie Curley in the 400m, Ty Kurzawa in the 800m, and Nick Falk in the 1600m placed 22nd in the field of 47 teams; and the 4 X 800m Relay team of The 4 X 800m team of Mike Zurzolo, Nick Falk, Cam Rabinowitz and Justin DeTone finished 21st in the 42 team field with new 800 PR's established by Rabinowitz and DeTone! In addition, the Sprint Medley team of Matt Powell in the 400m, Marc Woodard and Dalton Hopkins in the 200m's, and Ty Kurzawa anchoring in the 800m in a dramatic fashion, won their heat and finished 11th out of 44 teams!

Finally, on the track, in another of the more exciting races of the evening, the 4 X 200m team of Marc Woodard, Dalton Hopkins, Robbie Curley and Matt Powell had a great one going and a top finish when a Toms River North runner knocked the baton out of Matt Powell's hand on the anchor carry! "Coulda, woulda, shoulda" but they did have a nice race going!

In the Field, John Hemple and Dante Massimano both set new PR's in the Shot Put!

On January 22nd, 2015, Cherokee hosted the South Jersey Throwdown # 2 and many of our athletes continued to improve!

Ryan Schmukler had a huge day with a three foot PR and placed 4th in the JV Division, and John Hemple had a two and a half foot PR to finished 4th in the Varsity Division! Other PRs included Jim Morretti, George Coulter and Andrew Kim, all with two feet PR's; and Dagan Massimino, Sheldon Johnson, Ryan Bubnoski, Jack Chen, and Bill Weissman!

On January 29th, 2015, Cherokee hosted the South Jersey Throwdown # 3 and it was a good exercise for all! In the competition, Andrew Kim was the most impressive with a big two-foot PR, while Bill Weismann, Jim Moretti, Adonis Giovetis and Ryan Bubnoski threw their own PR's! Lastly, Drew Jackson placed third in the JV competition. (Not sure how Coach Cal, the tie-wearing Shot Catcher, and Dalton "Nice Hat" Hopkins made the cut!)

On January 30th, 2015, the best of the Varsity returned to the Bennett Center for the NJSIAA South Jersey Group IV Sectional Championships. They returned with one Sectional Champion and several athletes who set new PR's! Marc Woodard, in his first hurdle race of the season, won the SJ Group IV Championship in the 55 HH! Woodard also qualified first for the final of the 55 Meter Dash but slipped at the start, due to a track surface problem and the prohibition of starting blocks and spikes exceeding 1/8 inch, and finished 8th.

In the distance events, Nick Falk placed 4th in the 3200m despite the fact that his shoe came untied 3 laps into the race. The coach reported that he has scheduled shoe-tying techniques at practice next week. Nick's younger brother has been invited as an expert in the area. Jack Shea ran a strong race to finish 7th and just miss a trip to the state meet, while Justin Kelly won the first heat of the 3200m with an impressive homestretch kick!

In the 800m, Ty Kurzawa had his best race of the season, finishing 2nd in his heat and 8th overall!

Finally, in the 1600m, Mike Zurzolo ran a very well-executed race to top his PR from last spring and finish 11th out of 41 runners; and Steve Gravlin finished 2nd in his heat with his best time of the season by over 10 seconds!

In the Field, John Hemple placed 5th in the Shot Put, with a toss just 1/2 inch off his personal best, to advance to the state meet while Dante Massimino PR'd by 10 inches for 16th in a field of 38!

On pictures, Dante Massimino got ripped because, as the photographer moved from the Bubble to the Middle School, he mis-timed Dante's turn in the circle. His pictures are from his warm-ups! Justin Kelly got more than usual because anyone who saw him charging past the leaders (on the inside, no less) in the final 50 meters of the 1600m had to smile and appreciate his victory!

On February 6th, 2015, Marc Woodard proved once again that he's not "just another pretty face!" Used to competition, Woodard showed-up for and won the "Mr Cherokee" contest at school! The competition included a dance number that received a great response from the standing-room-only audience! Let's hope he generates the same excitement at the Group States this weekend!

Our photographer was unavailable but here are some pics from the Cherokee website. 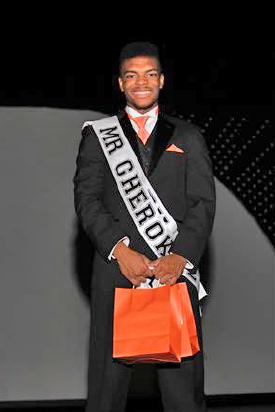 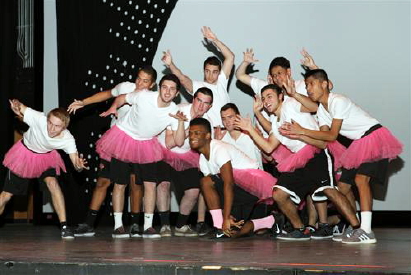 On February 10th, 2015, Cherokee hosted the South Jersey Throwdown # 4 and got plenty of exercise and a few PR's as well! In the competition, Andrew Kim, Bill Weissmann, Sheldon Johnson and Dagan Massimino threw PR's! But, remember, everyone is working on skills/technique, so throwing PR's is great but not the final goal here in the Winter. In the long run, learning to "put" the shot properly will make throwing repeated PR's a lot easier in the Spring! Hang in there, guys!

On February 15, 2015, Cherokee's three qualifiers from the South Jersey Sectional Championship advanced to the NJSIAA Group IV State Championships at the Bennett Center in Toms River! One did especially well but the other two will have to wait until the Spring to reach that level of competition again. Hurdler Marc Woodard, aka. Mr. Cherokee, competed in the 55m High Hurdles and, after qualifying 5th in 7.89, he stepped-up in the Finals and took second in 7.84! As a result, he qualified for the up-coming Indoor Meet of Champions!

Neither Nick Falk nor John Hemple managed to meet the standards they set for themselves at Sectionals and neither advanced. They got there -- meaning Groups States -- though and this speaks well for their chances in the Spring!

Our photographer was unavailable but here is a picture taken by someone there. We're digging for others.

McFarland, USA is supposed to be a true story but, in the movie, we hear one of the Cross Country guys is dating the Homecoming Queen . . . how likely is that?!

Response from team lawyer: "Hey, it could happen! Maybe . . . maybe in some kind of weird parallel universe where everything is reversed." 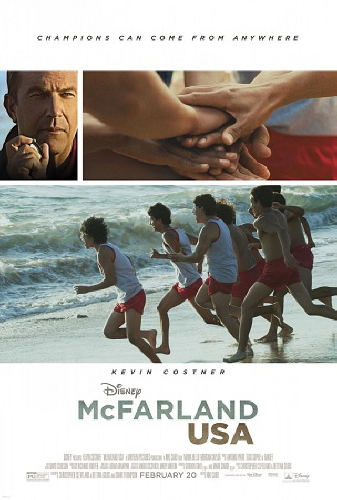 On February 21, 2015, Cherokee's loan qualifier from the State Group Championships returned to the Bennett Center for the NJSIAA Indoor Meet of Champions. Marc Woodard advanced after taking 2nd last weekend at Groups in 7.84 but he finished 17th at the MOC in a relatively slow 7.94. It's amazing how fast the race is and how only 1/10th of a second can move you far back in the standings! For example, had Marc run the 7.84 he ran last week, he would have finished 6th in the finals! The pictures are edited versions of Aaron Las' pictures from NJRunner. Further details at: NJRunners/MileSplit.