April is in our rear-view mirrors but, until just a few days ago, we wondered if Spring was actually going to make an appearance here in South Jersey! This was strongly reinforced by temperatures in the low 40s on May 1st at Holmdel's "Night of 3200's"! But that's over now and South Jersey appears to have skipped the spring season and moved quickly into summer! "Sunscreen" and "hydration" are the watch words from now on! That and . . . GO CHEROKEE!

On the evening of May 7, 2015, Cherokee defeated district rivals Lenape, Shawnee and Seneca High Schools in the 9th Annual Lenape District Track and Field Championship and, for the 7th time in the nine year history of the event, took home the Lenape District Cup!

Leading the way for the Chiefs was senior, Marc Woodard who won the Long Jump and 200m Dash, placed 2nd in the High Hurdles, and teamed with Rob Curley, Matt Powell and Daulton Hopkins to win the 4 X 100m Relay! Other winning efforts were turned in by Nick Falk, who along with Justin DeTone took the top two spots in the 1600m Run, with DeTone hitting a new PR and Mike Zarzolo following in 4th with his own PR; Jack Shea, Justin Kelly and Justin DeTone ran away from the rest of the field to take the top three spots in the 3200m Run; and Brandon Marks, Matt Smith and Noah Gil swept the 5000m Run! The Freshman, Marks, did a great job of pacing the 5K, clicking off steady laps to help pull Freshman teammate, Smith, to his first sub-18 minute clocking!

The 800m Run was unusual because both Nick Falk and Mike Zarzolo came back and PR'd in the event, despite having Nick get tangled up with Ty Kurzawa on the backstretch! Zarzolo took 2nd and Falk finished 4th, while Kurzawa was forced to drop out of the race.

Other top performances were turned in by Ty Kurzawa, 3rd in the 400m Dash; Dave Osterhout and Al Panaccio, 4th and 5th in the 400m IH: Kevin Milligan-Tinker, Rob Curley, Ty Kurzawa and Matt Powell, 2nd in the 4 X 400 Meter Relay; Marc Kirby, 2nd in the Triple Jump with a nice PR; John Hemple, 2nd in the Shot Put with a 2-foot PR, Dante Massmino 5th in the Shot Put, and Ryan Razler 5th in the Discus; Matt Gross and Adonis Giovetis, 3rd and 4th in the Javelin with Adonis throwing a 4-foot PR; and Cam Wilburn, Cam Rabinowitz, Brendan Falzone and Steve Gravlin, 2nd in the 4 X 800m Relay with the first three setting new PR's! 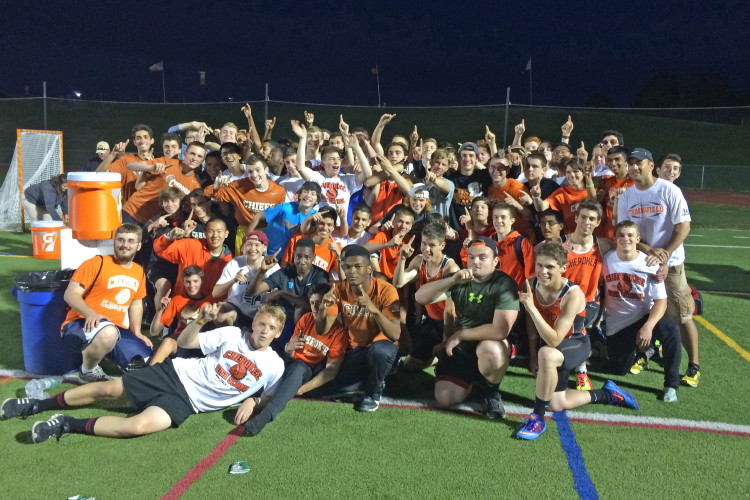 On May 11, 2015, Cherokee hosted the Cherokee Track and Field Invitational, a meet designed for Freshmen and Novices not likely to compete in the up-coming Sectional Championships. This year's event was probably the largest of its kind in New Jersey with almost 1700 throws, jumps and races listed in the results!

Cherokee had lots of positive results! In the Field, Adonis Giovetis was the lone medal winner as he placed 5th in the Javelin, and Dante Casella threw a significant 3-foot PR in the same event! Also, Marc Bannerman and Dagan Massmino both "put" major PR's in the Shot!

On the Track, the distance squad used the meet as a training opportunity and they had 14 of 18 PR's in the 800m, led by Brendan Falzone's 3rd place finish! Brandon Marks, competing in his first 800m, ran very well to finish 10th overall in a field of 92! Matt Smith dipped under 2:20 for the first time. In addition, big chunks of time were taken off by Joe Falk, Pat Mahoney, Pritesh Prajapati, Jon Conn, Nick DiCostanzo and Ben Rosenberg who all improved by anywhere from 5 to 10 seconds! In the 4 X 400m Relay, Brandon Marks dropped under 60 for the first time, while Brendan Falzone, Josh Annandsingh, Nik Kadirisani, Jon Conn, Ben Rosenberg and Taha Rana all PR'd!

Many Cherokee sprinters had a nice day too! Freshman Sebastian Graterol clocked the fastest Cherokee 100m Dash and a PR, and Matt Dawkins, Eric Jjemba, Dharam Patel also had PR's in that event! Naledge Brown ran his own PR in the 800m; and Dave Osterhout just missed a PR in the 400IH and became the only Cherokee athlete to win an event! That said, probably Freshman Colton Schneeweis had the best night when he broke 60.0 in his first-ever 400m Dash and set another PR in the Pole Vault!

On May 13, 2015, a number of Cherokee's elites traveled to Washington Township High School for the Olympic Conference Championship. In the 4 X 800m Relay, the team finished 3rd with a PR lead-off leg by Nick Falk and a strong second leg by Ty Kurzawa, who came back later to finish 7th in the 400m Dash. In addition, Jack Shea finished 6th in the 1600m Run with a fast finish!

In other areas, John Hemple provided a nice highlight as he took 3rd in the Shot Put and became the first Cherokee putter to make 1st Team All-Conference since 2005! Interestingly, the last thrower to make 1st Team All-Conference was Tom Nessler, who also took 8th in that year's Meet of Champions, and whose brother Mike Nessler is a Freshman Thrower on the team this year! In addition, jumpers Sam Kramer and Mark Kirby tied their PR's in the High Jump and Pole Vault respectively. Finally, the team's sprinters had a tough outing with the 4 X 100m Relay team of Rob Curley, Matt Powell, Daulton Hopkins and Marc Woodard finishing 5th in the event; Woodard finishing 7th in his speciality, the 110HH; and Curley and Hopkins (plus Andrew Thompson and Terrance Graves) finishing "out of the money" in both the 100m and 200m Dashes!

On May 14, 2015, the distance squad traveled to Holmdel High School for the second in a series of high-octane racing events, this one, A Night of 1600's. Not entirely expected, it was another incredible . . . stunning . . . stunningly awesome night for the guys! YOU GO CHEROKEE!

Twenty of twenty-four runners set new PR's . . . and some by large margins! Of the twenty, twelve improved by 10 seconds or more and four of those were by 20 seconds or more: Joe Falk, Jon Conn, Matt Zeitz and Nick DiCostanzo! Justin DeTone and Mike Zurzolo became just the 28th and 29th runners in school history to break 4:30! Mike slipped in as the 29th fastest while Justin moved all the way up to 13th on the school list!

Heat 16's fast finish was impressive with sophomore, Brendan Falzone, and freshmen, Brandon Marks and Justin Kelly, all finishing within 1/2 second of each other with big PR's, just missing going under the 4:40 mark! In addition, Cherokee had two new additions to the sub-5 club in Heat 13 with sophomore, Cam Wilburn and freshman, Mike Iannotta both going well under; and one new addition to the sub-6 club as Nick DiCostanzo dropped 20 seconds to go under for the first time while winning his heat! 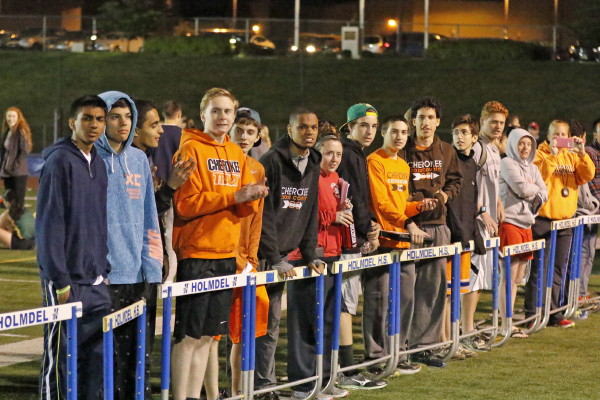 On May 16, 2015, the team traveled to nearby Maple Shade High School for the Burlington County Open, the oldest meet in South Jersey dating back to 1929. The team finished 4th behind three top-ranked teams in South Jersey and several athletes set new PR's or scored big points for the team!

Dave Osterhout, Daulton Hopkins, Ty Kurzawa, Phil Quipot and Rob Curley all set PR's in different events: Dave in the 110m High Hurdles, Daulton in the 100m Dash, Ty in the 800m Run, Phil in the Shot, and Rob in the 200m Dash! But the day went to Justin DeTone and Marc Woodard who won their individual races and became County Champs! Justin became the 5th Cherokee boy to win the 1600m at this meet, and Marc outdid him by setting PR's in both the Trials and Finals of the 100m Dash and then setting a third PR on his way to winning the 200m Dash! For the record, Marc is only the 2nd guy from Cherokee to win the 200m at the BC Open, behind school record-holder Will Rapp in 2009!

Besides these two wins, Rob Curley, Matt Powell, Daulton Hopkins and Marc Woodard teamed for 2nd and a season-best in the 4 X 100m Relay! This was the fastest Cherokee 4 X 100m Relay since the team of Kevin Merrigan, Niraj Patel, Chris Steliga, and Will Rapp set the Cherokee school record in 2008! In addition, Mike Zurzolo took 2nd in the 1600m Run; Ty Kurzawa took 6th in a very fast 800m; and Nick Falk and Jack Shea took 3rd and 4th in the 3200m Run!

On May 20, 2015, almost all the distance guys competed at Haddonfield Memorial High School in their annual Haddonfield Distance Night, a last-chance opportunity for athletes not bound for State Sectionals to set season PR's and for those going to Sectionals to "sharpen" for their upcoming races! For Cherokee, it appeared to be a good night to run the 800m but not the longer races (the exception being Pritesh Prajapati)!

In the Freshman 800m, Naldedge Brown placed 5th with a new PR, and Brian Cackowski PR'd in the same race! In the Open 800m, Dave Osterhout and Al Panaccio, running the 800m for the first time since last year's Haddonfield meet, both ran sizable PR's! In addition, Joey Thompson knocked two seconds off of his previous best and Mike Algarra broke 2:20 for the first time!

In the Freshman 1600m, Mike Iannotta placed 2nd with another sub-5:00 effort! The only PR in the Open 1600m came from Josh Annandsingh who knocked a second off of his previous best.

On one of our first warm, humid nights, most of the participants in the 3200m struggled. However, Pritesh Prajapati proved himself to be an excellent warm weather runner as he knocked a whopping 41 seconds off of his previous best time! GO PRE!