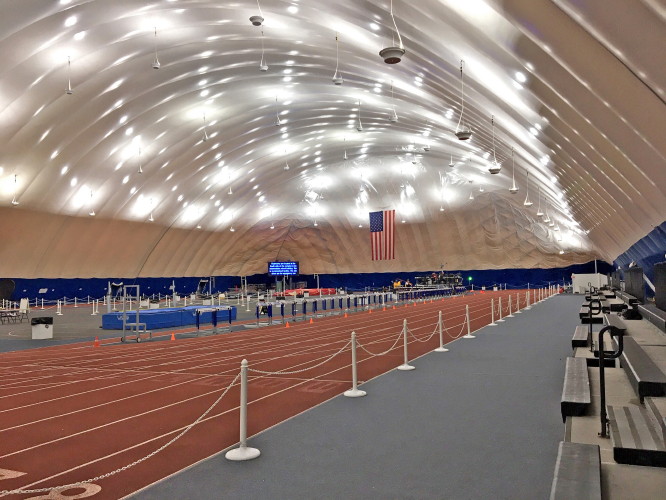 Last year, the season began unpleasantly with record cold days and some early snow but this year it has been much better! Lots of days when it has been relatively warm and outdoor training is doable! As usual, the distance guys got out and ran, focusing on base and strength training, while the throwers, jumpers and sprinters found warmer corners of the campus to work on skills and conditioning, and all looked forward to indoor meets to check on how things were progressing. GO CHIEFS!

On January 22nd, 2020, many of Cherokee's younger team members returned to the Bennett Athletic Complex for the South Jersey Track Coaches Association Winter Meet # 8. Unlike many other meets, except for one Varsity 3200m Run, all the events here were specifically for Freshman and Novice competitors!

Winter volunteer Coach Shaklee was unable to attend the meet but he received reports from the coaches who attended as well as the distance athletes who competed. He sent the following:

"The three guys in the 3200m ran well for much of the race but seemed to lose focus with a half mile to go. Still, for the first 3200m of the year, it was a pretty good effort! Bryan Lafferty was only a couple of seconds off of his PR from last spring and Bradley Popler ran 40 seconds faster than his best from last spring! Joe Natoli did not run track last year but he ran a competitive race, taking the lead at times, for his first ever 3200m!

"The three freshmen in the 800m - Ben Hackney, Dennis Golembiewski and Ethan Weisenberg - were all running their first high school track races. They now have a baseline and something they can look to improve on the next time out!

"Jameson Crozier started and finished well in the 1600! He lost his focus a bit through the middle which is something he will improve on with more racing experience. His time was only 2 seconds off of his best from last spring, so it is a good starting point for this year! Of course, we could not get through a meet without an official miscounting laps! Danny Hassall, running in his first high school track race, was the victim this time. Danny was signaled to continue as he came through to end the 8th lap and he proceeded on to set a new PR in the rarely contested 1800m Run!" GO DANNY! ; < )

The official results are at NJ.MileSplit.

Our photographer, RunningWorksPics, did OK in the "dark hole" and, as part of his duties, he selected the Save of the Day by Vincent Tonzello as he almost kissed the track in the 55m High Hurdles! Phew! GO VINCENT!

On January 25th, 2020, the team returned to the Bennett Athletic Complex for the South Jersey Track Coaches Association Winter Meet # 9 and returned with a number of successes!

Going for his own record, winter volunteer Coach Shaklee beat our photographer's postings with his quick "distance" summary of the meet!

"The distance crew had a good day on Saturday at the SJTCA meet at the Bennett Athletic Complex! Ethan Wechsler and Chase Miller started things off in the 1600m Run, finishing 1st and 3rd! Ethan took the lead from the start and got faster as the race went on, eventually finishing 8 seconds in front of the 2nd place finisher! He then doubled back in the 800m to place 2nd behind teammate, Tyler Jackson, with a strong last lap! Tyler led from start to finish to get the win by 2 seconds!

"In the 3200m, Brett Shea ran a tough race to finish 3rd with a 6 second PR! After doing much of the work, leading the chase pack, Brett was still able to summon a nice finishing kick to pass one runner in the last lap and gain on the second place finisher!"

The official results are at NJ.MileSplit.

A few days ago, our photographer selected the "Save of the Day" award winner but this week the award winner has to be the "Safe at Home Plate" award! Kevin Hess took first place for his spectacular finish of the first leg of the 4 X 400m Relay! There are some pictures of his baton pass and a suggestion of what might soon happen -- he's wobbling a bit but many athletes are unstable in the pass -- but no actual pictures of Kevin's aerial display in the exchange zone. Our photographer reported, "I'm shooting the exchange through the lens with my right eye but I keep my left eye open for athletes who might run into me! The Cherokee exchange looks good but soon afterwards, through my left eye, I see Kevin somesault through the air and land on his butt: "safe at home plate!" Really, a full somersault! Dude looked like a Ferris Wheel! Yikes!" GO KEVIN! FLY, KEVIN, FLY!

On January 28th, 2020, winter volunteer Coach Shaklee took a group of eleven distance runners to the Bubble for the Toms River Frosh/Novice Meet and competed exclusively in the 1600m Run.

The coach sent these comments:

"The idea was to run one event -- the 1600 -- and get back to school at a reasonable hour. Mission accomplished!

"Things started well in the Freshman 1600m event where all six runners ran faster than the seed time entered by the coach . . . and five of the six were running their first 1600 of the year! In the seeded heat, Tommy Bromley got an aggressive start, held on decently through the middle and closed well to finish 4th (only a second behind the leader) with an 11-second improvement from his best time last spring! Patrick Ditmars was not far behind him and not far off his all-time best, placing 6th in the 4-heat field of 68 runners! He accomplished this despite running in lanes 2 and 3 for just about the entire race! Ben Hackney started conservatively but got faster as the race went on and moved up to place 7th in Heat 2 and 23rd overall! Danny Hassall ran in Heat 3 and decided to only go 8 laps this time! He was rewarded with a new PR! Dennis Glembiewski ran a 10-second negative split in Heat 4 to take 4th in the heat! Behind him, Ethan Weisenberg, running only the second race of his life, ran a solid effort to establish his first 1600 PR, one to work on as the year progresses!

The Novice 1600m did not go quite as well. Bryan Lafferty led the group by placing 9th overall in a field of 89 with a time about 7 seconds off his best spring track performance. Joe Natoli, 16th; Bradley Popler, 22nd; Jameson Crozier, 25th; and Aiden Dickinson, 48th, all ran okay but will benefit from some more race experience and should show much improvement by the spring season!

An interesting point not mentioned by Coach Shaklee was the finish in the Freshman race: Tommy Bromley took a very close 4th to three Freshmen from Highland High School! That suggests a four-year challenge for our Freshmen from one of the best-coached schools in the region! Oh Baby!

Our photographer was indisposed -- the wimp claimed he ate a bowl of Stouffer's Wonton Soup and came down with Coronavirus -- and he was unavailable for the meet.

On January 30th, 2020, Cherokee hosted another of three shot put meets at the school, the Cherokee Thrown Down # 2.

On February 3, 2020, Cherokee Track and Field had a busy night as the team split between two competition sites: the Varsity Classic at the famous Armory Track and Field Center in New York City; and the South Jersey Track Coaches Association Winter Meet # 12 at the infamous Bennett Center in Toms River!

Winter volunteer Coach Shaklee took a group largely made up of distance runners to compete on the famous banked track at The Armory. For decades, the elite from the running world set many world records at The Armory and, despite the inconvenient location of the place, every serious runner wants a chance to compete there!

Head Coach Petruzzi took a larger and more diverse group to the Bennett Center which is as convenient as the local WAWA compared to The Armory in New York's Spanish Harlem!

Coach Shaklee made some comments about the distance squad at both venues:

"The distance team split up on Monday, February 3rd with some runners heading back to The Bubble in Toms River and another group making the trek to the Armory track in New York City.

"At The Bubble, things started with the 3200m where Jameson Crozier and Aiden Dickinson were running the event for the first time. The takeaway is a need to work on concentration through the second half of the race, something to be aware of in their next outing! In the 800, Ben Hackney, Danny Hassal and Ethan Weisenberg each set new PR's, although it was Danny's first go at the event! Ben, did especially well, knocking 7 seconds off of his time from a couple weeks ago! Last up was the 1600m where, once again, all three athletes - Joe Natoli, Bradley Popler and Dennis Glembiewski - set new PR's! Most impressive among them was Joe Natoli who not only PR'd but dipped under 5 minutes for the first time!

"At the Armory in New York, Brett Shea got things started off nicely with a PR of his own in the 3200m Run and a 5th place finish! The Distance Medley Relay was up next and the team of Chase Miller - 1200, Kevin Hess - 400, Tyler Jackson - 800 and Ethan Wechsler - 1600 ran a pretty fast 10:28 to finish 4th in a very competitive field! Bryan Lafferty ran the 800m Run recording a time slightly faster than his previous outing this winter. Wechsler, Miller and Jackson then doubled back in the 4 X 800m Relay, joined by Lucas Hatch who ran a PR split on the 3rd leg as the team finished 9th. The final event for the distance team was the 1600m Run where no PR's were set but credible races were run by Mike Gavio (just returning from a week off due to wisdom teeth surgery), Tommy Bromley and Patrick Ditmars. Patrick's time was a second and a half improvement over his time from a week earlier and not too far behind his outdoor PR! Tommy was less than a second off of his previous best from last week."

Reuben Frank, of NBC Sports Philadelphia, and writer of the South Jersey Track Coaches Association's blog, From the Backstretch, commented on the performance of the team's DMR! It is also available on our server at Cherokee runs fastest indoor DMR by Burlington County school in 18 years at the Armory!!!.

Our photographer went up to The Armory for "old times' sake" and here are some of what he shot: 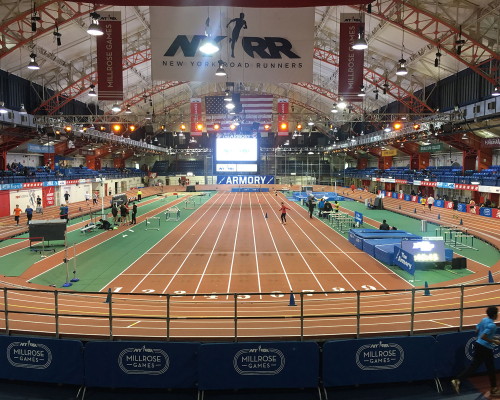 Return to the index for Cherokee Track & Field Pictures, 2020.