Mid-January, the coldest period in South Jersey weather, but training and competition continue!

On January 15, 2022, the South Jersey Track Coaches Association set-up the SJTCA Winter Meet # 7, an event specifically limited to "Novice" runners and it's amazing how many teams have Senior "novices" on their teams!

That said, Coach Shaklee sent a legitimate team of young Distance runners to the meet and he had this to say about their performances:

"The Cherokee distance runners had a very nice outing at the SJTCA Novice Meet on January 19th!

"In the 800, the meet's first event, three Freshmen, Enzo Corona, Anthony DiBatista and Tyler Newton were all competing, along with Sophomore Nimai Kumar from the long sprinter group. With no seed time, Nimai was in Heat 2 and he finished 2nd in the heat and 31st overall (out of 75 competitors) with a 2:29.75 clocking! Tyler Newton was up next in Heat 3 and recorded a 2:46.42 PR! In Heat 4, Anthony DiBatista, knocked 4 seconds off his previous best with his 2:30.94 to finish 10th in his heat and 34th overall! Finally, running in Heat 5, the seeded heat, Enzo Corona, set a new PR of 2:21.28 to place 8th in his heat and 11th overall! By the way, he was the first Freshman to finish the race!

"In the 1600, Freshman, Ben Weiner, was up first in heat 3. Running the first 1600 of his high school career, Ben came through with a nice effort to place 6th in his heat and 30th overall (82 competitors) in 5:27.85! Junior, Ethan Weisenberg, was up next in Heat 4 and he had an excellent race, knocking 22 seconds off of his best time from last spring track season to finish 5th in his heat and 21st overall! In Heat 5, the seeded heat, the field included some varsity runners from other teams which didn't exactly seem right in a novice meet. Despite that fact, both Freshman, Liam Tindall and Junior, Danny Hassall ran very well! Liam broke 5:00 in the first 1600 of his high school career! His time of 4:59.65 placed him 7th in the field of 82! Right behind him, Danny finished 8th, just missing the elusive sub-5:00 goal with his time of 5:00.07. Still, that was over a 9-second PR and he is sure to get under 5:00 in the very near future!"

No coaches' comments but, according to the limited results on NJ.MileSplit, several Sprinters were involved in the meet.

On January 24, 2022, The SJTCA sponsored another in a series of meets at The Bubble: the SJTCA Meet # 9 and there were several interesting results from the Cherokee team!

Winter Volunteer Coach Shaklee, is taking a week or so down south to enjoy his retirement status, so we have to depend on the official NJ.MileSplit results for a glimpse of what happened.

Perhaps the most intriguing when you open the meet page is the first event: the 400m Dash! Skimming down, looking for the usual suspects, Distance runner Patrick Ditmars is listed in 3rd/60 overall in 53.85! Hmmmm. "Distance runner?" That's his first official 400m Dash and a PR! Following Patrick on the list is long-Sprint specialist, Lucas Hatch, 11th/60 overall in 55.55! He's been down to 53.09 but we'll take that now!

Finally, among the Jumpers, in the High Jump, Antonio Campbell cleared a modest 5' 2" and took 11th/16 overall; and Chris Martin managed on 5' 0" and finished 16th/16 overall! In the Pole Vault, Steve Trombetta cleared only 7' and took 7th/9 overall.

No photographs or videos were taken at this meet.

On January 25, 2022, the throws team hosted the Cherokee Throws Meet # 2 (# 1 canceled because of COVID) and, besdies an insanely good throw by a Delsea putter, several members of Cherokee's team set personal records!

In the JV competition, Sophomore Anthony Maszlanka set a major - almost 6' - PR of 32' 2" and finished 14th/40 overall; and another Sophomore, Shane Sloan, put 30' 0", an improvement over recent throws but not a PR, and finished 21st/40 overall.

In the Varsity competition, Senior Adam Lopez put the Shot 39' 05", a small PR and annoyingly short of the 40' early-goal standard, and finished 17th/31 overall.

Our photographer shot the meet, despite the relative darkness in the cafeteria and gym. Here are a few. These and others are available on the District's Google site.

~~ Beware of "Friends" and Internet Scams ~~

We're told Winter Volunteer Coach Shaklee took the advice of XC Ass't Coach Thompson and, using the Internet, signed-up for a B & B in Florida: a streamlined sailing ship, with a crew of three, capable of sailing along the east and west coasts of Florida! "It's the most beautiful and fastest schooner I've ever seen . . . all the comforts of home," said Coach Thompson, and, despite not having seen even a picture of the ship, Coach Shaklee registered for a week on the vessel!

Today, January 25th, in Florida, the coach sent this picture of the boat to Coach Thompson -- it's named "Send Help!" and that should have been a hint to all concerned -- asking if this was the vessel he recommended?

No answer from Coach Thompson yet!

We're told one investigator on the case said this may be part of Coach Thompson's years-long diabolical plan to replace Coach Shaklee as the Head Coach of Cross Country and he already has a tombstone carved: . . ."lost at sea!" 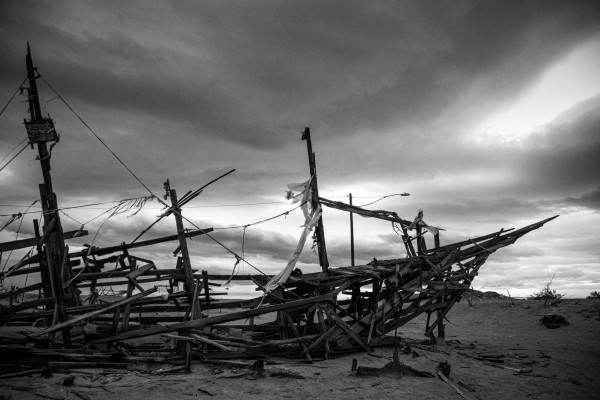 On January 30, 2022, when we first saw these pictures we thought they were indoor shots of Coach Shaklee's Florida B & B but, digging deeper, we realized they were pictures of "The Bubble," looking not so bubble-like! Apparently, over a foot of snow can be "deflating" in many ways!

Did you ever come off that last turn with about six guys passing you and think the finish line looked like this?

At least the Port-A-Pots are safe! 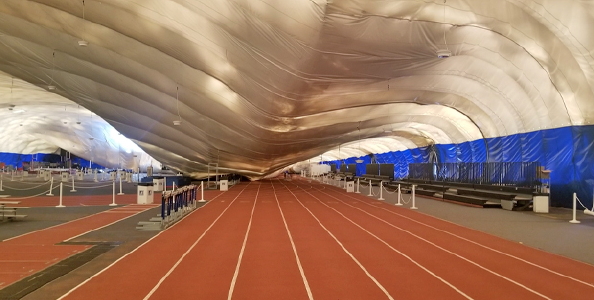 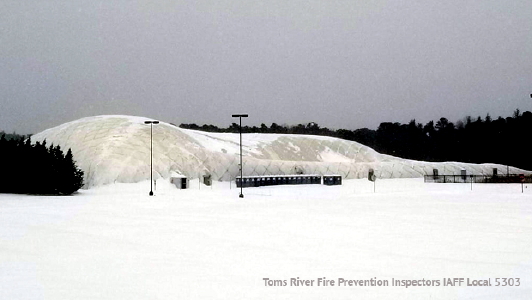 Yikes, Mama, our photographer and web-editor has been so overstretched this week that he has fallen behind on everything: Cherokee Throws on Tuesday, Haddonfield Dual on Wednesday, Sectionals on Friday! Oh Mama!

Think of him as a marathoner, and not an Ethiopian marathoner . . . maybe an old Indonesian!

On February 8, 2022, Cherokee hosted another in the series, Cherokee Throws Meet # 3 and it was a well-run, well-attended affair.

Several of Cherokee's Shot Putters participated. On the Varsity level, Senior Adam Lopez put the Shot a disappointing 36' 11" and finished 28th/38 overall when he was hoping to break the 40' "barrier." On the Junior Varsity level, Sophomore Anthony Maszlanka put the Shot 31' 10", only 4" below his PR, and finished 18th/52 overall; and newcomer Freshman Brody Ludman had a decent second start with a put of 22' 0", a new PR, finishing 21st/22 overall.

These and other pictures are available on the District's Google site.

On February 9, 2022, coaches at Cherokee, Haddonfield and Highland decided to schedule the first "Polar Bear" meet of the Winter season and, for one reason or another, it turned out well for all involved!

That said, let's dispel one fiction! Frequently, the philosophy behind a Polar Bear Meet is "weather be damned, we're racing!" That was not the case at yesterday's meet as it was a bright sun-shiny day and the temperature was over 50! Polar Bears in the region died from heat stroke!

Volunteer Coach Shaklee looked forward to seeing his guys race and he sent this comment on what he saw:

"With bright sunshine and temperatures near 50, it was about as good a day to race as you are going to get in New Jersey in February! Several of the Cherokee distance runners took full advantage of the conditions to lay down some new personal records!

"In the 800, Jameson Crozier was running his first track race of the year and it took him a lap to really get into it. Once he got going, however, he was able to close well and finish a close second in a time not far off of his best from last spring! Behind him, Nimai Kumar was having a huge day, setting a new PR by over 10 seconds to finish in third place! Anthony DiBatista also PR'd by a sizable amount - about 8 seconds - running confidently and aggressively from the start! Although not improving on his best time, Tyler Newton came close despite being pulled out way too fast through the first 200 meters!

"In the 1600, four of the five Cherokee competitors set new PR's! Frosh, Liam Tindall, led the way with a 9-second improvement to place fourth overall! Although having a bit of an off day, Danny Hassall still ran his second fastest time and finished fifth! Freshman, Zach Ciabattoni, running his first 1600, ran solidly to finish in sixth place! Behind him, Ethan Weisenberg was having a great day, knocking 4 more seconds off the huge PR he had recently set at a race in the Toms River Indoor Complex (The Bubble); and Ben Weiner followed suit as he also broke his PR from The Bubble by 4 seconds!

"Coming back in the 400 off a short rest, six of the nine runners above (Kumar, Hassall, DiBatista, Tindall, Weisenberg, Weiner) managed to set new PR's in that event!

"Overall, it was a very nice day for the Cherokee distance group!"

No additional comments are available.

These and other pics are available on the District's Google site.

Return to the index for Cherokee Track & Field Pictures, 2022.