Mid-February; it's still cold but the State Championships and the end of the season are upon us! GO CHEROKEE!

On February 11, 2022, many of Cherokee's Varsity performers returned to The Bubble for the NJSIAA State Sectional Championships, South where they competed against other top performers in the southern region of the state.

Coach Shaklee attended the meet and sent this review of the Distance Squad's performances.

"Although we were far from full-strength going into Sectionals, we were excited to finally be racing again!

"The first distance event of the meet was the 1600m and, due to the canceled meets from the Bubble collapse, Patrick Ditmars, Tommy Bromley and Bobby Poplau all raced from the unseeded section. Patrick took it out fast . . . a little too fast . . . knowing he had to race the clock and beat times from the seeded heat which would follow. Tommy went with him and, although he was off the pace a little, Bobby was also out fast. Patrick won the heat and recorded a time which held up for second place overall! Tommy PR'd by three seconds but, unfortunately, just missed qualifying by a second! Bobby, running the entire race alone, still PR'd but was definitely off of what he is capable of running.

"In the 800m, Josh Pawlik and Evan Pawlik were Cherokee's representatives and both looked good, winning Heat 1 (Josh) and Heat 2 (Evan). They finished 13th and 17th overall in a field of 45 runners! Both raced the distance for the first time and established working PR's!

"After just missing in the 1600m, Tommy Bromley decided to double back in the 3200m where he joined teammates, Bradley Popler and Andrew Free. Bradley ran a strong race despite not feeling 100% and advanced with a 5th place finish while knocking a second off of his previous PR! Tommy hung in there as long as he could and came away with a six second PR to finish in 9th place, completing a very nice double! Andrew also set a new PR which earned him a 14th place finish in the field of 33 runners!

"Both Patrick and Bradley are excited to advance to the State Group Championships and test themselves against the best runners in the entire state!"

Further comments to come from the Sprint coach but a casual review of the results suggests some decent performances! In the Open 400m Dash, both Seniors, Lucas Hatch and, overcoming a recent injury, Kevin Hess, had their best times of the season in the Open 400m! In the 55m High Hurdles and 55m Dash, Wilson Leung, Allie Hughes and Christian Sproesser set PR's: Wilson in both, Allie in the 55m Dash and Christian in the 55m Highs!

Our photographer expressed his appreciation for the help provided by Patrick, Bobby and Matteo on Friday night! Stay strong, boyos!

These and other pictures -- such as they are -- are available on the District's Google site.

On February 16, 2022, a small number of Cherokee athletes returned to The Bubble for the SJTCA Winter Meet # 15, a meet with many uncommon race distances. Not sure what the SJTCA had in mind when they set up this meet but, typically, the shorter distances are meant as "sharpeners" for upcoming longer race distances. For example, milers run the 1,000m, half-milers run the 600, etc.

Four prominent Cherokee distance runners entered two different races and did exceptionally well. In the 600m Dash, Tommy Bromley won the event as he clocked 1:28.67; Bobby Poplau took 7th in 1:31.03; Andrew Free took 11th in 1:33.64; and Bradley Popler took 14th in 1:33.65. Many of the times were close but the race for 1st must have been something! Tommy clocked 1:28.67 and his opponent from Oakcrest was almost attached to him, finishing 1:28.69! Oh Mama!

Several throwers also participated in this small meet. In the Shot Put, Senior Adam Lopez took 8th with a disappointing put of 35' 5"; Sophomore Anthony Maszlanka followed in 12th while putting his shot 31' 3.50", just under his PR; and newcomer Freshman Brody Ludman finished in 23rd, as he put his shot 21' 0.50", less than a foot from his PR!

For details on the meet: NJ.MileSplit.

Our photographer was unavailable for the meet.

On February 21, 2022, Coach Shaklee arranged a "time-trail" opportunity for some of his athletes to end their Winter season. He described it like this: "Yesterday, seven Cherokee athletes ran a 3200m time trial to end the winter season! Although it was pleasantly warm, it was also windy and that made the event 'more challenging'. With pacing help from Tommy, Bobby, Bradley and Patrick, the seven runners did the best they could in the conditions.

"For these athletes, It's now time for a short break and then the start of training for spring track!"

On February 22, 2022, a number of Cherokee's athletes -- less-experienced as well as top Varsity -- returned to The Bubble for the last of the SJTCA's Indoor meets, the SJTCA Winter Meet # 16.

Several Sprinter/Hurdlers took advantage of this opportunity and ended their Indoor Season with PR Performances! In the 55m Dash, Wilson Leung, Allie Hughes, Chris Martin and Jeremy Linden clocked PR's; and, in the 55m HH, Jeremy Linden and Liam McCloskey set PR's there! Christian Sproesser also competed in the Highs and just missed the PR he set last week at Sectionals!

Coach Shaklee brought nine of his Distance group and he sent his description of the evening!

"The Cherokee team had a successful evening at the Bennett Athletic Complex on Tuesday night! Things got started with the 4 X 800 Relay which featured athletes from the long sprinter group: Lucas Hatch, Josh Pawlik, Evan Pawlik and Kevin Hess. All four athletes set new 800 PR's to finish 4th, highlighted by the pair of 2:04 clockings from Lucas and Josh!

"Next up, Patrick Ditmars, Bobby Poplau and Andrew Free all ran well in the Open 800. Patrick negative split a sub-2:00 to take 2nd place, while Bobby knocked several seconds off of his previous best, running 2:03.14 for 3rd place! Andrew also knocked a couple of seconds off his PR, dipping under 2:11 and taking 7th place.

"Tommy Bromley and Bradley Popler were up next in the 1600. They ran away from the rest of the field to take the top two spots, both setting new PR's without the benefit of a competitive race! As both athletes negative split the race, it is clear they can run even faster when they get into a competitive event!"

"It was a good tune-up for both Patrick and Bradley as they prepare for State Groups on Saturday."

After shooting more than 1400 pictures at the meet -- most for MileSplit and RunningWorks -- our photographer did his usual complaining about the sub-standard photographic lighting at The Bubble. Pictures are shot at ridiculously-high camera settings and the results are always "marginal" and can't really be fixed. As Mom used to say, "Dinty, ya can't polish a turd!"

That said, these and other pictures are available on the District's Google site.

On February 26, 2022, the NJSIAA State Group Championships were held at The Bubble and the only two Cherokee Boys to qualify for this state-wide championships were Patrick Ditmars in the 1600m and Bradley Popler in the 3200m!

Coach Shaklee and the guys were all excited and a little anxious as the day proceeded. Maybe Patrick more than others because, after the gun for his race sounded, Patrick took off in the wrong direction and was only righted when an official intervened! After that everything went as normal! GO PATRICK! ; < ) 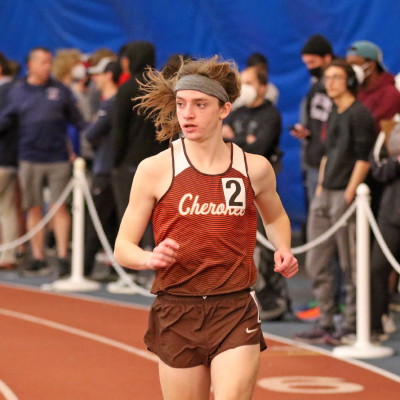 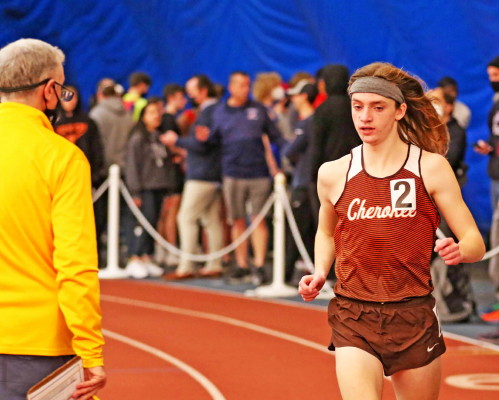 Long story short, Patrick was stuck in the slow heat of the 1600m and he and the coach planned his race meticulously! Essentially, don't lead but stay with the leaders through the first 1200m of the race and then finish the final 400m in a controlled sprint, clocking a time fast enough to advance to the State's Meet of Champions the following weekend! Patrick carried out the plan perfectly, took 1st with an impressive Indoor PR, and advanced! Yikes!

Although he raced well, Bradley didn't have the same success as Patrick and did not advance. Forced to wait hours until his event, Bradley stepped-up and, through most of his race, ran competitively but, in the last 400 meters or so, he began to fall off. Most striking was his PR effort: only 0.15 off his best! That deserves a "Yikes! too!

These and other pictures from the meet are available at the District's Google site.

Mae Kellert of MileSplit, multi-tasking, took these pics from her video perch in the scaffolding:

AND THEN THERE WAS ONE!

Really, Cherokee High School and we had only one athlete who qualified for the Indoor Meet of Champions?! . . . ONE?!

Think about it . . . make a commitment . . . make a plan! June 18th will come very soon and we want a bunch of qualifiers there to race, throw, hurdle or jump with Patrick Ditmars because he plans to be there! LET'S GO CHEROKEE! 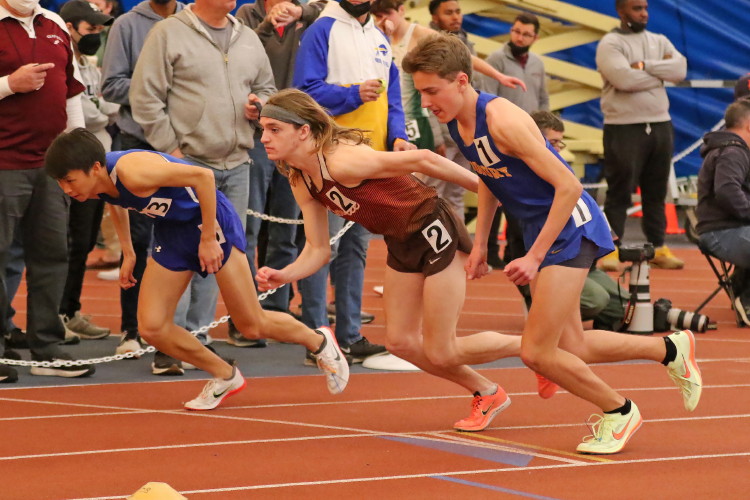 As for non-qualifiers who showed up to encourage our one qualifier, there were "The Three Amigos," Joe Natoli, Matteo Evola and Bobby Poplau! Glad to see you, though we still wonder how you managed to sneak into the joint! 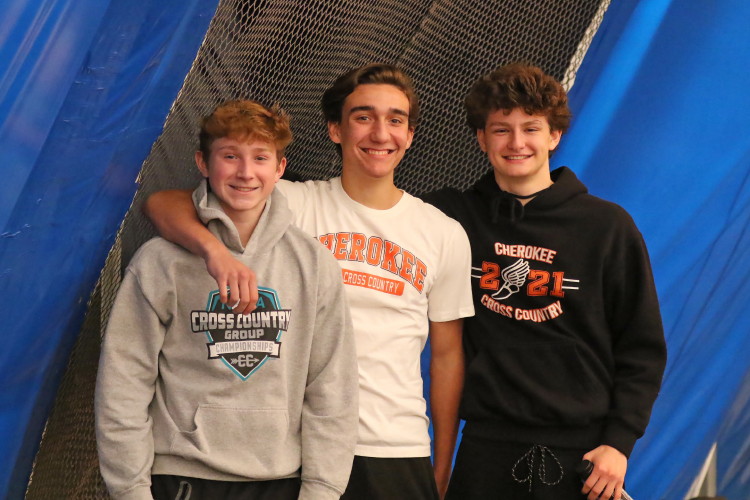 "Patrick Ditmars was the team's only representative at the State Indoor Track Meet of Champions held at the Bennett Athletic Complex in Toms River, NJ.

"With very little racing experience this season, Patrick found it difficult to navigate the early tactical laps of his race and he expended a lot of energy trying to get into position while fending off the elbows of his competitors. Although the race did not go as well as Patrick had hoped, he still managed to run his fastest time of the winter season and he came away from the experience wiser and better prepared for the championship racing to come this spring! His training has gone very well this winter and both he and his coaches are excited to see what he will accomplish on the track this spring season!"

These and other pics from the MOC are available at the District's Google site.

Return to the index for Cherokee Track & Field Pictures, 2022.