The year began in mid-March with a series of unscored scrimmage meets against Highland Regional, Timber Creek and Rancocas Valley Regional High Schools. The Highland and Timber Creek meets were marked by rain and cold temperatures, and no pictures were taken. However, there are a few from the Rancocas Valley meet. (Click on pictures for larger versions.) 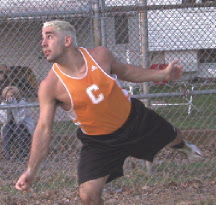 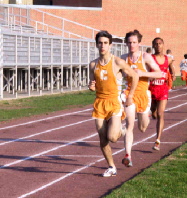 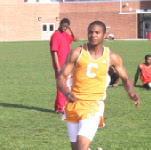 The 1st of April, 2003 was marred by clouds, wind, and intermittent rain but Cherry Hill East arrived on time and the first dual meet of the season got underway. Cherokee's athletes had a surprisingly easy time with C.H. East, sharing the sprint/jump points but then losing only one point in the distance and weight events. It was, however, another difficult day for the photographer and only a few pictures are available:

Saturday, April 5th was also ruined by clouds, intermittent rain, and muddy conditions. Coach Shaklee's top runner, Keith Krieger, trained through the meet and did not compete, and another key distance runner was unable to run because of a fall the evening before. As a result, the coach tested various running combinations for the more important relay meets in the future. Although conditions were especially difficult in the weight areas, the Shot Put Relay team won their event. The setting was also poor for picture-taking but here are some of the better shots:

Yesterday, April 7th, it snowed close to two inches here in Southern New Jersey, and today was another unpleasant day: gloomy, intermittent rain, with temperatures in the high 30s. Some Spring! However, the meet was a barn-burner with Krieger beating Deichert in the 1600, and both Freeman and Bredeck (running only 1 second slower than the Freshman record set by Krieger) beating him in the 3200. Andes, another Freshman, won the 800 in 2:05 (still a bit above the Freshman record of 2:02.7 set by Ridenour in 1999). Chao won the 400IH, Krawaiter took second in the 100m, and Whirledge won the 400 and took second in the 200. Dalessio won the shot, throwing a PB of over 50'.

Sadly, the meet could not be finished because the LJ/TJ pit was waterlogged, and the vault mats were not available. These three events will be contested on May 1st. The score stands at: Cherokee, 68; Eastern, 45. Cherokee needs only 3 points to win but the LJ, HJ and Vault are among Eastern's strongest events, while they are among Cherokee's weakest.

Weather conditions were so poor that only a few pictures are worth showing:

Here are a few pictures from the second part of this meet:

Return to the index for Track Pictures