On March 20, 2021, Cherokee hosted The Cherokee Winter Distance Invitational Sponsored by RunningWorks, 2021, an unusual opportunity for distance athletes from around the region to compete in the traditional distance events: the 800m, 1600m and 3200m Runs!

"Five Cherokee athletes competed in the Cherokee Winter Distance Invitational on Saturday, March 20th. On a perfect day for running - sunny, a very slight breeze and temperatures ranging from the upper 40s when the 3200 went off to the mid-50s by the end of the meet - all five runners came away with new personal records.

"Although the first heat of the 3200 did not go as well for Aiden Dickinson as he would have liked, it was really his first experience running in a top varsity field. The uneven pace made things more difficult, and Aiden struggled over the last mile, but he still came away with a new PR. This shows just how far he has come in a short time that he could run a sizable PR and still consider it a disappointment. As he gains more experience in this type of competition, he will be even better!

"In Heat 2 of the 3200, sophomore Patrick Ditmars found himself up against an excellent field in the first 3200 of his high school career! Although he lost contact with the front pack early and had to run most of the way alone, he did a great job of keeping his concentration and, as a result, he placed 11th and ran sub-10:00 in his first attempt at the distance! That time puts Patrick at #43 on the all-time Cherokee 3200 list!

"Another sophomore, Tommy Bromley, was up next in a very competitive 800 field. Tommy ran smart over the first 400 and despite losing his concentration just a bit for the next 200, still finished strong to place 11th with a new PR! With some good training going forward, it looks like Tommy could be knocking on that sub-2:00 door by the end of spring track!

"Freshman Nick Kuenkel was up next in Heat 1 of the 1600. Unfortunately, the top runner in the heat broke away early and the pack kept the pace slower than Nick would have liked. Despite this, he ran an excellent tactical race, finished with a fast last lap, and came away with a new PR and a 2nd place finish in the heat (13th overall)! It is clear from this that Nick has a lot more in him and should be able to take aim at the Cherokee Freshman 1600 record later this Spring!

"Finally, Senior Brett Shea, coming back from time off due to an ear infection, ran against an excellent field in the seeded heat of the 1600. He may not have been 100% back from illness but he had enough to finish 7th with a 6 second PR! Brett's time puts him #19 on the All-Time Cherokee 1600 list and it's clear he will be much faster (and farther up on the list) by the end of the Spring!

"The team will race one last time against Cinnaminson this week and then take a short break before starting back into training for the Spring season."

Official details from the meet at: NJ.MileSplit. Additional race information including splits and videos at: Tomahawk Timing.

On March 25, 2021, Cherokee hosted the final event of the virus-disrupted Winter Season, a Dual Meet between Cherokee and Cinnaminson High Schools!! The schedule was modified, leaving out a few events and no team scores were kept but, overall, Cherokee did quite well!

Coach Shaklee got up early and sent the following comments!

"On Thursday, March 25th, the team took to the track for the last winter meet of the season, a dual meet with Cinnaminson. The conditions were good - overcast, low 60's and almost no wind. The nine Cherokee distance athletes who competed in the meet took advantage of those conditions to record some excellent performances!

"In the 1600, eight of the nine runners set new personal records, and Patrick Ditmars and Nick Kuenkel took the top two spots against some good young runners from Cinnaminson! Not only that, but many of the PR's were sizable - Patrick Ditmars - 7 seconds, Matteo Evola - 11 seconds, Danny Hassall - 13 seconds, Ethan Weisenberg - 15 seconds and Bobby Poplau - 25 seconds!

"The outstanding Athlete of the Meet was definitely Patrick Ditmars who ran a big negative split to win the 1600 and dropped a 53.0 on the anchor of the 4 X 400m Relay, the fastest split of the year for the team!" GO PATRICK! (It's the hair! Further evidence is available on the Alums page where long-haired Chase Miller crushed almost all of his college opponents in TCNJ's Conference Championships last Saturday!

The meet results available at: NJ.MileSplit.

In the team picture below, two options are apparent: (1) A number of team members are "not pictured," so maybe no one told the team that Yearbook pictures would be taken today; or (2) the "rule" in Winter Track is that no one ever wears matching clothes except in competition! A third option? You decide. 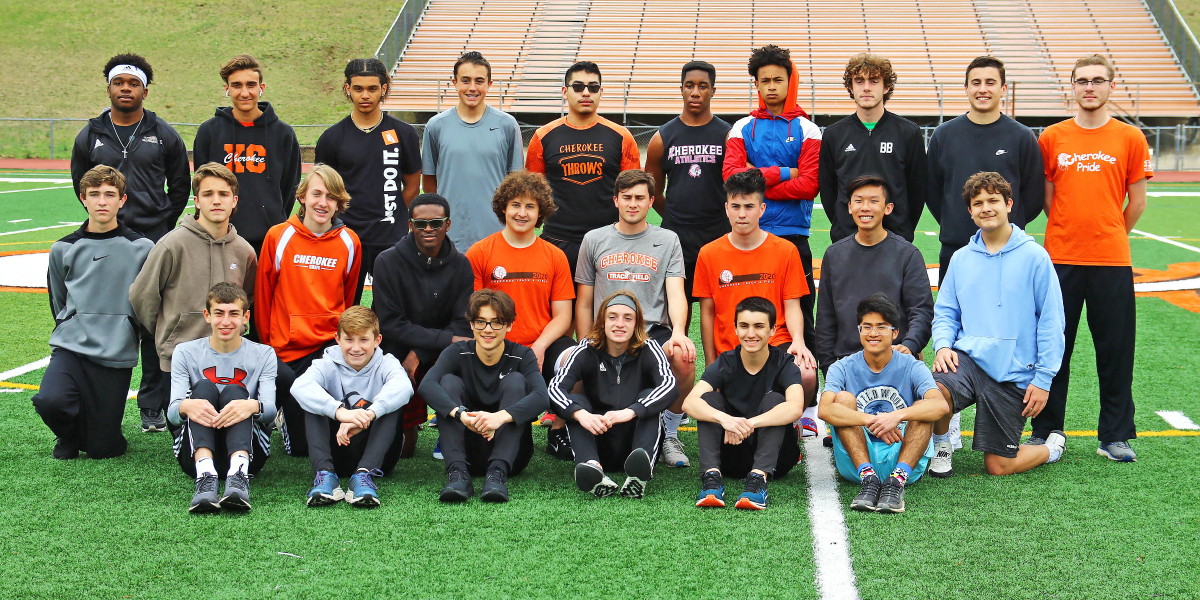 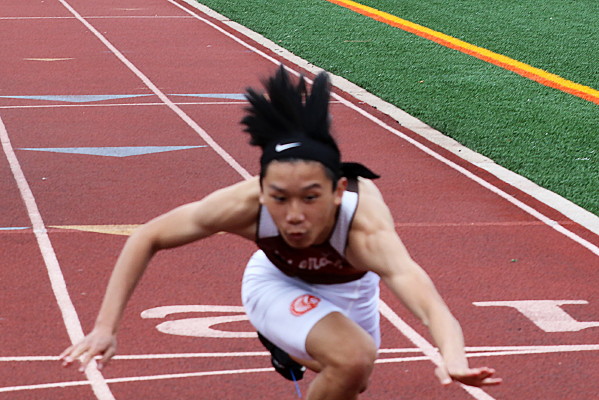 Here is a random selection of pictures from the meet. All of the season's pictures will be made available to team members soon!

In the past, at the end of the season, we've distributed the pictures either as prints or through USB Flash Drives. Beginning this season, the entire season's pictures, with many that were not posted on the site, are available through the District's Google Drive Account! Check them out at: Winter Season at Google.

Return to the index for Cherokee Track & Field Pictures, 2021.